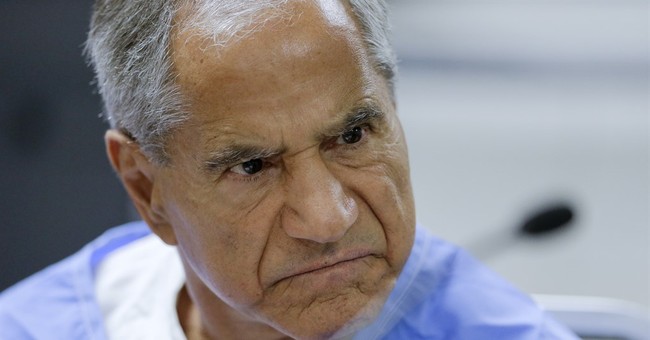 The man responsible for Sen. Robert F. Kennedy's assassination in 1968, Sirhan Sirhan, has been imprisoned for more than 50 years. On Friday, he was stabbed by another inmate at the Richard J. Donovan Correctional Facility near San Diego, the Associated Press reported.

“Officers responded quickly, and found an inmate with stab wound injuries. He was transported to an outside hospital for medical care, and is currently in stable condition,” the California Department of Corrections and Rehabilitation said in a statement.

Although Sirhan's identity was initially withheld, a government source confirmed with the AP that he was the one who had been stabbed.

According to Cal Fire spokesman Capt. Thomas Shoots, when they arrived on the scene, the inmate had been stabbed in the neck.

The inmate responsible for stabbing Sirhan was identified and placed in administrative segregation while an investigation is conducted.

Sirhan, 75, has been imprison since 1969, roughly a year after Sen. Robert F. Kennedy was assassinated. Then-presidential candidate Kennedy was shot and wounded while talking to supporters at the Ambassador Hotel in Los Angeles a little after midnight on June 5, 1968.

Originally, Sirhan was originally facing the death penalty. California stopped capital punishment for a brief period of time, at which point Sirhan was sentenced to life in prison.

For the majority of his sentence, Sirhan had been kept in protective housing at Corcoran State Prison in Northern California. He asked to be housed with the general population, at which point he was transferred to the Richard J. Donovan Correctional Facility near San Diego.

According to the Los Angeles Times, Sirhan has been up for parole multiple times. He was denied parole each time. His next scheduled parole hearing is scheduled for February 2021.