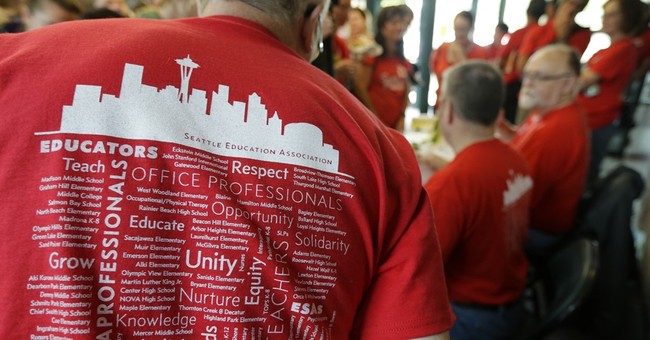 A Seattle Public Schools teaching assistant with a history of terrible job performance, including showing up to work smelling like alcohol and putting a special needs child in a headlock, has now been arrested and fired for alleged rape, reports the Seattle Times.

Albert C. Virachismith was fired by Seattle Public Schools in February after a 9-year-old boy accused the substitute teacher of sexually assaulting him in a bathroom. But, as noted by the Seattle Times, the fact that Virachismith had previously violated his “last chance pact” crafted by his union representatives and the school district should have earned him his termination months before this alleged rape occurred.

Prior to the 2018 rape accusation, Virachismith had “missed work 21 times, routinely showed up late or reeking of alcohol, disrupted class with loud outbursts, even one time 'playfully' put a special-needs student with impulse-control issues into a headlock” during the 2016-2017 school year. According to the Seattle Times, he "missed 13 of the first 65 scheduled days of school in 2016, and repeatedly arrived late — sometimes, by several hours — on multiple days."

Likewise, "after one unplanned absence from work, Virachismith emailed the principal, claiming he failed to show because he’d been arrested. The next day, he met with an assistant principal and 'admitted that he had lied and made up the story.'"

But, only on the second time that Virachismith showed up to work smelling like booze and clearly impacted by alcohol did the school district move to fire him in August 2017.

This proposed firing was stopped by his union, the Seattle Education Association, who challenged the grievance and fought for him to continue working in the district. Just weeks after the school district tried firing him, Virachismith returned to work in September 2017.

The Seattle Education Association and his employer formulated what they called a “Last Chance Settlement Agreement” which served as guidelines, that if broken, should have resulted in Virachismith’s firing.  Despite clear rules and prohibitive statutes, Virachismith broke the agreement within two months by “failing two urine tests and repeatedly missing required alcohol-treatment sessions.” He continued to miss 12 more alcohol-treatment sessions and continued to miss work. He was allowed to sub at seven schools during the 2017-2018 school year.

Despite his numerous charges of clearly improper behavior, the Seattle school district defended keeping Virachismith as an employee.

“Until Jan. 29, 2018, there were no indications or reports of inappropriate interactions of a sexual nature at SPS involving Virachismith,” Seattle school district spokeswoman Kim Schmanke said in a statement. Adding, the union and district "followed progressive disciplinary steps to address the absences, tardiness, and indications of an alcohol problem.”

Once he was accused of rape, the district “immediately restricted him from taking any assignments and banned him from all schools grounds upon receiving the allegation. We also moved quickly to terminate his employment,” Schmanke noted.

Virachismith's personnel records exposing these issues were released last week after the newspaper filed a Public Records Act request. Prosecutors could not comment on Virachismith's rape allegations as they are part of an on-going trial which is scheduled for next month.