HERO: Meet the Man Who Tackled the Waffle House Shooter 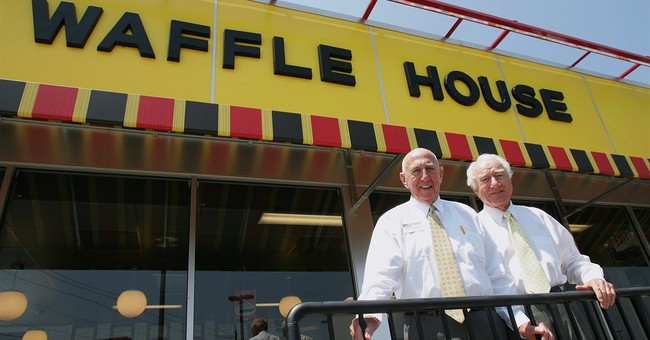 Earlier today, a madman with a gun opened fire on a Waffle House in Antioch, Tennessee. But one hero ran towards the bullets instead of away from them. Police say James Shaw Jr.’s actions saved many lives.

"James Shaw Jr., 29, said after feeling cornered he saw an opportunity to tackle the man shooting into an Antioch Waffle House. He said he doesn’t feel like a hero.

Police spokesman Don Aaron told reporters Sunday morning that the Waffle House hero rushed the suspected shooter, disarmed him and threw the assault rifle he was carrying over the counter.

“I don’t really know, when everyone said that (of being a hero), it feels selfish,” Shaw Jr. “I was just trying to get myself out. I saw the opportunity and pretty much took it.”

Shaw Jr. said he was at a fraternity house party before heading to the Bell Road Waffle House at about 2:30 a.m. with some friends. They left soon after because it was too packed, he said."

Shaw Jr. was determined to stop the shooter.

As the suspect came through the door, he needed to reload, Shaw Jr. said. That’s when he said he rushed him.

“When he came in, I distinctively remember thinking that he is going to have to work for this kill,” Shaw Jr. said. “I had a chance to stop him and thankfully I stopped him.”

He added: “I grabbed the gun and kept it down. He had one hand on it. I pulled it away and threw it over the bar.”

The suspect then ran outside and escaped. Shaw Jr. did not follow him because he did not know if the suspect had any other weapons on his body.

Police spokesman Don Aaron told reporters Sunday morning that the Waffle House hero rushed the suspected shooter, disarmed him and threw the assault rifle he was carrying over the Waffle House counter. https://t.co/LPUNVIitxR

After suffering a few scrapes on his elbow and being discharged from the hospital, Shaw Jr attended church with his mother.

James' aunt just told me that after being discharged from the hospital, he went home & changed clothes... and is now "in church with his mama. We are so proud of him." https://t.co/LNnyRUvCSH