The Catholic Church Actually Has Pretty Good Standards For Immigration 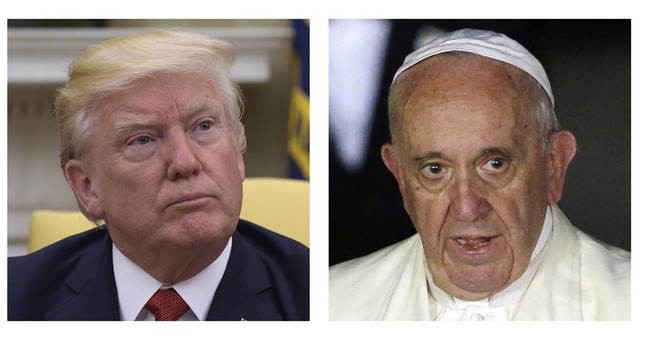 Many people, including many of the Faithful, wrongly believe that the Roman Catholic Church’s stance towards immigration is one of open borders and multiculturalism. Yet, the Catechism of the Church is very clear in its  principles that this is not the case. Neither the country is expected to welcome in all immigrants with out any limits whatsoever, nor is the immigrant supposed to ignore the culture, laws, and civic responsibilities of that nation.

For background, there has been only one instance where I walked out of Mass in the middle of a priest’s homily due to the content of his message. This was the summer of 2010 at St. Catherine of Siena Parish in Manchester, NH. I forget what exactly was occurring in the news that specific weekend, but Father took it as an opportunity to lambast Sarah Palin, the Tea Party, and opponents of Obamacare. About 12 other individuals walked out as well. Unfortunately, the way the parking lot was set up, my car was blocked in and I had to wait until Mass was over to leave. I decided to debate the priest after Mass. The conversation lasted 20 minutes and he told me Conservatives were bad Catholics.

Aside, from that experience, I have never been privy to a Sunday where a priest delves into politics in such a fashion as that. Today, in D.C., I thought I was going to have a similar experience.

This Sunday’s first reading is Exodus 22:20-26. The first line of this reading is “You shall not molest or oppress an alien, for you were once aliens yourselves in the land of Egypt.”

As Father began his homily, he remarked how poignant this passage was given the surrounding debate over immigration in today’s society.

But rather than force feed his parishioners with a political opinion one way or the other, Father took a much more subdued approach.

“I’m just a priest, why would you want to hear my political opinion? Instead, I am going to set forth the church’s teaching, and it’s your job to discern how to best apply that to the so called secular world.”

He went on to highlight what the Catechism of the Catholic church actually teaches. The "catechism is a text which contains the fundamental Christian truths formulated in a way that facilitates their understanding."

In Church teaching 2241, the Church offers a very reasonable and fairly balanced approach to immigration. The nation is called to accept immigrants to “the extent they are able” and protect their inalienable rights. The immigrant, however, is "expected to respect with gratitude the material and spiritual heritage of the country that receives them, to obey its laws and to assist in carrying civic burdens."

2241 The more prosperous nations are obliged, to the extent they are able, to welcome the foreigner in search of the security and the means of livelihood which he cannot find in his country of origin. Public authorities should see to it that the natural right is respected that places a guest under the protection of those who receive him.

Political authorities, for the sake of the common good for which they are responsible, may make the exercise of the right to immigrate subject to various juridical conditions, especially with regard to the immigrants' duties toward their country of adoption. Immigrants are obliged to respect with gratitude the material and spiritual heritage of the country that receives them, to obey its laws and to assist in carrying civic burdens.

Compare that principle to President Donald J. Trump’s stance on immigration and you will find the two are not at odds. In a statement on September 5th, 2017, the executive branch called for immigration reform that rids the nation of immigrants who have committed crimes, promotes economic prosperity for all Americans, and reforms the current immigration system so that immigrants can come here legally.

In that statement, Trump said,

Getting rid of drug dealers and gang members is not the same as deporting law-abiding illegal aliens. In fact, Trump makes it very clear that those illegal aliens who are here respecting the laws of the land, contributing, and working to earn a living that they otherwise could not in their native country is not law enforcements concern.

“The decades-long failure of Washington, D.C. to enforce federal immigration law has had both predictable and tragic consequences: lower wages and higher unemployment for American workers, substantial burdens on local schools and hospitals, the illicit entry of dangerous drugs and criminal cartels, and many billions of dollars a year in costs paid for by U.S. taxpayers.  Yet few in Washington expressed any compassion for the millions of Americans victimized by this unfair system.  Before we ask what is fair to illegal immigrants, we must also ask what is fair to American families, students, taxpayers, and jobseekers.”

President Trump is essentially saying that our failure to enforce the laws of the land for so long is now limiting the extent to which we are capable of accepting foreigners. Because of that, reform is needed as well as immediate enforcement of current laws.

Again, Church teaching 2241 says it is perfectly okay for nations to have certain rules and orders that are enforced pertaining to immigration. This would also make it proper to believe that the RAISE act, which calls for higher skilled immigrant workers, is also in line with the Church’s guidelines.

The Catholic Church finds it reasonable that government must have legal limits and standards for immigration. In turn, immigrants are called upon to become part of civic life, to respect the spiritual heritage, and embrace the culture. That sentiment is in line with the United States motto: “E Pluribus Unum" - out of many one.

This would indicate that it is not somehow immoral to expect immigrants to pledge allegiance to America, obey our laws, or to learn American civic principles such as self-responsibility, limited government, and other democratic-republic ideals. If immigrants want to come and live in a nation, the church orders that they understand and take seriously their duties in their country of adoption.

Now Catholic critics of Trump's immigration reform and this article are going to cite the fact that Pope Francis claimed that President Trump was not "pro-life" for his stance on illegal immigration. But even Pope francis acknowledged he was not completely informed about the law nor Trump's position.

The Pope acknowledged that he was not familiar with the specifics of DACA. "I think this law comes not from parliament but from the executive," the Pope said. "If that is so, I am hopeful that it will be re-thought."

A greater examination of Trump's proposals compared side by side with church teaching show both the catechism and Trump's current immigration reform are copacetic.

The debate over illegal aliens is currently raging on Capitol Hill. President Trump ordered Congress to compromise and make a reasonable deal by February to handle the millions of illegal aliens who are in the country under the Deferred Action for Childhood Arrivals program that was started by President Barack Obama.

Members of Congress would be wise to follow Catholic Church teaching 2241. We must examine how many immigrants can we actually afford to take in. And once they are here, what exactly are we doing to promote respect for our civic burdens.