NFL To Dallas Cowboys: Shut The Hell Up About The National Anthem 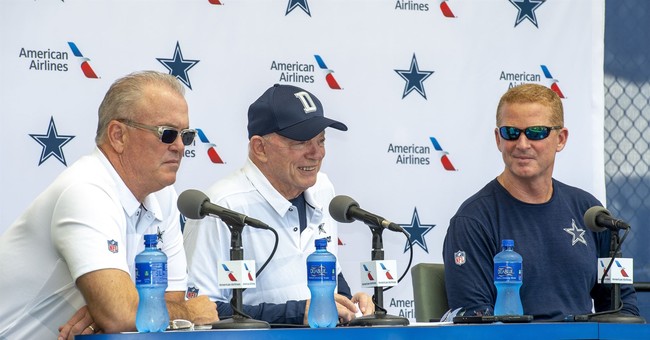 Well, the national anthem wars are not over at the National Football League, but they don’t want people talking about it, or at least—they don’t want the Dallas Cowboys talking about it. The NFC East team has reportedly been told by the NFL’s front office to more or less shut the hell up about the anthem. Dallas quarterback Dak Prescottsaid over the weekend that the anthem protests took away from the game. This came after Cowboys owner Jerry Jones said his team would have a mandatory stand policy for The Star-Spangled Banner last week (via The Hill):

The quarterback for the Dallas Cowboys said Friday that team owner Jerry Jones's policy on standing during performances of the national anthem would not affect him because he would "never" protest during the anthem's performance.

Dak Prescott told reporters that the performance of "The Star-Spangled Banner" before games was not the "time or venue" for player-led protests against police brutality and racism.

“It has no affect to me because I do exactly what I’m doing and what I’ve said and what I stand by,” Prescott said of the policy. “Whether I was wearing the star or not, whether I was playing for Jerry Jones, Stephen Jones or any other owner. I believe in what I believe in, and that’s that."

“I’d never protest during the anthem, and I don’t think that’s the time or the venue to do so," he added. “The game of football has always brought me such peace, and I think it does the same for a lot of people."

"[W]hen you bring such a controversy to the stadium, to the field, to the game, it takes away ... from that," he said. "It takes away from the joy and the love that football brings a lot of people."

Yes, Prescott caught some heatfor these remarks. The NFL knows this is a bad issue for them. NFL ticket sales plummeted, as did network ratingslast season with this nonsense. Of course, no one should be fired or suspended for taking a knee, despite what President Trump called for last year, but with regards to being pilloried on social media and elsewhere—this is what you get. No one is saying they should be thrown into the gulag, but if you’re going to do this be prepared to be torched—big league.  Even in deep blue New England, Patriots fans thought it was a sign of disrespect. When people view it as a desecration of those who have served, and especially those who have died defending our country—there is not winning this issue. The pervasive explaining for these protests was the big sign that the pro-taking a knee side had lost. Trump had won. And he will continue to win as long as he keeps forcing the Left into defending the indefensible with these culture battles. In October, The New York Timesreported on the Trump effect over the NFL. The owners knew the stakes in this fight…and they knew they were not on the winning side:

N.F.L. owners, players and league executives, about 30 in all, convened urgently at the league’s headquarters on Park Avenue in October, nearly a month after President Trump began deriding the league and its players over protests during the national anthem.

It was an extraordinary summit; rarely do owners and players meet in this manner. But the president’s remarks about players who were kneeling during the anthem had catalyzed a level of public hostility that the N.F.L. had never experienced. In the spirit of partnership at the meeting, the owners decided that they and the players should sit in alternating seats around the large table, which featured an N.F.L. logo in the middle.

“Let’s make sure that we keep this confidential,” Commissioner Roger Goodell said to begin the session.

The New York Times has obtained an audio recording of the roughly three-hour meeting, and several people in the room corroborated details of the gathering.

The New England Patriots owner Robert K. Kraft pointed to another “elephant in the room.”

“This kneeling,” he said.

“The problem we have is, we have a president who will use that as fodder to do his mission that I don’t feel is in the best interests of America,” said Kraft, who is a longtime supporter of Mr. Trump’s. “It’s divisive and it’s horrible.”

The owners were intent on finding a way to avoid Trump’s continued criticism. The president’s persistent jabs on Twitter had turned many fans against the league. Lurie, who called Trump’s presidency “disastrous,” cautioned against players getting drawn into the president’s tactics.

“We’ve got to be careful not to be baited by Trump or whomever else,” Lurie said. “We have to find a way to not be divided and not get baited.”

The Buffalo Bills owner Terry Pegula sounded anguished over the uncertainty of when Trump would take another shot at the league. “All Donald needs to do is to start to do this again,” Pegula said. “We need some kind of immediate plan because of what’s going on in society. All of us now, we need to put a Band-Aid on what’s going on in the country.”

Well, the league then had a stand policy for the anthem prior to the 2018 season, which was then suspended because players didn’t like it. Overall, the NFL has tried to have it both ways in this debate, twisting into a pretzel, and leaving themselves bloodied and beaten in the process.