Dallas Cowboys QB: I'd Never Protest During the Anthem 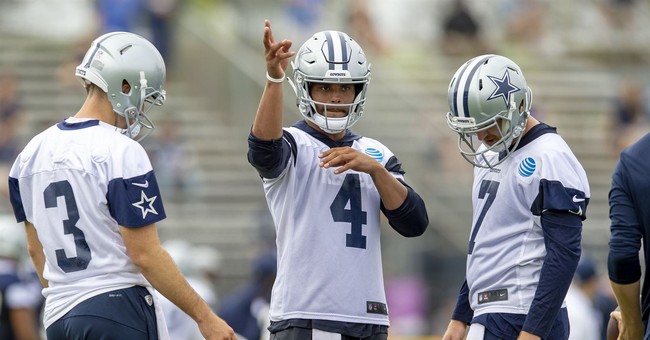 Yesterday, Dallas Cowboys quarterback Dak Prescott voiced concerns regarding fellow players who protest police brutality during the playing of the national anthem before the start of each National Football League game.

"When you bring such controversy to the stadium, to the field, to the game ... it takes away from the joy and to the love that football brings a lot of people," Prescott added. The game, he says, brings him and others a "sense of peace" and the protest detracts from the experience for fans and players.

As reported by Fox News, "the NFL and its players association recently issued a joint statement saying that 'no new rules' related to anthem protests would be enforced while the two sides try to find “a solution" on the issue."

NFL players across the league began kneeling during the national anthem, rather than standing, in order to bring attention to police brutality against minorities. The protest was started in 2017 by then-49ers Colin Kaepernick and continued through the 2017 season. Many found the protest to be disrespectful of the sacrifices that so many have made for the country as well as unpatriotic toward America's values itself.

President Donald Trump weighed into the fray last fall saying if he was an NFL team owner, he would tell his coach to "get that son of a b*tch off the field." The protests continued throughout the NFL season and ratings declined. It is unclear what protests will occur this year.