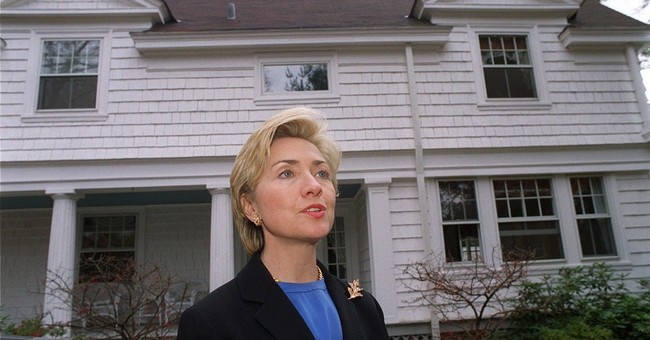 Hillary’s email trainwreck has some of Hillary’s staunchest supporters “really freaked out,” according to National Journal’s Ron Fournier. He said on CNN earlier this month that he got calls from Democrats in awe of the email development and unimpressed with how the former first lady conducted herself at the UN presser explaining her actions. Even die-hard Clinton supporters, people who want her to run unchallenged for the Democratic nomination, are worried, or at least very uneasy about the whole situation. As Cortney aptly noted, some Democrats are saying this is what happens when you “put all your eggs in one basket.”

So, does Clinton’s email flap mean Democrats are lining up to challenge her? Well, sort of -- there’s some folks trying to motivate California Gov. Jerry Brown, Al Gore (I’m not kidding), Sen. Elizabeth Warren, and Vice President Joe Biden to consider 2016 runs. Yes, it’s quite the motley crew of people who’ve never been successful in mounting national campaigns for president and one senator who won because her state is insanely Democratic.

First, let’s go to every progressives favorite, Sen. Warren. In February, Warren sent a rather enigmatic letter to Democrats through the Democratic Senatorial Campaign Committee (DSCC) saying, The question is whether enough Democrats will stand up -- stand up to corporate money and powerful interests and stand up for regular people, working families, and progressive values…I’m in — what about you? Will you donate by midnight to take back the Senate?" Many on the left, like Moveon.org and Democracy for America are taking this as a sign that she could be swayed to run in 2016. Hillary’s ties to the financial industry has drawn the ire of the more progressive wing of the Democratic Party, and this email fiasco has given them fuel to fan the flames of a potential Clinton challenge–with Warren leading the way:

Democracy for America, MoveOn.org and Ready for Warren all issued statements within minutes of each other, touting Warren’s record as a middle-class advocate and urging her to run.

Timing notwithstanding, the three groups disavowed any interest in the ongoing email flap, but instead said their efforts to draft Warren were driven by the issues. And they all agreed that Warren’s harsh criticism for Wall Street and middle-class advocacy is the right prescription for the party.

“Primaries are decided on the issues, not where candidates store their emails,” said Neil Sroka, communications director for Democracy for America.

“The draft Warren movement is less concerned with the frenzy surrounding Secretary Clinton's emails than we are with standing up, on behalf of millions of working families, to those who are rigging the system in favor of the rich and powerful,” added Erica Sagrans, campaign manager for Ready for Warren.

“A contested nomination will strengthen the Democratic Party by holding candidates accountable,” said Ready for Warren’s Sagrans. “Senator Warren is already shaping the national conversation on key issues, but not having her in the race would weaken our chances of having a real warrior for working families in the White House.”

Well, for starters, Warren has said she isn’t running for president. Though she has friends, many will simply not give the money necessary to mount a successful challenge. Why? They won't leave Hillary. Then again, it's reported that Warren could split the moneyed interests in Hollywood; a lot of folks in the business have soured on Hillary, thinking she's too centrist. David Frum noted that the Senate isn’t an institution designed for a raging progressive like Warren. So, she could toss her hat into the ring.  As Dan wrote earlier today, The Boston Globe wants her to mount a challenge to Clinton. Clinton knows her growing influence in the party given that she and Warren had a sit down in February to discuss, amongst other things, policy ideas. Is this the beginning of Clinton/Warren 2016?

In a throwback to the 1990s, California Gov. Jerry Brown, who’s pushing 80, was giving off 2016 vibes of his own until this Sunday’s Meet The Press. Citing his age, Brown said if he were 10 years younger, he would mount a campaign for the 2016 Democratic nomination. Bad blood reportedly still exists between the two camps; Brown accused then-Gov. Bill Clinton of funneling money to Hillary's law firm for state business in the 1992 presidential election, which drove Bill into a rage.

Al Gore was creating buzz. Noah wrote about it. Ezra Klein of Vox  had a post saying the former vice president should run, citing his ability to fundraise his possible 2016 bid thanks to his resume as a credible candidate:

Hillary Clinton is crushing her rivals in the invisible primary. The result will be a lopsided race once the campaign turns visible: her likely challengers don't have the name recognition, party support, campaign organization, or funding necessary to force a real contest.

Gore does. He begins with a powerful asset in presidential politics: credibility. As a long-serving senator and a two-term vice president, Gore has more direct political experience and at least as much claim to the triumphs of the 1990s as Clinton. He's also won more elections than Clinton — including the popular vote in a presidential campaign. There are few Americans who don't at least know his name. There is no one in the Democratic Party who won't at least take his call.

But Gore's experience and contacts now reach beyond politics — and into venues that would be enormously helpful to him if he wanted to fund an expensive race. He serves on the board of Apple, as a senior adviser to Google, and at the mega-venture capital firm Kleiner Perkins Caufield and Byers. He's also carved a path through finance and telecommunications, becoming fabulously wealthy — richer, even, than Mitt Romney — as an investor and mogul.

The problem, Klein notes, is Gore. Oh, and the fact that he’s probably not running for president.

Lastly, there’s Vice President Joe Biden. Though he hasn’t made any of his 2016 intentions known, Draft Biden is up and running. It’s also “appropriately unpolished,” according to National Journal:

The new Draft Biden 2016 effort is a PAC and a fledgling website, RunBidenRun.com, with a full-time staff of two. When the site went live, an unfortunately cropped photo of the vice president's chest—cutting off his head—greeted viewers, and the "Donate" page trumpeted a goal of just $5,000, while showing that $5 had been raised by Tuesday afternoon.

What the effort does have, though, is a network of former Obama for America volunteers who are resolved to boost someone with a last name other than Clinton or Bush to the White House. That includes Draft Biden PAC's organizing director, William Pierce, a 26-year-old who has worked as a field organizer for Democrats, most recently Chicago mayoral candidate Bob Fioretti.

Despite the vice president's lack of a campaign operation, Draft Biden hopes to persuade him to run. For starters, there's a petition—which currently has roughly 2,000 signatures—urging him to get in the race. The group plans to build on what Pierce said is Biden's grassroots support throughout the country, eventually hiring field staff in key primary states "who can mobilize the grassroots army that we're going to have in those states."

Draft Biden isn't deterred by the millions raised by other candidates. With a stated fundraising goal of just $5,000, the group isn't planning to produce "glitzy TV commercials" or an expensive bus tour, because, Pierce said, "money is the root of all evil, we feel."

Allahpundit wrote, “It’s not capital-C Crazy” if Biden runs, though he aptly noted that we should probably drink some special Kool-Aid if he–in some bizarre alternate reality–becomes an unstoppable juggernaut in the general. At the same time, despite being saddled with Obama’s baggage, there really isn’t a reason for Biden not to mount a 2016 bid. Yes, he’s old, so this would be his swan song–win or lose. Vice presidents are usually lost to history after their service, and seldom does the vice president achieve a higher office than having the honor of being a pulse away from occupying the Oval Office.

Last December, I wrote that if he does run, Hillary has to debate him, whereas she could sit idly by and let her would-be opponents asphyxiate from a lack of oxygen from the media and donors. You can’t say the same for the Vice President of the United States, even if he’s trailing you. Also, can you imagine that debate? “Dead broke” lady vs. “butt buddy” Biden; where’s the popcorn?

Lastly, Biden has often told this to his colleagues about his secret to winning.

“You have to figure out what’s worth losing over,” he says. In 2016, he really has nothing to lose by running other than one last stab before probably retiring from public life.

So, in the end, the fledgling 2016 Democratic field (Biden/Brown/Gore) that was mostly a throwback to the 1990s has died a quick death.

With Biden, it’s a wait and see, although I wouldn’t be surprised if he just decides to bow out. With Warren, despite her firm statements to the contrary, we shouldn’t be surprised if she does toss her hat in the ring. This is her only window of opportunity. She will probably be considered too old after the ’16 cycle.

At the same time, she pales in comparison to Barack Obama when gauging the two as insurgent candidates:

Think back to this time in 2007. Mr. Obama already had emerged as a strong candidate. He had announced his candidacy in February 2007, and surged to about 25 percent in the polls. His early rallies drew large crowds. By April, he was already tied with Mrs. Clinton in Iowa (although John Edwards led them both), and he matched her first-quarter fund-raising tallies.

The numbers, if anything, underestimated his position. His political identity, intentionally or not, was forged from anti-Clinton kryptonite. Early opposition to the war in Iraq positioned him to challenge Mrs. Clinton on her biggest liability. His youth, unifying message and relentless criticism of special interests contrasted perfectly with Mrs. Clinton, who was seen as a polarizing, transactional candidate tied to the past.

The enthusiasm for Ms. Warren’s candidacy on the left is real, but it probably doesn’t compare with the support for Mr. Obama. She isn’t as sharp a contrast with Mrs. Clinton, particularly when it comes to youth. Ms. Warren may be a new face, but, at 65, she doesn’t represent generational change against Mrs. Clinton, who is 67.

And Mr. Obama had an advantage that Ms. Warren can’t replicate: the possibility of becoming the country’s first black president. Ms. Warren’s similar appeal as a possible pathbreaking president, as the first woman to win, would be matched by Mrs. Clinton.

Again, Clinton/Warren 2016 could help Hillary shore up the progressive elements skeptical of her on policy. Myra Adams wrote in National Review that it also has the added bonus of removing Warren from the Senate should this highly hypothetical ticket win in 2016. As a result, progressive obstructionism by Warren to Clinton's pragmatic, sometimes secretive, approach to policy can be avoided. What say you?

**Crossposted over at Hot Air**