It’s No Big Deal, But Top Hillary Advisers Knew Right Away That Benghazi Was A Terrorist Attack 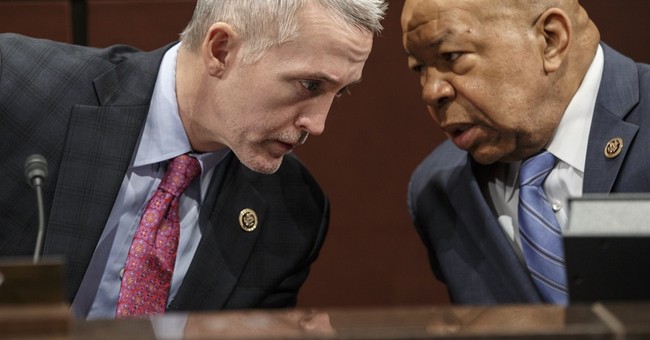 The Select Committee on Benghazi was established and recently extended last month. The five Democrats on the committee were irked that the vote on reauthorization in early January pretty much gave the body an unlimited amount of time and money to investigate the circumstances of the death of Ambassador Chris Stevens and three other Americans, who were killed in a terrorist attack in Benghazi, Libya on September 11, 2012 (via NYT):

The move to reauthorize the politically charged panel was included in a rules package for the new Congress that passed 234 to 172, mostly along party lines.

Five Democrats on the select committee lamented the reauthorization, which set no limit on the committee's budget or time frame, which means it could last well into the presidential election year. Hillary Rodham Clinton, a possible Democratic presidential candidate, could be called to testify about the attack, which occurred while she was secretary of state.

A report by the House Intelligence Committee found that the CIA and the military acted properly in responding to the 2012 attack. Debunking a series of persistent allegations hinting at dark conspiracies, the panel determined that there was no intelligence failure, no delay in sending a CIA rescue team, no missed opportunity for a military rescue and no evidence the CIA was covertly shipping arms from Libya to Syria.

The panel will probably be reviewing the latest FOIA request from Judicial Watch that revealed top Clinton advisers immediately that Benghazi was a terrorist attack: [bold text represents email exchanges]

On September 11, 2012, at 4:07 PM, Maria Sand (who was then a Special Assistant to Mrs. Clinton) forwarded an email from the State Department’s Operations Center entitled “U.S. Diplomatic Mission in Benghazi is Under Attack (SBU) [Sensitive But Unclassified]” to Cheryl Mills (then-Chief of Staff), Jacob Sullivan (then-Deputy Chief of Staff for Policy), Joseph McManus (then-Hillary Clinton’s Executive Assistant), and a list of other Special Assistants in the Secretary’s office:

The Regional Security Officer reports the diplomatic mission is under attack. Tripoli reports approximately 20 armed people fired shots; explosions have been heard as well. Ambassador Stevens, who is currently in Benghazi, and four COM [Chief of Mission] personnel are in the compound safe haven. The 17th of February militia is providing security support.

On September 11, 2012, 4:38 PM, State Department Foreign Service Officer Lawrence Randolph forwarded Mills, Sullivan and McManus an email from Scott Bultrowicz, who was the former director of the Diplomatic Security Service (ousted following review of the attack), with the subject line, “Attack on Benghazi 09112012”:

DSCC received a phone call from [REDACTED] in Benghazi, Libya initially stating that 15 armed individuals were attacking the compound and trying to gain entrance. The Ambassador is present in Benghazi and currently is barricaded within the compound. There are no injuries at this time and it is unknown what the intent of the attackers is. At approximately 1600 DSCC received word from Benghazi that individuals had entered the compound. At 1614 RSO advised the Libyans had set fire to various buildings in the area, possibly the building that houses the Ambassador [REDACTED] is responding and taking fire.

Nearly seven hours later, at 12:04 am, on September 12, Randolph sends an email with the subject line “FW: Update 3: Benghazi Shelter Location Also Under Attack” to Mills, Sullivan, and McManus that has several updates about the Benghazi attack:

I just called Ops and they said the DS command center is reporting that the compound is under attack again. I am about to reach out to the DS Command Center.

This email also contains a chain of other, earlier email updates:

September 11, 2012 11:57 PM email: “(SBU) DS Command reports the current shelter location for COM personnel in Benghazi is under mortar fire. There are reports of injuries to COM staff.”

September 11, 2012, 4:54 PM: “Embassy Tripoli reports the firing at the U.S. Diplomatic Mission in Benghazi has stopped and the compound has been cleared. A response team is on site to locate COM personnel.”

Embassy Tripoli confirms the death of Ambassador John C. (Chris) Stevens in Benghazi. His body has been recovered and is at the airport in Benghazi.

Two hours later, Joseph McManus forwards the news about Ambassador Stevens’ death to officials in the State Department Legislative Affairs office with instructions not to “forward to anyone at this point.”

Despite her three top staff members being informed that a terrorist group had claimed credit for the attack, Secretary of State Hillary Clinton, issued an official statement, also produced to Judicial Watch, claiming the assault may have been in “a response to inflammatory material posted on the Internet.”

Cheryl Mills asks that the State Department stop answering press inquiries at 12:11 am on September 12, despite the ongoing questions about “Chris’ whereabouts.” In an email to State Department spokesman Victoria Nuland, Jacob Kennedy, and Phillipe Reines (then-Deputy Assistant Secretary of State for Strategic Communications and Senior Communications Advisor), Mills writes:

Can we stop answering emails for the night Toria b/c now the first one [Hillary Clinton’s “inflammatory material posted on the Internet” statement] is hanging out there.

Earlier in the chain of emails, Nuland told Mills, Sullivan, and Patrick Kennedy (Under Secretary of State for Management) that she “ignored” a question about Ambassador Steven’s status and whereabouts from a CBS News Reporter.

In 2013, eyebrows were raised when it was discovered that the Obama administration scrubbed some information from the talking points, revising them twelve times. Susan Rice, then-Ambassador to the UN, delivered the final set when she did the Sunday morning talk shows, which omitted references to the al-Qaeda affiliated Ansar al-Sharia and CIA warnings about terrorist activity in the area in the months before the assault (via ABC News) [bold text indicates writings of then-State Dept. Spokesperson Victoria Nuland]:

ABC News has obtained 12 different versions of the talking points that show they were extensively edited as they evolved from the drafts first written entirely by the CIA to the final version distributed to Congress and to U.S. Ambassador to the U.N. Susan Rice before she appeared on five talk shows the Sunday after that attack.

White House emails reviewed by ABC News suggest the edits were made with extensive input from the State Department. The edits included requests from the State Department that references to the Al Qaeda-affiliated group Ansar al-Sharia be deleted as well references to CIA warnings about terrorist threats in Benghazi in the months preceding the attack.

That would appear to directly contradict what White House Press Secretary Jay Carney said about the talking points in November.

“Those talking points originated from the intelligence community. They reflect the IC’s best assessments of what they thought had happened,” Carney told reporters at the White House press briefing on November 28, 2012. “The White House and the State Department have made clear that the single adjustment that was made to those talking points by either of those two institutions were changing the word ‘consulate’ to ‘diplomatic facility’ because ‘consulate’ was inaccurate.”

Summaries of White House and State Department emails — some of which were first published by Stephen Hayes of the Weekly Standard — show that the State Department had extensive input into the editing of the talking points.

State Department spokesman Victoria Nuland raised specific objections to this paragraph drafted by the CIA in its earlier versions of the talking points:

“The Agency has produced numerous pieces on the threat of extremists linked to al-Qa’ida in Benghazi and eastern Libya. These noted that, since April, there have been at least five other attacks against foreign interests in Benghazi by unidentified assailants, including the June attack against the British Ambassador’s convoy. We cannot rule out the individuals has previously surveilled the U.S. facilities, also contributing to the efficacy of the attacks.”

In an email to officials at the White House and the intelligence agencies, State Department spokesman Victoria Nuland took issue with including that information because it “could be abused by members [of Congress] to beat up the State Department for not paying attention to warnings, so why would we want to feed that either? Concerned …”

The paragraph was entirely deleted.

Like the final version used by Ambassador Rice on the Sunday shows, the CIA’s first drafts said the attack appeared to have been “spontaneously inspired by the protests at the U.S. Embassy in Cairo” but the CIA version went on to say, “That being said, we do know that Islamic extremists with ties to al-Qa’ida participated in the attack.” The draft went on to specifically name the al Qaeda-affiliated group named Ansar al-Sharia.

The latest foray of this administration tripping over itself badly was when they tried to explain how Obama’s remarks about parts of the horrific Paris shootings being "random," specifically the attack on the Kosher deli, last January wasn't a big deal.