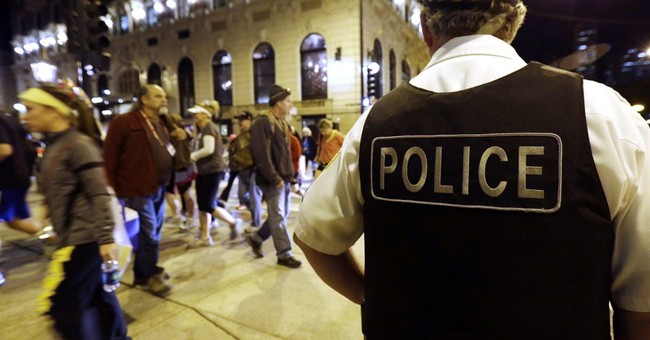 It sounds like a story you would hear from a former Soviet state. The Chicago Police Department has reportedly been holding suspects at an off-the-grid location called Homan Square. Here, Americans, some as young as 15, have been denied counsel, held anywhere from 12-24 hours, and subject to beatings, according to the Guardian.

For those sent to Horman, they aren’t booked. Their records aren’t even entered in the public databases. This location is said to have been operational for years, since the late 1990s. One person is said to have died in one of Horman’s “interview rooms.” The article also discussed the arrest of Brian Jacob Church, who was arrested by Chicago police in 2012 on terrorism charges. Church is part of the “NATO Three,” who were arrested after police infiltrated their protest of the organization’s Chicago summit. The Guardian reported that Church was subject to an interrogation without being read his Miranda rights and detained for about 17 hours:

The facility, a nondescript warehouse on Chicago’s west side known as Homan Square, has long been the scene of secretive work by special police units. Interviews with local attorneys and one protester who spent the better part of a day shackled in Homan Square describe operations that deny access to basic constitutional rights.

Alleged police practices at Homan Square, according to those familiar with the facility who spoke out to the Guardian after its investigation into Chicago police abuse, include:

At least one man was found unresponsive in a Homan Square “interview room” and later pronounced dead.

Brian Jacob Church, a protester known as one of the “Nato Three”, was held and questioned at Homan Square in 2012 following a police raid. Officers restrained Church for the better part of a day, denying him access to an attorney, before sending him to a nearby police station to be booked and charged.

Unlike a precinct, no one taken to Homan Square is said to be booked. Witnesses, suspects or other Chicagoans who end up inside do not appear to have a public, searchable record entered into a database indicating where they are, as happens when someone is booked at a precinct. Lawyers and relatives insist there is no way of finding their whereabouts. Those lawyers who have attempted to gain access to Homan Square are most often turned away, even as their clients remain in custody inside.

A former Chicago police superintendent and a more recently retired detective, both of whom have been inside Homan Square in the last few years in a post-police capacity, said the police department did not operate out of the warehouse until the late 1990s.

Jacob Church learned about Homan Square the hard way. On May 16 2012, he and 11 others were taken there after police infiltrated their protest against the Nato summit. Church says officers cuffed him to a bench for an estimated 17 hours, intermittently interrogating him without reading his Miranda rights to remain silent. It would take another three hours – and an unusual lawyer visit through a wire cage – before he was finally charged with terrorism-related offenses at the nearby 11th district station, where he was made to sign papers, fingerprinted and photographed.

In preparation for the Nato protest, Church, who is from Florida, had written a phone number for the National Lawyers Guild on his arm as a precautionary measure. Once taken to Homan Square, Church asked explicitly to call his lawyers, and said he was denied.

“Essentially, I wasn’t allowed to make any contact with anybody,” Church told the Guardian, in contradiction of a police guidance on permitting phone calls and legal counsel to arrestees.

Church’s left wrist was cuffed to a bar behind a bench in windowless cinderblock cell, with his ankles cuffed together. He remained in those restraints for about 17 hours.

After serving two and a half years in prison, Church is currently on parole after he and his co-defendants were found not guilty in 2014 of terrorism-related offenses but guilty of lesser charges of possessing an incendiary device and the misdemeanor of “mob action”.

The access that Nato Three attorneys received to Homan Square was an exception to the rule, even if Jacob Church’s experience there was not.

Some were not so lucky. On February 2, 2013, John Hubbard was taken to Homan Square, where he died due to heroin intoxication in one of the interrogation rooms.

Regardless of the crimes, in this country, even the worst of humanity deserves a fair trial, access to counsel, and other rights associated with the due process of law. Of course, we’re all for law and order and fighting terrorism, but having what appears to be a black site on American soil poses a serious constitutional question, especially when this facility allegedly neglects to book their suspects and add their information into the database. We should be wary of institutions that engage in practices that prevent accountability under the law. To safeguard the Constitution, even the lowest of the low need their day in court–at the very minimum.