Can This Tough Nerd Survive? 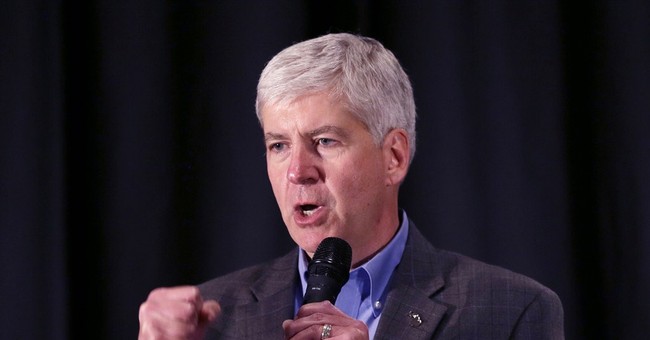 Tomorrow, Michigan voters head to the polls to cast their votes to decide whether to replace incumbent Republican Gov. Rick Snyder with former Democratic Congressman Mark Schauer, or give him another four years in office. Right now, the race is too close to call.

“Too close to call” will probably be the theme of the entire 2014 election cycle.

While most polls since September have shown Snyder in the lead, the polls have been tightening as Election Day approaches. And for the polls that had Snyder in the lead, it was a battle of extremes; some had him ahead by a wide margin, while others had his lead fall within the margin of error. There was no pattern.

After Snyder and Schauer’s only town hall-style debate, the race tightened up. Now, both sides are on the campaign trail in a last-ditch effort to energize their bases before heading to the polls tomorrow morning.

The left-leaning Public Policy Polling has Snyder leading by 1 point, 46/45, out of a sample of 914 likely voters. The poll also wasn’t terribly skewed either; it was D+3.

An EPIC-MRA poll, which previously had Snyder with a eight-point lead earlier in October, has him now leading by only two points over Schauer, 45/43, thanks to Democratic absentee ballot efforts.

Schauer has been hitting the trail hard. He plans to visit every corner of the state before Election Day, with special attention to the Grand Rapids area that was a dearth of Democratic Party support in 2010. His main goal has been to drive up turnout since many Democrats in the Great Lakes State don’t vote in off-year elections. But, to put this into perspective, about 30,000 straight-party votes for Democrats were cast in the two previous presidential elections, according to MLive, while Republican turnout was lower in both 2008 and 2012. Schauer sees an avenue for victory here.

Voter turnout is expected to be higher this year.

Schauer has also been to rallies in Canton, Madison Heights, Benton Harbor, and Detroit, where President Obama decided to stump for him and Rep. Gary Peters who is running for the U.S. Senate.

Nevertheless, Snyder is working to get his voters out–and touting his endorsements as well. The Detroit Free Press endorsed him as the better choice to lead Michigan. He recently joined Michigan Republicans for their 17-stop “Comeback State Bus Tour,” joined GOP senate hopeful Terri Lynn-Land in Holland, Michigan, and made a quick pit stop in Midland.

As both sides sprint to the finish line, Snyder was able to sit down and have some coffee with former Michigan Gov. William Milliken, who endorsed him in his re-election bid.

The Snyder camp has been touting the state’s economic recover, including the creation of 300,000 private sector jobs. Schauer has hit back saying that Snyder supports outsourcing Michigan jobs and only the wealthy have benefitted from the economic recovery.

He also proposed charter school reforms, and hopes the $50 million going to community colleges to update their skilled trades education will yield enormous dividends in the form of a deluge of jobs for Michigan residents. Snyder has said that the creation of skilled trades jobs are a priority if he’s elected to a second term.

Schuaer’s plan got a ripped by Republican strategist Greg McNeilly, who wrote in the Detroit News on October 30 that the former congressman’s plan is too expensive and typical of liberal tax-and-spend policies:

Schauer released his so-called “Blueprint for Michigan” this summer, outlining his priorities including billions in new government spending. While the media robustly criticized the document for lacking specifics, fiscal analysts began digging through it to find out what it might cost taxpayers.

A former House Fiscal Agency director pegged the new costs in Schauer’s plan at $2.2 billion per year. The Mackinac Center for Public Policy, a free market think tank based in Midland, puts the price tag at between $2.4 billion and $3.7 billion annually.

Assuming a slightly more conservative estimate is accurate, the math on that new spending comes out to a new $1,000 per year tax, per family, across the state of Michigan.

That’s an additional $1,000 on top of the thousands Michiganians already send Lansing each year.

That shouldn’t come as a surprise. Schauer is no stranger to out-of-control spending, or to paying for that spending with massive new tax hikes.

When Schauer served as one of Gov. Jennifer Granholm’s top lieutenants in the legislature, he voted to raise taxes.

It was roughly this time only a few years ago that Schauer helped shut down state government in order to engineer a $765 million income tax hike on Michigan families and $750 million in new taxes on services like oil changes, haircuts and movie tickets.

It’s particularly relevant and worth noting that the $1.5 billion in new taxes Schauer steered through the Legislature to end the government shutdown were all levied on Michigan families. Not on small businesses. Not on big corporations. Not on outsourcers. On families.

OK, he’s a Republican. He doesn’t like Schauer’s policies, but one thing Republicans might help a possible Schauer administration on is killing the retirement tax on Michigan pension holders.

The governor went into more detail on the dynamics of the pension tax in the debate, which he said created a fairer system. Schauer decried it as bad tax policy.

Education, as I’ve mentioned in a previous post, can go either way to fit the narrative of the Snyder and Schauer campaigns. Yes, cuts were made to education, but it didn’t come near the $1 billion mark that Schauer’s camp–and other groups–have said on the campaign trail. At the same time, Snyder has increased education funding, but it’s unclear if those raises have made it into the classroom.

As for infrastructure, which is probably the only issue where both sides agree; Snyder and Schauer noted that Michigan’s roads needed to be fixed. Now, it’s up for Michigan residents to decide. This is why we have elections. Are they happy with Snyder’s recovery, or do they think things will go better with Schauer at the helm. We’ll know soon enough, but it’s probably going to be a long night.