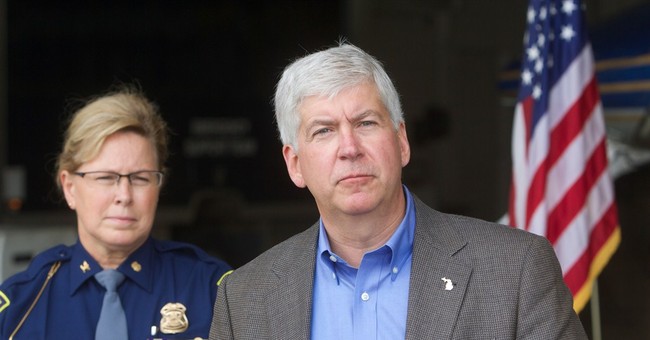 After weeks of posturing, Gov. Rick Snyder and Democratic challenger Mark Schauer have agreed to face-off Oct. 12 before a live televised audience of undecided voters at Wayne State University in Detroit.

Snyder's and Schauer's campaigns announced Monday evening their candidates will answer questions in a gubernatorial town hall forum co-sponsored by The Detroit News, Detroit Free Press and Detroit Public Television, which will broadcast the event on Channel 56.

"We're pleased the two campaigns have agreed to face one another on a public stage to address the issues critical to Michigan voters," said Jonathan Wolman, editor and publisher of The Detroit News. "The interest of voters are better served when they can compare the candidates side by side, for themselves, rather than be at the mercy of the endless barrage of campaign advertising."

The hour-long Sunday evening event will begin at 6 p.m.

Both candidates agreed to a free-flowing format without opening or closing statements. Audience members will be undecided voters chosen by polling firms that work for The News and Free Press.

While there will be no formal time limits, each candidate will be given 30 seconds to respond to direct statements, accusations or personal criticisms made by their opponent.

In the meantime, the Republican Governors Association has hit Schauer over Obamacare and his voting record in Congress, where he sided with Obama 95 percent of the time.

Yet, the one issue that will come up is education. Recently, both sides traded jabs over whether the program was cut or had an increase in funding. Schauer contends that Gov. Snyder cut the program by $1 billion. Snyder says his 2015 FY budget increase K-12 education by 3 percent.

Overall, it depends on how you see the math. It’s true that there were education cuts, but it was nowhere near $1 billion–and while funding may have increased slightly; there’s little evidence to support that it went back into the classroom (via MLive):

Snyder's 2012 budget -- his first in office -- cut $930.6 million in ongoing school aid spending compared to the previous year, according to an SFA analysis from the time. In doing so, it reduced the minimum foundation allowance by $470 per pupil, retaining an existing $170 per-pupil cut that had been backfilled by federal money and adding another $300 per-pupil cut.

That's money that goes directly to schools -- and eventually the classroom.

Budgets are plans and do not always reflect what actually happened. All told, the state ended up spending $12.75 billion in school aid for fiscal year 2012, according to the SFA. That was down from $12.98 billion the year before under a budget approved before Snyder took office, a net drop of around $235 million, far short of the $1 billion figure that critics cite.

RICK SNYDER: "I'm proud to say, in the last three years we've increased educational spending at the state level for K-12 each and every year to the point where we've invested $660 more per student than there was previously before I took office."

Gross school aid appropriations fell Snyder's first year in office but have rebounded each of the last two years. As noted above, that first-year reduction was marked by a significant loss of federal dollars. State restricted and general fund appropriations increased slightly in 2012. They continued to climb in Snyder's next two budgets and they are poised to jump again.

State-specific school aid spending rose from $10.8 billion in 2011 to $11.5 billion in 2014, according to the SFA. That means overall state aid is up around 6.4 percent since Snyder took office. But when you factor in federal funding, gross appropriations increased less than 3 percent, which is slower than the rate of inflation.

Snyder's $660 per-pupil figure is based on factors that do not necessarily mean more money in the classroom, including debt service for the school bond loan fund, state spending on the Michigan Public School Employee Retirement System and reduced enrollment numbers.

Bottom line: State school aid spending is up since Snyder took office, whether or not you count federal funds or retirement payments, but the $660 per-pupil figure doesn't tell the whole story. A large chunk of state spending now is going to retirement costs and doesn't necessarily make it into the classroom. The minimum per-pupil funding allowance is down since Snyder took office, and many schools have fewer students.

As both sides prepare for the debate, Gov. Mitt Romney will head into the Mitten State to stump for what appears to be the entire Republican ticket in Michigan. Besides Gov. Snyder, U.S. Senate candidate Terri Lynn Land, Lt. Gov. Brian Calley, Attorney General Bill Schuette and Secretary of State Ruth Johnson will all appear at the “ComMITT to the Comeback Rally” on October 2 in Livonia.