MI GOV: Most Polls Show Snyder In The Lead 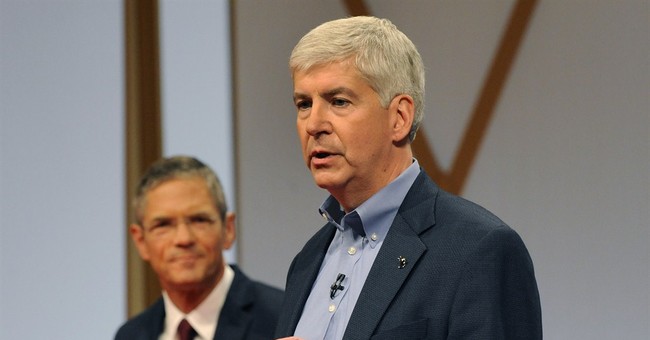 On October 12, Michigan Republican Governor Rick Snyder and his Democratic challenger Mark Schauer held their first and only town hall-style debate. Let’s just say that at some points in the debate things got testy between the two candidates, with Gov. Snyder ignoring the parameters of the debate by going over his time limit to get his point across to voters.

On education, Schauer hit Snyder for cutting funding by $1 billion, which is a contentious claim at best. Snyder stressed innovation in his rebuttal. When taxes were brought up, Gov. Snyder said that the state was in a $1.5 billion deficit, it went through a lost decade of economic growth, and he got rid of the Michigan Business Tax because it was killing jobs. He changed the tax laws to make them fair.

As for Schauer’s claims that only the wealthy and big businesses are prospering, Snyder simply said that those big companies are paying the same rate under his alternate corporate tax; he just got rid of the tax credits and incentives from the previous tax law.

As for the topic of the pension tax, Schauer said that not only is it wrong, but also “it’s bad tax policy.” Again, he reiterated the cuts to education and how the pension tax impacts working families and has caused seniors to leave the state. When asked by the moderating panel how he would make up the difference by repealing the tax, Schauer said he would cut wasteful programs and “sweetheart” contracts the governor created, like the $41 million deal to his cousin’s furniture distributorship.

That didn’t sit too well with Snyder.

He said Schauer’s description is a mischaracterization; he created a system that’s fairer. He went through some history at this point.

If you had a public pension, you paid no Michigan income tax, regardless of age or the size of the pension. Snyder also said if you had a “defined benefit plan” through a private employer, you were still excluded from taxes, but up to a certain limit.

Workers at companies with a 401k plan saw that parts of it were taxable, while some of it wasn’t. Those without a retirement plan who still had to work; they had to pay income taxes. Snyder said that wasn’t fair.

We realized we had a big benefit for a large portion of Michigan residents, so they grandfathered in seniors (67 or older). There was a special provision for those 60 years or older – to exclude up to $40,000 for a married couple, and there was a new senior exclusion.

Also, Snyder said that his cousin’s contract is not new; it’s been around for over 20 years. The last time it was renewed was before he became governor.

Both candidates agreed that something needed to be done about roads. Both candidates support raising the minimum wage; Snyder touted how he raised it in a bipartisan manner.

When asked how he would govern, given that Michigan could have a Democratic governor and a Republican legislature, Schauer noted that he was in the legislature for 12 years, 10 of them in the minority. Snyder claimed that over 75% of the bills he’s signed into law have been bipartisan.

On the campaign trail, Schauer visited Western Michigan University last week to drum up support among the student body. Yet, a big boost could come from former President Bill Clinton’s recent visit to Flint where he said, “We have to plan for the future. You will do better with Gary Peters. You will do better with Mark Schauer." Hillary also flew in to lend a hand to Schauer and Democratic Senate candidate Rep. Gary Peters earlier this month as well. The Clinton factor is something to be on the lookout for this cycle, especially as Democrats utilize the power couple for a last ditch effort to hold onto their majority in the Senate.

In early October, First Lady Michelle Obama stumped for Schauer, but her presence could backfire by reminding folks that the president's policies are on the ballot

Gov. Snyder has been pushing Michigan women to become more entrepreneurial saying, “Michigan’s economic comeback must include female entrepreneurs, college women in high-tech fields, and high school girls who crack gender barriers by engaging in programs such as competitive robotics.”

Earlier this month, Snyder stopped in Haslett to hold a town hall event where he laid out his plans to improve education in the state. Former Gov. Jeb Bush and Kid Rock also have flown in to lend their support for Snyder’s campaign.

Right now, the Michigan GOP is planning a bus tour to help the Republican ticket, which begins in Lansing on Nov. 1.

As for the polls, it’s hard to find a real pattern. It’s a rather anarchic trend, with wide fluctuations, but most polls have Snyder with a slim to comfortable lead over Schauer.

The latest EPIC-MRA poll for the Detroit Free Press had Snyder with a huge 8-point lead over Schauer:

47% would vote for Snyder and 39% would vote for Schauer, the poll found. In late September, Snyder led Schauer by six points, 45%-39%, according to EPIC-MRA of Lansing. Another 11% were undecided or refused to say, and about 3% said they were supporting third-party candidates.

The poll of 600 likely voters, which was conducted Friday through Sunday and has a margin of error of plus or minus 4 percentage points, also shows Republican Attorney General Bill Schuette with a 10-point lead over Democratic challenger Mark Totten, and Republican Secretary of State Ruth Johnson with a nine-point lead over Democrat Godfrey Dillard.

Significantly, the poll shows Snyder with a 22-point lead among Independent voters, up from 5 points a month ago. Snyder also has overcome the lead Schauer held among female voters over the last two months and now leads among women, 42%-39%. As recently as August, Schauer led among women, 52%-37%.

Also, the undecideds are a pivotal bloc of voters in this election–and they’re breaking for Snyder.

Yet, a new NYT/CBS News/ YouGov poll has Schauer up 1 point over Snyder. Again, it’s a mess–and there’s a lot of volatility. But the cumulative effect favors Snyder. Out of the 20 polls conducted since September, only 3 have Schauer in the leading by 1-2 points. Another poll had the race tied. The rest had Snyder in the lead by 1-8 points.

To counter the Times, Detroit News-WDIV released their poll yesterday showing Snyder with a 6-point lead over Schauer amongst 600 Michigan voters who plan to vote next Tuesday.  When asked who has a clearer plan to Michigan's future, Snyder leads 41/33 over Schauer.