PPP: Hagan Up 3 Over Tillis, Race Still A Toss-Up 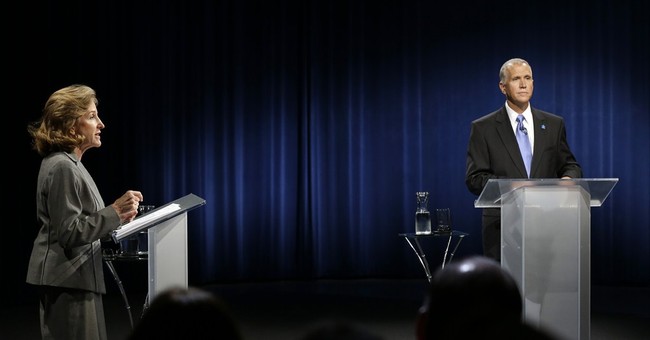 A new PPP poll has Democratic Sen. Kay Hagan up 3 points over her Republican challenger Thom Tillis. Wait; didn’t Tillis say that Hagan is going to lose on Nov. 4? Did they not smell “victory in the air?”

Everyone, relax. As Tillis told Townhall, single digits in North Carolina decide races–and his campaign officials said that the Tar Heel state has a history of races breaking late. On Teusday night, there was another Senate debate, with one notable exception: Kay Hagan was absent. So, with two weeks out from Election Day, Thom Tillis had a solid hour to make a final argument with North Carolina voters in a race that’s virtually tied; reasons that MSNBC’s Rachel Maddow mentioned in her rant against Hagan for skipping the debate.

My colleague Guy Benson had this zinger last night.

Given Hagan's attendance record at key hearings and briefings, it's fitting that she skipped tonight's debate. #NCSen

So, how does the poll breakdown? First, it’s a D+7 poll. Second, it’s not shocking where the bases of support for Hagan and Tillis comes from in this race [emphasis mine]:

Hagan is up 49/37 with women, 85/4 with African Americans, and 61/27 with young voters. Meanwhile Tillis is up 49/42 with men, 55/34 with white voters, and 54/37 with seniors. Tillis is ahead 43/38 with independents but in an unusual finding for North Carolina politics, Hagan is getting the same share of the Democratic vote (81%) that Tillis getting of the Republican vote and if you do that as a Democrat in North Carolina you're generally going to win given the party's voter registration advantage in the state.

There’s also a question of how strong the evangelical vote will turn out this year. They’re one-third of North Carolina’s electorate, but this bloc of voters is difficult to poll. Yet, there are other positive indicators.

Education has been the Achilles heel of the Tillis campaign; a point even his own staff has admitted in private, but they are hoping this line of attack from Hagan and national Democrats has hit a ceiling with voters, according to the Washington Examiner.

As reported here at Townhall, foreign affairs has played a crucial role is shifting the debate away from Hagan’s “sins of Raleigh” strategy, even admitting to skipping an Armed Services hearing to attend a fundraiser last February. There are also questions relating to allegations that her family profited from stimulus cash injections they received for their business; questions that would have inevitably come up if she had attended last night’s debate.

But let’s not forget the Obama factor. Despite red state Democrats trying to run away from him, Obama keeps spoiling that narrative by saying his policies are on the ballot this November–and that they all support his agenda.

Tillis’ campaign manager, Jordan Shaw, sent out this memo as to why Hagan would skip the debate last night:

• On Friday, Sen. Hagan flip-flopped on implementing a travel ban from Ebola-inflicted countries. While Thom was one of the first Senate candidates in the nation to call for a travel ban, Sen. Hagan equivocated on the issue for weeks, even criticizing the idea of a ban at times, all while praising President Obama and the CDC for their “great guidance” in addressing Ebola.

• At the October 7th debate hosted by the N.C. Association of Broadcasters, Hagan couldn’t name a single instance where she regretted supporting President Obama’s policies, which she has done 96 percent of the time. Following the debate, Hagan admitted that she skipped a classified Armed Services Committee hearing on ISIS to attend a cocktail fundraiser in New York City, but has thus far refused to tell journalists why she chose to do so.

• At the October 9th debate hosted by WECT, Hagan struggled to answer questions about her family’s $390,000 stimulus payday, insisting that she consulted a lawyer who deemed taking the taxpayer money was “appropriate” even though Hagan was directly benefitting from legislation she voted for

As Tillis told Townhall, he knew he wouldn’t be leading in the polls during the summer, but he’s seeing a shift in direction towards him with undecided voters who may decide this election. Right now, Hagan and Tillis are garnering equal shares of the Democratic and Republican vote in North Carolina, which means this race will come down to turnout and it could be incredibly close.

Right now, both sides have eyes on early voting–and it’s not looking good for Democrats (via WaPo):

Compared to overall voter registration, Iowa and North Carolina Democrats are doing much worse than earlier in the month, and Republicans in those states much better.

How to read this: A red or blue dot above the diagonal line shows that the Republican (or, for a blue dot, Democratic) vote in the state comprises a larger percentage of the early vote than the total voter pool. A dot below the line indicates that the early vote is under-performing for that demographic. The further above or below the line the dot falls, the better or worse the group is faring. The change since the last time we did this is indicated with a line connected to the small dot at the previous percentage.

Interestingly, unaffiliated/undeclared voters are uniformly underperforming their registration numbers, perhaps in part because campaigns aren't targeting them as aggressively in the early vote process. But that puts the poor performance of Democratic campaigns in sharper relief. If unaffiliated voters are underperforming as a percentage of all of the votes that are in, one would expect the two parties to be overperforming.

But Democrats aren't. The bad news for them is clear: the extent to which the red dots are above the line and the blue dots are below it. In what we expect to be a relatively low-turnout election, Democrats would want (and really need) to leverage their generally superior turnout mechanisms to bank votes early. So far, they're getting beaten at that effort.

The bad news for Republicans is that — as we mentioned two weeks ago — these numbers can and will change quickly.

In all, Republican voters are turning out at higher rates–and that's not good news for Kay Hagan.

Editors note: Upon reviewing the North Carolina Board Of Elections website, in-person early voting began today.  We tried contacting the the board of elections multiple times, but high caller volume prevented us from getting a clarification on the early voting numbers from the Washington Post piece.  It's probably a calculation of the absentee ballots, but we will keep you updated on this matter.