Tillis: ‘Sen. Hagan Is Going To Lose On November 4th’ 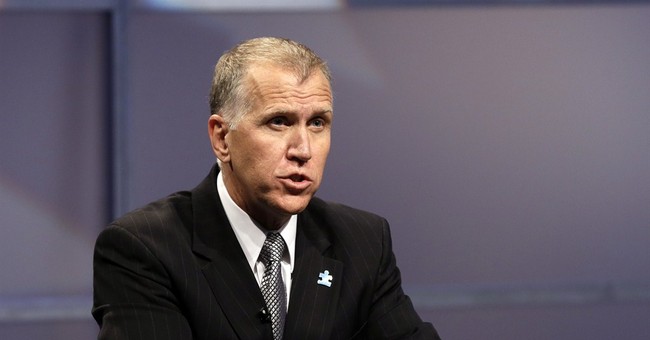 Before North Carolina State House Speaker Thom Tillis embarked on a road trip to thank and address supporters and volunteers at the various victory centers across the state, I was able to have a brief interview with the GOP Senate hopeful who has Democratic Sen. Kay Hagan fighting for her political life.

The first concern some have in this race–and others across the country–is the gender gap. Tillis is trailing women voters by double-digits–and faring worse with single women. Yet, Tillis didn’t seem worried about it, telling Townhall how he felt:

“Good about our position in areas across the board. If you go out to rural North Carolina, you go out into areas of the state we feel like we have the foundation to win–that we have enough to win. In North Carolina, races are typically decided by single digit margins so you are always going to be fighting for a few percentage points on one side or the other; President Obama did; Governor Romney did. So, it’s more of a matter of being disciplined and getting our message out–and withstanding the tens of millions of dollars that Sen. Hagan and Harry Reid have dumped into this state."

In the polls, Tillis was trailing Hagan by a slim 4 points, but seems to have erased that lead. Recent surveys from the New York Times, USA Today, and High Point University have this race tied or with Hagan leading by 1 point.

With ISIS and national security issues becoming more prominent on the campaign trail, did this shift contribute to Tillis catching up with Hagan? Is this the return of the “security moms?” While it seems that way, especially with Hagan admitting to skipping an Armed Services hearing to fundraise last February, the rise of ISIS, and the Obama administration’s noticeable torpor in reacting to the Ebola crisis; Tillis was confident that the polls began to show movement in his direction regardless of the help he’s received on the national security front. For most of the summer, he was unable to campaign as aggressively due to the state legislature being in session.

"I think if you take a look at the polls from the perspective of dropping off some of the lagging indicators of the mid-summer when they had a 3 or 4 to 1 advantage in spending, and you start looking at polls that started after the legislative session ended; virtually every poll showed movement in our direction. The polls this past week had us dead even in one poll, slightly ahead in another poll, and these were polls that had us down before so they were not some sort of upstart; they were people who had been in the mix before. So, I think what you’re seeing is just–as you get closer to the election; as people become more focused on the issues; we’re seeing the undecided voters and the voters most likely to vote siding with us. And we just have to continue to get that message out."

In Virginia, one criticism I heard from conservatives was that Republican gubernatorial candidate Ken Cuccinelli should have resigned his office as attorney general to concentrate solely on beating Democrat–and now governor–Terry McAuliffe. So, would Speaker Tillis be leading in the polls if he has resigned as State House Speaker? He told Townhall he disagreed with that narrative.

"I don’t think so. I had a two-year commitment that I made; I think that a lot of the legislative initiatives required strong leadership to get them done. I think some of the things that we were working on in this session, particularly around job creation and improving our economy may have not gone to the level that they did under my leadership. And quite honestly, it was my primary job. This is a future job–and I feel very strongly that I needed to live up to my obligations; so I don’t think so."

"I think it would have been a different set of issues, but I think we would have been there; we never expected because of the money advantage–with labor unions and Harry Reid and liberal interests that was going to be there whether or not I was in session. We never really expected in the summer to be ahead. What should be troubling to Sen. Hagan is to have spent tens of millions of dollars and never to be able to get over 44 percent. She’s a sitting senator; generally speaking if you can get to 50 percent as a sitting senator either because of your results or because of the money to try and prop up your results; it’s a problem. That’s why Sen. Hagan is going to lose on November 4th."

Mr. Tillis was running late to his next event, but my other question would have been the role of his humble upbringing in this race. Voters like candidates who are authentic; people who have experienced socioeconomic struggles and have triumphed over it.

It’s also part of this nameless, faceless neo-populist wave that’s emerging across the country. Thom Tillis fits that mold. After contacting Tillis’ press secretary, Meghan Burris, she provided Townhall with a statement from the GOP hopeful:

"I was born into a working class family with five brothers and sisters. We knew from the very beginning that success in life would be achieved through hard work and dedication. I didn't have the luxury of going to college after high school, and instead worked my way up the corporate ladder from a minimum wage job in a warehouse to a partner at IBM. I struggled to make ends meet as I raised a family and finally earned my degree at the age of 36. I was fortunate enough to realize my American Dream - and that's why I'm running for the U.S. Senate. I will go to work on day one to help provide opportunities for Americans to be able to realize and achieve their own dreams and make our nation great again."