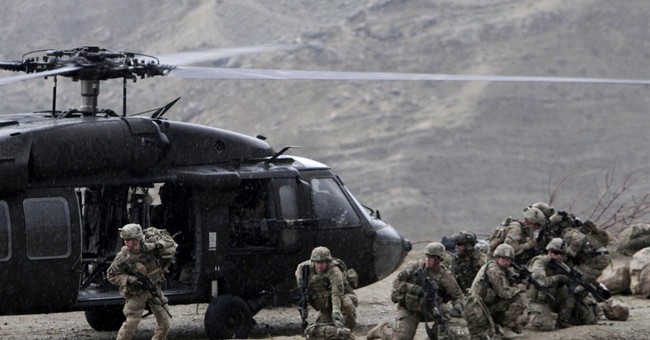 As the Yazidi religious minority anguishes in the mountains of northern Iraq, plans for a rescue mission were being mulled by the Obama administration, according to the Wall Street Journal:

Since last week, the U.S. has sought to halt the militants' advance on the Kurdish city of Erbil and to relieve Yazidis trapped by the fighters on a barren mountain range through a campaign of airstrikes and aid drops.

A rescue mission could expose U.S. forces to direct fire from the militant group Islamic State, also known as ISIS, and that is a risk Mr. Obama may not be willing to accept.

On Tuesday, the Pentagon continued to lay the groundwork for a rescue by sending another 130 military advisers to northern Iraq to develop options the Pentagon can present to the president. The team will be made up of U.S. Marines and members of American special operations forces who have expertise in difficult missions.

Now, ABC News’ Martha Raddatz says preparations for that possible mission seems to underway; we have boots on the ground in Iraq.

A small team of U.S. Special Forces and Marines, along with British SAS (Special Air Service) assessed the situation on Mt. Sinjar. There are about 30,000 Yazidi refugees still trapped on the mountain (via the Guardian):

A team of US marines and special forces landed on Mount Sinjar in Iraq on Wednesday to assess options for a potential rescue of of 30,000 Yazidi civilians threatened by Islamic extremists and worn down by lack of food.

The personnel flew in on V-22 Osprey tilt-rotor aircraft that can land vertically. They joined a small number of American special forces who, the Guardian has been told, had been on the mountain for some days. That team had been assessing the military and humanitarian situation and guiding US air strikes against Islamic State (Isis) fighters encircling the mountain.

A handful of British SAS soldiers were also in the area to “gather intelligence”, a British official said. The developments were the first confirmation that international forces were on Mount Sinjar.

The team that landed on Mount Sinjar on Wednesday conducted a reconnaissance mission, officials said. “Today a team of fewer than 20 US personnel conducted an assessment of the situation on Mount Sinjar. All personnel have returned safely to Irbil by military air,” a US defence [sic] official said, on condition of anonymity.

Let's see what happens. Defense Secretary Chuck Hagel noted, "This is not a combat, boots-on-the-ground operation." It all depends on what our troops assessed from the mountain today. Right now, the Obama administration has sent an additional 130 American military personnel into Northern Iraq. Although, if the casualty rate is unacceptably high for the president, we shouldn't expect much of a show of force in resolving this crisis.

Defense Department officials said late Wednesday that United States airstrikes and Kurdish fighters had broken the siege on Mount Sinjar, allowing thousands of the Yazidis trapped there to escape.

An initial report from about a dozen Marines and Special Operations forces who arrived on Tuesday and spent 24 hours on the northern Iraqi mountain said that “the situation is much more manageable,” a senior Defense official said in an interview.

“A rescue effort now is much more unlikely,” the official said.