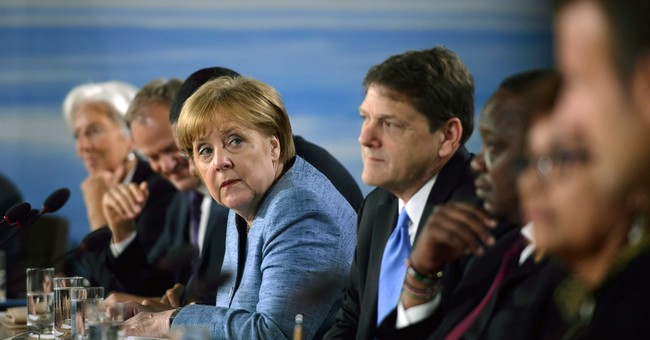 German Chancellor Angela Merkel warned the United States on Sunday that U.S. tariffs on imported steel and aluminum would not go unchallenged.

After President Trump's decision to impose a 25 percent tariff on steel and a 10 percent tariff on aluminum imported from the E.U., Merkel warned the E.U. would be following Canada’s lead, moving forward with countermeasures against the U.S.

“We won’t allow ourselves be ripped off again and again. We will act too,” Merkel said.

She also showed no signs of letting up—even if Trump retaliated by imposing tariffs on cars.

“First of all, we’ll try and see if we can prevent this... And then hope that the EU will respond again in the same unity,” she said.

Merkel said the G7 leaders had agreed to review their trade ties and assess the scope of existing tariffs in order to avoid further trade barriers.

The centre-right leader said a tariff-free area among G7 allies would be an ideal outcome, but she made clear that any talks about such a trade bloc would have to include non-tariff barriers to trade as well as free access to public tenders. (Reuters)

Merkel’s comments come after Canadian Prime Minister Justin Trudeau said Canada would be imposing retaliatory tariffs on the United States. Canada had previously been given a temporary exemption from the steel and aluminum tariffs, but Trump announced at the end of May that its exemption would end.

Trump had delivered a stark warning to America's trading partners not to counter his decision to impose tariffs on steel and aluminum imports. But the summit host, Trudeau, whose nation was among those singled out by Trump, pushed back and said he would not hesitate to retaliate against his neighbor to the south.

"If they retaliate, they're making a mistake," Trump declared before departing the annual Group of Seven summit, which includes Britain, Italy, France, Germany and Japan.

Trudeau later said he reiterated to Trump that tariffs will harm industries and workers on both sides of the U.S.-Canada border. He said unleashing retaliatory measures "is not something I relish doing" but that he wouldn't hesitate to do so because "I will always protect Canadian workers and Canadian interests." (Fox News)

On Saturday, Trump reiterated his belief that the U.S. is being taken advantage of by its trading partners and vowed to put a stop to it.

"We're like the piggy bank that everybody's robbing, and that ends," he said.