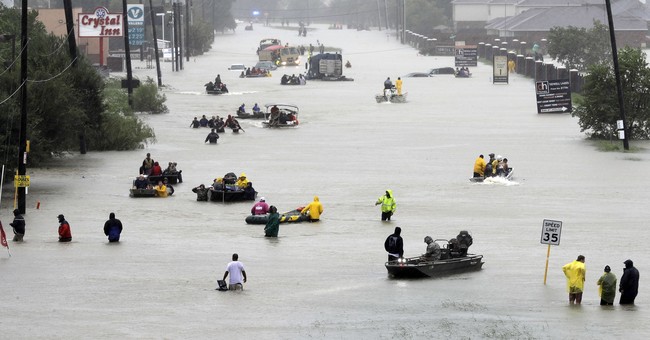 The professor who said Texas deservedHurricane Harvey because of how the state voted has been “relieved of his duties,” the University of Tampa announced Tuesday.

"On Sunday, Aug. 27, visiting assistant professor of sociology Kenneth Storey made comments on a private Twitter account that do not reflect UT's community views or values. We condemn the comments and the sentiment behind them, and understand the pain this irresponsible act has caused," the statement read.

"Storey has been relieved of his duties at UT, and his classes will be covered by other sociology faculty. As Floridians, we are well of the destruction and suffering associated with tropical weather. Our thoughts and prayers are with all impacted by Hurricane Harvey," the university concluded.

Storey tweeted Sunday that he doesn’t “believe in instant Karma but this kinda feels like it for Texas. Hopefully this will help them realize the GOP doesn’t care about them.”

One Twitter user replied, saying, “I guess since we’re a Red state we deserve some bad karma too, right.”

“Yep, those who voted for him [Trump] here deserve it as well,” he responded.

The backlash to his tweets was swift, forcing Storey to issue an apology.

“I apologize for the the tweets,” he told ABC Action News reporter Michael Paluska. “My intention was never to offend anyone. This was a series of tweets taken out of context. I was referring to the GOP denial of climate change science and push to decrease funds from agencies that can help in a time like this. I hope all affected by the storm are safe and recover quickly. I also hope this helps the GOP realize the need to support climate change research and put in place better funding for agencies like NOAA and FEMA.

Recommended
Rep. Crenshaw: The Biden Admin Is 'Trying to Trick You' with Vaccine Statistics
Cortney O'Brien

“I've been clear with that through various tweets that followed the initial tweet. It is hard to express one's full thoughts in 140 characters and I realize that taken out of context some tweets may sound extremely off-putting. I never intended it to be that.”

Too little, too late.