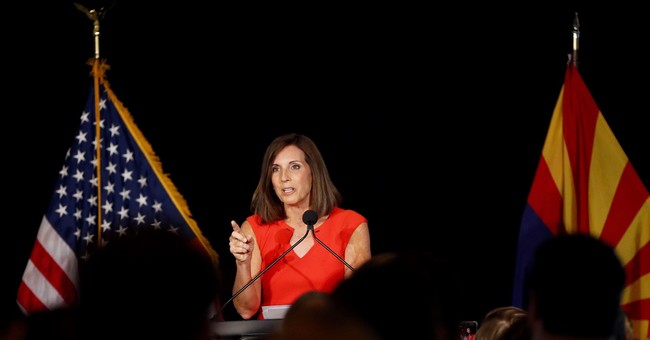 "This is how I see this campaign," McSally said. "It's a choice between a doer and a talker. Between a patriot and a protester. Between a career fighter pilot and a career politician.”

She also accused Sinema of being “left of the Pelosi Democrats,” an association that has become a popular attack in tight races where Democrats seek to disassociate themselves from Pelosi’s leftist agenda in order to appear more moderate.

McSally brought up Sinema’s anti-war past, pointing out that while she was serving in combat her opponent “protested our troops in a pink tutu” after 9/11. She ran an ad to that effect last week.

Sinema told ABC News that she was unfazed by the ad.

"I leave all of that kind of stuff to the pundits and what I do, as everyone in Arizona knows about me, is just put my head down and get the work done and right now I am 100 percent focused on listening to Arizonans and doing my best to earn their vote," she said.

Martha McSally is an extraordinary woman. She was a very talented fighter jet pilot and is now a highly respected member of Congress. She is Strong on Crime, the Border and our under siege 2nd Amendment. Loves our Military and our Vets. Has my total and complete Endorsement!

Martha McSally, running in the Arizona Primary for U.S. Senate, was endorsed by rejected Senator Jeff Flake....and turned it down - a first! Now Martha, a great U.S. Military fighter jet pilot and highly respected member of Congress, WINS BIG. Congratulations, and on to November!