AP Poll: Only a Quarter of Democrats Want to Abolish ICE 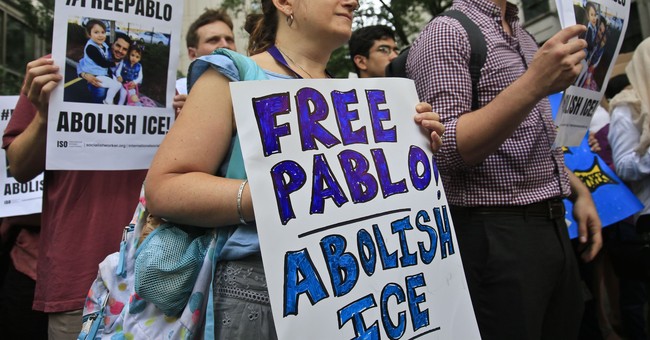 While some Democratic politicians have recently gotten behind a push to abolish Immigration and Customs Enforcement (ICE), a poll released Monday by the Associated Press-NORC Center for Public Affairs Research found that just 25 percent of Democrats are in favor of getting rid of the agency.

Despite only a quarter being in favor of abolishing ICE, 57 percent of Democrats view the agency unfavorably and 57 percent of Republicans view it favorably. Nearly half of Independents – 46 percent – have no opinion.

Only 24 percent of Americans overall support abolishing the agency, 40 percent oppose abolishing ICE, and 34 percent have no opinion.

AP notes that, following the scandal of family separations at the border, ICE is viewed slightly more negatively overall.

On the immigration issue overall, most Americans – 61 percent – disapproved of President Trump’s handling of it, while 38 percent approved. This number has remained the same since February.

The poll’s results were based on “online and telephone interviews using landlines and cell phones were conducted with 1,055 adults.”

The subject emerged following Democratic socialist Alexandria Ocasio-Cortez's stunning primary victory over Democratic Caucus Chair Joe Crowley (D-NY). Ocasio-Cortez is calling to abolish ICE as part of her campaign platform, however, she recently tweeted that that did not mean “abolish deportation.”

#AbolishICE means not having an agency that incarcerates children and sexually assaults women with impunity.

It does not mean abolish deportation.

Also, I have no problem saying white supremacy has no place in this country.

It’s the GOP that struggles to say that. https://t.co/7gbXezIhu5