The Home Stretch: Five Big Numbers to Know From The Week in Politics -- August 31, 2018 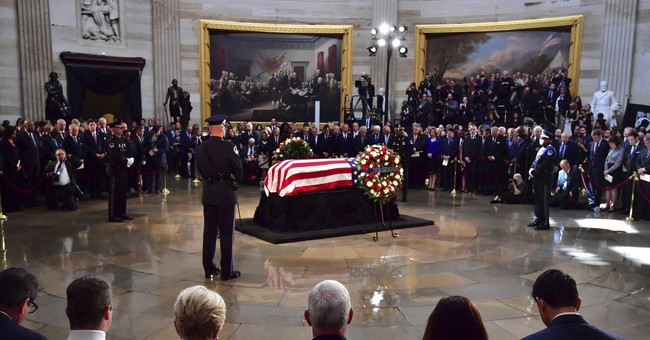 The psychological calendar turns to fall next week, so let's wrap up the final week of summer...

[15,000] - Braving triple-digit temperatures, thousands of Arizonans from across the ideological spectrum queued up to pay their final respects to Sen. John McCain on Wednesday.  Many more will silently pass by the war hero's casket as he lies in state at the US Capitol today.  Of all the moving tributes to McCain -- former Presidents George W. Bush and Barack Obama, each of whom defeated the man in presidential campaigns past, will eulogize McCain tomorrow at the national cathedral -- one speech at the Phoenix ceremony stood out for its humor and poignancy.  I give you longtime Arizona Cardinals wide receiver Larry Fitzgerald:

On a personal note, I've barely been able to watch the images of my friend Meghan, the late Senator's daughter, breaking down in tears as she grieves.  Losing someone whom you adore is gutting, and having to work through those emotions under the glare of cameras and international scrutiny, over the course of almost a full week, must be unimaginably taxing.  We are grateful for McCain's decades of service to this country, and we pray for his family's comfort and strength this week.

[$400 Billion] - We already know that's the annual cost of single-payer healthcare in California alone (here are the national figures), which the left-wing state government has thus far failed to implement.  Doubling -- yes, doubling -- an already bloated budget is...exceedingly complicated, to put it kindly.  But that fiscal math hasn't deterred the Golden State's presumptive next governor to openly embrace the stunningly reckless scheme, adding this week that his "plan" would also use taxpayer dollars to cover illegal immigrants:

California Lt. Gov. Gavin Newsom (D), who is running for governor, said in an interview released Tuesday that he would like to see the state pay for universal healthcare for all illegal immigrants. “I did universal healthcare when I was mayor — fully implemented, regardless of pre-existing condition, ability to pay, and regardless of your immigration status,” Newsom told the podcast Pod Save America, referencing his stint as San Francisco's mayor. “I’d like to see that extended to the rest of the state...San Francisco is the only universal healthcare plan for all undocumented residents in America. Very proud of that,” Newsom added.

This is radical to the point of insanity, but it's the direction that the Democratic Party is headed, in terms of policy and rhetoric.  The party's new gubernatorial nominee in Florida, a moderate perennial battleground, is also calling for a single-payer system that would bankrupt the state, in addition to backing the abolishment of ICE.  In New York, fighting of a hard Left challenger, Gov. Andrew Cuomo (who's been doing a lot of dumb posturing lately), called ICE a "bunch of thugs" during a televised debate. How many people who were aghast at President Trump calling homicidal MS-13 gang members "animals" would applaud or defend describing US law enforcement as "thugs"?

[72 percent] - Brett Kavanaugh's Supreme Court confirmation hearings begin on Tuesday, and we know Democrats are eager to take him down.  Their efforts to do so thus far, however, have been laughably weak and transparently cynical -- so they're almost certainly aware that inducing a major mistake during the hearings is likely their final gasp at stopping him.  If Kavanaugh performs well, he's probably a cinch for confirmation at this point, as a handful of Democrats will be strongly incentivized to jump aboard the bandwagon if it looks like that outcome is inevitable:

A polling memo from WPA Intelligence and Definers Public Affairs, "Political Peril Facing Red State Democrats On SCOTUS Obstruction," shows how Republicans will try to make the issue an albatross: In 10 states polled, "support for Judge Kavanaugh’s nomination is highest in four states that President Trump won by double-digits in 2016 and where incumbent Democratic senators are particularly vulnerable" — North Dakota, Montana, West Virginia and Missouri.

On average in those four states -- home to vulnerable Democratic incumbents Heidi Heitkamp, Jon Tester, Joe Manchin, and Claire McCaskill, respectively -- just over 72 percent of voters say they'd be more likely to vote for a Senator who supported the Kavanaugh nomination.  These aren't the only survey results to that effect, either, a point that undoubtedly is weighing on the minds of the aforementioned members, as well as several others.  Elsewhere on the judicial front, the Trump/McConnell confirmation machine keeps on churning -- aided this week by a bipartisan agreement that allowed Senators to go home earlier than expected:

Big victory for Trump and McConnell, who are already confirming federal judges at an extraordinary pace and are poised to get seven more done today.https://t.co/fRkic91E3E

[34 points] - According to a new NBC poll, the Republican Party's image is underwater by 34 points (26/60) among Millennials, with Democrats running roughly even at (44/42).  Already the largest generational voting bloc in America, Millennials could doom the GOP if their views remain this sour, and they actually turn out to vote.  That's a long-term challenge for the party, especially given young voters' intense antipathy toward President Trump; just 14 percent of this cohort says their midterm vote would be to support Trump.  The "good" news for Republicans is that young voters traditionally do not turn out in large numbers, especially in midterm elections.  Less than a third of Millennials say they're certain to vote in November, with even fewer identifying 2018 as a more important cycle than usual.  Among those who plan to vote, Democrats hold a double-digit lead over Republicans, but that's not even the worst of it:

NBC/UChicago poll of Millennial voters: Ahead of the midterms, the GOP is running neck and neck with...the 'neither party' option. pic.twitter.com/PKfL1prk1M

With a massive field of vulnerable House incumbents to defend and limited resources to go around, Republicans are readying for a painful round of political triage — deciding which lawmakers are worth trying to rescue, and which ones need to be cut loose to fend for themselves in November. GOP officials say as many as 45 Republican-held seats are at serious risk, making it impossible to salvage each one in the costly scramble to protect the party’s 23-seat majority— especially those members who have waged sluggish campaigns and posted lackluster fundraising totals...Behind the scenes, senior party strategists have begun polling to determine which incumbents may be beyond saving...

During a House GOP Conference meeting this spring, NRCC Chairman Steve Stivers told members not to expect the party to bail them out later in the campaign if they failed to pull their weight. He pointed out that the party had already waged a costly and ultimately unsuccessful effort to rescue an underperforming candidate in a Pennsylvania special election. As proof of that approach, the House GOP campaign arm has barely budged despite pleas for additional financial support from endangered Iowa Rep. David Young and his campaign team — at least partly because they view him as a sluggish campaigner, said two senior Republicans familiar with the party’s deliberations. “The NRCC isn’t going to be able to help those who haven’t helped themselves,” said former Pennsylvania GOP Rep. Phil English, who was involved with the committee during his House tenure. “These are very Darwinian decisions. It means selection of the fittest.”

The Senate picture looks brighter, of course, with enormous stakes on that side of Capitol Hill.

You know what fueled "strong business investment"?  Tax reform, which was opposed by every Congressional Democrat last year.  Consumer confidence is up, job satisfaction is up -- and as we mentioned last week, other economic measures look really strong, too.  So why, in the latest Fox News poll, do a majority of Americans (51 percent) only rate the US economy as "fair" or "poor"?  There are clearly some underlying anxieties that remain, in spite of all of the robust top line indicators.  I think that's a reality that Republicans need to grapple with over the coming months, but part of this could be question wording (including options given to respondents). To wit: "A CBS News poll released Sunday found that 44 percent of Americans rate the nation’s economy as 'somewhat good' and another 21 percent as 'very good' -- 65 percent in total, versus only 35 percent who said the U.S. economy is very bad or somewhat bad."  Pick your preferred poll.

[Friday Fun] - Filling in for Kennedy this week on Fox Business Network, I tried my hand at her popular "Topical Storm" segment: