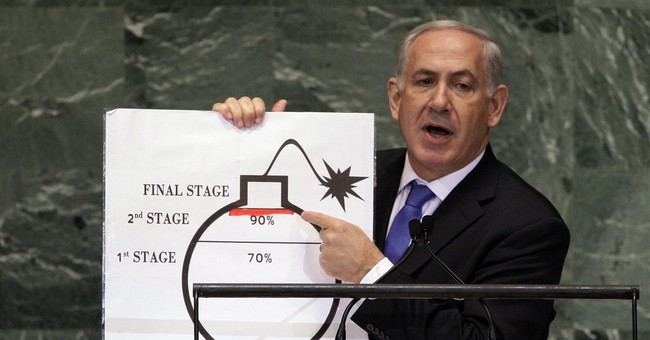 National Democrats are casting about for ways to affirm their support for Israel while also signaling loyalty to President Obama and his bruised ego. Obama has presided over an unprecedented cold spell in US-Israeli relations, thanks to a toxic combination of his personal dislike of Benjamin Netanyahu (evidently shared by many within his administration) and his historically unfriendly posture toward our close ally.  Some Senate Democrats sought to offer Netanyahu an opportunity to address their caucus in private, perhaps giving members cover to demonstrate pro-Obama solidarity by skipping the Prime Minister's controversial address to a joint session of Congress next week. Netanyahu isn't playing along:

Israeli Prime Minister Benjamin Netanyahu declined on Tuesday an invitation to meet with U.S. Senate Democrats during his trip to Washington next week. "Though I greatly appreciate your kind invitation to meet with Democratic Senators, I believe that doing so at this time could compound the misperception of partisanship regarding my upcoming visit," Netanyahu wrote in a letter to Senators Richard Durbin and Dianne Feinstein obtained by Reuters. Durbin and Feinstein, two senior Senate Democrats, invited Netanyahu to a closed-door meeting with Democratic senators in a letter on Monday, warning that making U.S.-Israeli relations a partisan political issue could have "lasting repercussions" ... In his letter, Netanyahu said he agreed "wholeheartedly" that strong ties between the United States and Israel have been built on bipartisan support....He expressed appreciation for the opportunity to address lawmakers from both parties on Tuesday and said he regretted that the invitation has been perceived by some as partisan. "I can assure you my sole intention in accepting it was to voice Israel's grave concerns about a potential nuclear agreement with Iran that could threaten the survival of my country," Netanyahu wrote.


We'll return to the rumored Iran deal in a moment, but first, Congressional Democrats must decide whether their loyalties lie with Obama's partisan sensitivities, or America's best friend in the Middle East.  The White House has been fuming over the fact that House Speaker John Boehner broke protocol by extending an invitation to Netanyahu without notifying the president.  At first, the spun a rumor that the Israeli leader had accepted prior to Obama even knowing about the invite, but that turned out to be false.  The Obama administration has demonstrated little respect for the separation of powers, except when it serves their immediate political interests; in those cases, they become real sticklers.  One Democrat whose added his name to the boycott list is Senator (and former DNC Chair) Tim Kaine, who's apparently following the anti-Israel lead of his fellow Virginia Democrats.  Liberal law professor Alan Dershowitz, a strong Israel supporter, is aghast at his party's conduct:

As a liberal Democrat who twice campaigned for President Barack Obama , I am appalled that some Democratic members of Congress are planning to boycott the speech of Israeli Prime Minister Benjamin Netanyahu on March 3 to a joint session of Congress. At bottom, this controversy is not mainly about protocol and politics—it is about the constitutional system of checks and balances and the separation of powers. Under the Constitution, the executive and legislative branches share responsibility for making and implementing important foreign-policy decisions. Congress has a critical role to play in scrutinizing the decisions of the president when these decisions involve national security, relationships with allies and the threat of nuclear proliferation. Congress has every right to invite, even over the president’s strong objection, any world leader or international expert who can assist its members in formulating appropriate responses to the current deal being considered with Iran regarding its nuclear-weapons program. Indeed, it is the responsibility of every member of Congress to listen to Prime Minister Netanyahu, who probably knows more about this issue than any world leader, because it threatens the very existence of the nation state of the Jewish people. Congress has the right to disagree with the prime minister, but the idea that some members of Congress will not give him the courtesy of listening violates protocol and basic decency to a far greater extent than anything Mr. Netanyahu is accused of doing for having accepted an invitation from Congress.


Dershowitz notes that it's really Obama who's attacking the Constitution's separation-of-powers framework, reasoning, "what the president objects to is not that Mr. Netanyahu will speak to Congress, but the content of what he intends to say. This constitutes a direct intrusion on the power of Congress and on the constitutional separation of powers."  True. Obama has long been obsessed with the legacy project of striking a "groundbreaking" and "historic" nuclear deal with regime in Tehran.  Netanyahu fears that the bargain would endanger his people, and would foolishly assume the good intentions of Iran's leaders.  Obama doesn't want that message forcefully delivered to Congress, which could complicate the politics surrounding his prized negotiations.  The tentative outlines of a possible pact with Iran are starting to leak into the press:

The United States and Iran are shaping the contours of a deal that would initially freeze Tehran's nuclear program but would allow it to slowly ramp up activities that could be used to make nuclear arms over the last years of the agreement's duration...The idea would be to reward Iran for good behavior over the last years of any agreement, by gradually lifting constraints on its uranium enrichment program imposed as part of a deal that would also would slowly ease sanctions on the Islamic Republic. Iran says it does not want nuclear arms and needs enrichment only for energy, medical and scientific purposes, but the U.S. fears Tehran could re-engineer the program to its other potential use - producing the fissile core of a nuclear weapon. The U.S. initially sought restrictions lasting for up to 20 years; Iran had pushed for less than a decade. Iran could be allowed to operate significantly more centrifuges than the U.S. administration first demanded, though at lower capacity than they currently run. Several officials spoke of 6,500 centrifuges as a potential point of compromise. If the sides agree on 15 years, for instance, the strict controls could be in place for 10 years with gradual lifting over five. Possible easing of the controls could see Iran increasing the number of enriching centrifuges back toward the 10,000 or so it now has operating, and increasing the level of enrichment while keeping it well below levels approaching weapons-grade.


In that same Special Report segment, Stephen Hayes recapped the reporting of his Weekly Standard colleague, who has revealed the Obama administration's own assessment of a deadly arrangement between Iran and Al Qaeda. The US government regards Iran as the world's chief exporter of terrorism, notorious for habitually cheating on international deals. It's no wonder that even some liberal Democrats are gravely concerned about the White House's interactions with the dangerous, genocidal regime -- whose negotiators are reputed to be abusive toward their Western counterparts. Netanyahu's speech is scheduled for next Tuesday. Polls are mixed regarding the public's stance on the circumstances surrounding his remarks, but Israel itself remains extraordinarily popular among the American people.