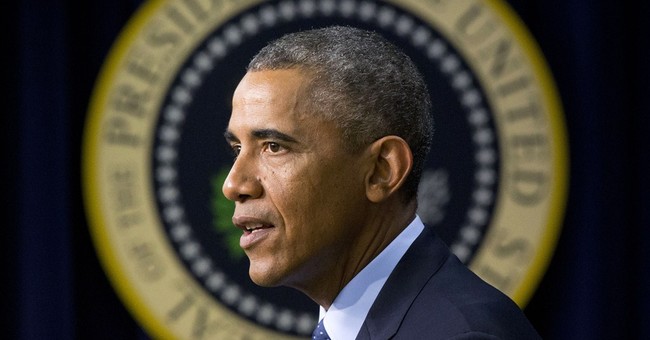 And if you believe Obama's former Secretary of Defense, Robert Gates, airstrikes won't be sufficient. Gates isn't an outlier among the military's brain trust, either. Recall that the Pentagon's proposed battle plan for defeating ISIS reportedly entailed 'boots on the ground,' which the president overruled.  Meanwhile, another former Obama Defense Secretary is lambasting the administration's derelict handling of Iraq in a new memoir.  Leon Panetta says the president's team placed domestic politics above America's security interests, a devastating assessment from a Democrat whose public service spans decades.  "The White House was so eager to rid itself of Iraq that it was willing to withdraw rather than lock in arrangements that would preserve our influence and interests," Panetta writes.  The Washington Free Beacon has more:

Through the fall of 2011, the main question facing the American military in Iraq was what our role would be now that combat operations were over. When President Obama announced the end of our combat mission in August 2010, he acknowledged that we would maintain troops for a while. Now that the deadline was upon us, however, it was clear to me–and many others–that withdrawing all our forces would endanger the fragile stability then barely holding Iraq together. Privately, the various leadership factions in Iraq all confided that they wanted some U.S. forces to remain as a bulwark against sectarian violence. But none was willing to take that position publicly, and Prime Minister Nouri al-Maliki concluded that any Status of Forces Agreement, which would give legal protection to those forces, would have to be submitted to the Iraqi parliament for approval.

That made reaching agreement very difficult given the internal politics of Iraq, but representatives of the Defense and State departments, with scrutiny from the White House, tried to reach a deal. We had leverage. We could, for instance, have threatened to withdraw reconstruction aid to Iraq if al-Maliki would not support some sort of continued U.S. military presence. My fear, as I voiced to the President and others, was that if the country split apart or slid back into the violence that we’d seen in the years immediately following the U.S. invasion, it could become a new haven for terrorists to plot attacks against the U.S. Iraq’s stability was not only in Iraq’s interest but also in ours. I privately and publicly advocated for a residual force that could provide training and security for Iraq’s military. To my frustration, the White House coordinated the negotiations but never really led them. Officials there seemed content to endorse an agreement if State and Defense could reach one, but without the President’s active advocacy, al-Maliki was allowed to slip away. The deal never materialized. To this day, I believe that a small U.S. troop presence in Iraq could have effectively advised the Iraqi military on how to deal with al-Qaeda’s resurgence and the sectarian violence that has engulfed the country.


Reckless, detached, indifferent. A failure of leadership. This, from a president who couldn't be bothered to carefully oversee the implementation of his signature domestic project (with disastrous consequences), and who skips his in-person daily intelligence briefings more often than not, then blames others for missing signs that they had, in fact, attempted to bring to his attention.  Obama chose to dismiss the ISIS threat as akin to a 'jayvee' team on national television, only to deny making the comparison when it blew up in his face.  This is what Maureen Dowd (!) has dubbed the 'outsourced' presidency. Now that the many, many warnings about the implosion of Iraq and the advance of ISIS have been horrifyingly vindicated, Obama has ordered military action to mitigate the damage and reverse the terrorists' momentum.  Part of his plan is to train and arm 'moderate' Syrian rebels, a gambit he laughed off as a "fantasy" just a few weeks ago.  If this boots on the ground-by-proxy endeavor fails to bear fruit (it's off to a hell of a start), Americans appear to be prepared to send in American troops to take the fight to the enemy:

So the public favors ground troops if airstrikes "aren't enough" -- and on that score, a substantial majority apparently agrees with Robert Gates and the Pentagon war planners.  Nearly 80 percent of respondents support the current airstrikes, even as two-thirds say the White House lacks a clear strategy to destroy ISIS.  Fully 74 percent of registered voters say Obama has not been "tough enough" in confronting radical Islamist terrorists during his presidency.  The Bin Laden raid feels like a distant memory.  And in spite of the administration's rhetorical games, a super-majority of the country (63/31) believes we are "at war" with ISIS. The American people's confidence in Obama remains low across a broad spectrum of issues.  From the Fox poll:


The president's overall approval rating among likely voters (the numbers above are among registered voters) is (39/53) or (-14). He's underwater by a similar margin (-16) in a new Associated Press poll, as well.

UPDATE - This is a big deal on the boots-by-proxy issue.  And welcome news:

The Turkish parliament voted Thursday to authorize its military to join the fight against the Islamic State in Iraq and Syria (ISIS), adding another prominent Muslim country to the U.S.-led coalition. Turkish lawmakers approved action in a 298-98 vote, CNN reported. While the country had previously pledged to join the coalition, it has not yet conducted any military actions. The plan reportedly allows the Turkish military to enter both Iraq and Syria to fight ISIS and would allow coalition troops to travel through Turkey.