In his war speech last night, President Obama was at strikingly adamant about what the US mission to "degrade and destroy" ISIS would not entail: American ground troops in a combat role.  The 475 additional personnel being deployed to the region are only authorized assist with "training, intelligence and equipment."  Direct American intervention will be limited to a protracted campaign of airstrikes, in Iraq and -- for the first time -- Syria.  The Washington Post reports today that when the president tasked military leaders with devising the best strategy to defeat ISIS, the Pentagon presented a plan that involved a limited number of combat "boots on the ground."  They were rebuffed, in favor of a more politically-palatable light footprint approach:


Such a mission was not the U.S. military’s preferred option. Responding to a White House request for options to confront the Islamic State, Gen. Lloyd Austin, the top commander of U.S. forces in the Middle East, said that his best military advice was to send a modest contingent of American troops, principally Special Operations forces, to advise and assist Iraqi army units in fighting the militants, according to two U.S. military officials. The recommendation, conveyed to the White House by Gen. Martin Dempsey, the chairman of the Joint Chiefs of Staff, was cast aside in favor of options that did not involve U.S. ground forces in a front-line role, a step adamantly opposed by the White House...Recommitting ground combat forces to Iraq would have been highly controversial, and most likely would have been opposed by a substantial majority of Americans. But Austin’s predecessor, retired Marine Gen. James Mattis, said the decision not to send ground troops poses serious risks to the mission. “The American people will once again see us in a war that doesn’t seem to be making progress,” Mattis said. “You’re giving the enemy the initiative for a longer period.”


This turn of events was inevitable, given the instincts and priorities of the Oval Office's current occupant.  According to the New York Times' bureau chief in Baghdad, the Obama administration has  serially misled the American people about on-the-ground realities in Iraq in order to protect a politicized "receding tide of war" illusion.  The president shrunk from his own red line in Syria last year due, at least in part, to heavy domestic pressures, ultimately resorting to a fake "solution" that has since collapsed.  Having ignored and dismissed ISIS for years, the president has finally been pressed to play catch-up with events.  Public opinion has turned sharply in favor of intervention, likely spurred by grisly images of beheaded American journalists broadcast around the world, but most are still wary of ground troops.  Obama -- once again leading from behind with no discernible strategy beyond 'win the current news cycle' -- is giving the public what it wants at the moment.  Nothing more, nothing less.  Following that "best military advice" would have required the president to forcefully make the case that a limited American ground force was vital to victory. He clearly had no appetite to do so, as it would have entailed further eroding his anti-war cred and infuriating his core base ahead of an election.  Even with the scaled-back mission, Hill Democrats are fracturing over whether to support the president's path forward:

Vulnerable Democratic senators were split — or in some cases, silent — on President Obama’s proposal to tackle the growing terrorist threat in the Middle East. Sens. Mark Begich (D-Alaska) and Mark Udall (D-Colo.), both facing tough reelection fights this fall, issued statements sharply critical of Obama’s proclaimed plans to launch military attacks unilaterally and to arm Syrian rebels....[Udall], like every Democrat who weighed in Wednesday, said he plans to continue to demand further details from the administration on its plans.Begich, one of four Democratic incumbents running for reelection in a red state, said, while he supports airstrikes, he’s opposed to arming rebels...But another quartet of vulnerable Democrats, Sens. Kay Hagan (N.C.), Mark Pryor (Ark.), Al Franken (Minn.) and Jeanne Shaheen (N.H.), were cautiously supportive of Obama’s remarks...The issue is politically fraught for Democrats, as support for military action risks alienating progressive Democrats opposed to an aggressive, hasty response, like the one that launched the Iraq War, which is now seen by many as a quagmire. But polling has shown Americans overwhelmingly support military action, and are expressing higher levels of fear and concern for their safety than they have in recent memory, increasing the pressure to act. And the division within the party underscores the challenge Congress faces in rallying behind a passable proposal for military action against ISIS.


Of course, if President Obama wanted a decisive show of unity from Congress, he would ask for an authorization vote on the expanded air campaign.  Such a resolution would pass overwhelmingly, neutralizing continuing questions about the bounds of his authority in escalating a renewed military conflict.  But the White House, with some bipartisan backing, insists that Obama possesses all the authority he needs to pursue his strategy.  Read Eli Lake's piece detailing Obama's remarkable, shall we say, evolution on presidential war powers.  Candidate Obama wouldn't recognize this man, who is now relying on Congress' post-9/11 Authorization of Military Force (AUMF) as the legal grounds for ratcheting up a new war in Iraq and Syria.  Ironically, just last year he was urging Congress to roll back and eventually abrogate that very AUMF: "Not every collection of thugs that labels themselves al Qaeda will pose a credible threat to the United States," he said at the National Defense University. "Unless we discipline our thinking, our definitions, our actions, we may be drawn into more wars we don’t need to fight, or continue to grant Presidents unbound powers more suited for traditional armed conflicts between nation states. So I look forward to engaging Congress and the American people in efforts to refine, and ultimately repeal, the AUMF’s mandate. And I will not sign laws designed to expand this mandate further."

Well, promise (technically) kept.  He isn't "signing laws" to expand the mandate, per se.  He's expanding it unilaterally.  What Obama is directly asking Congress for is permission and appropriations to arm so-called moderate rebels in Syria, which is the most treacherous element of the four-point plan he laid out last night.  Obama backhanded this gambit as "fantasy" just last month, perhaps for good reason.  The White House says it would "welcome" a show of solidarity from Congress, but is ambivalent about whether vote on a no-brainer authorization of force.  Obama wants Congress on the hook with him for the riskier and more divisive Syria business.  Congressional Democrats, in particular, are in a tough spot, for reasons cited in the story above.  On one side of the tightrope is their reflexively pacifist base (which may not be quite as pacifist as advertised, now that it's no longer Bush who's mongering the wars or whatever); on the other is the rest of the American public:


Wow, GOP actually has a bigger edge on terrorism issue today than in 2002 http://t.co/e0RPe5AXqT 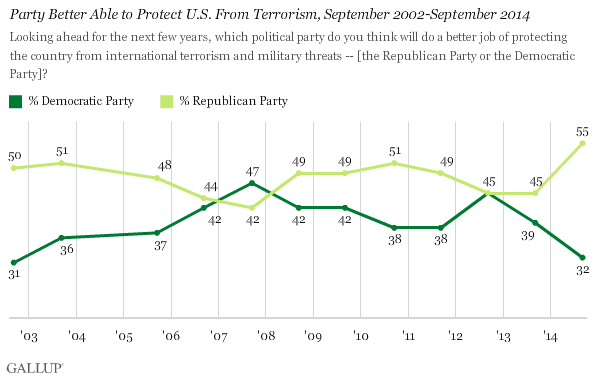 JUST IN: John Kerry to CNN: The U.S. is not at war with ISIS


.@oknox: “What does victory look like here? What does destroy mean?” .@PressSec: “I didn’t bring my Webster’s dictionary”