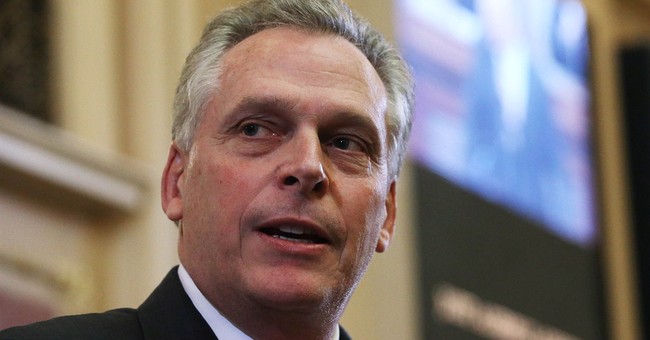 Virginia politics have gotten unusually shady recently. The last governor is under indictment, the current governor founded a company that's been dogged by federal investigations into some nasty allegations, and now a suspect-looking maneuver in Richmond has given Republicans a slim majority in the state Senate. The Washington Post reports:

Republicans appear to have outmaneuvered Gov. Terry McAuliffe in a state budget standoff by persuading a Democratic senator to resign his seat, at least temporarily giving the GOP control of the chamber and possibly dooming the governor’s push to expand Medicaid under the Affordable Care Act. Sen. Phillip P. Puckett (D-Russell) will announce his resignation Monday, effective immediately, paving the way to appoint his daughter to a judgeship and Puckett to the job of deputy director of the state tobacco commission, three people familiar with the plan said Sunday. They spoke on the condition of anonymity because they were not authorized to discuss the matter. The news prompted outrage among Democrats — and accusations that Republicans were trying to buy the Senate with job offers in order to thwart McAuliffe’s proposal to expand health coverage to 400,000 low-income Virginians. Puckett, a senator since 1998, did not respond to calls seeking comment. Other Republicans denied that Puckett was offered the jobs in exchange for his resignation.


Sure. The quid pro quo isn't subtle, perfunctory denials notwithstanding. Puckett's seat is in a heavily-Republican district, by the way, so Democrats will struggle to retain it in a special election. Unseemly as it appears, this sort of gambit is hardly unprecedented, nor is it exclusive to one party. The White House offered Max Baucus a cushy and prestigious incentive to parachute out of his Senate seat in Montana, which Democrats feared he would lose in 2014 (the GOP still stands to pick up that seat). Team Obama also dangled a "high-ranking" Navy job in front of Joe Sestak to try to persuade him to end his 2010 primary challenge to Sen. Arlen Specter, who had switched parties a year earlier. Sestak refused, beat Specter, then lost to Republican Pat Toomey in the general. All of which is to say that Democrats often play for keeps, and conservatives frequently demand that Republicans answer in kind; they've gotten their wish here.

By way of background, Gov. Terry McAuliffe's stubbornness on Obamacare -- an issue that nearly sank him last November -- has precipitated a weeks-long budget impasse. McAuliffe insists that any budget he signs must expand Medicaid under the new law. Republicans oppose the expansion. The politics of the issue are complicated, as three moderate GOP Senators support McAuliffe's Medicaid plan, while a number of Virginia Senate Democrats aren't thrilled about the prospect of a government shutdown over the issue. McAuliffe used the federal shutdown to hammer his Republican opponent during the 2013 campaign, prompting the counter-charge that McAuliffe was already threatening a state-level shutdown over Obamacare. Left-leaning Politifact ranked that allegation 'false' at the time, but its prescience has now been vindicated. McAuliffe's actions are pushing Virginia to the brink of a government shutdown, all because he isn't getting his way on a costly government-enlargement scheme. It's important to understand that the newly-minted Republican Senate majority doesn't alter the base calculus of the showdown at all; anti-Obamacare Republicans control the Virginia House of Delegates by an astounding 68-32 margin. McAuliffe's Medicaid expansion endeavor was always going to be dead on arrival in the lower chamber. What this weekend's development means, however, is Republicans will likely have the votes to pass a "clean" budget -- with the Medicaid provisions stripped away -- out of both houses of the legislature: