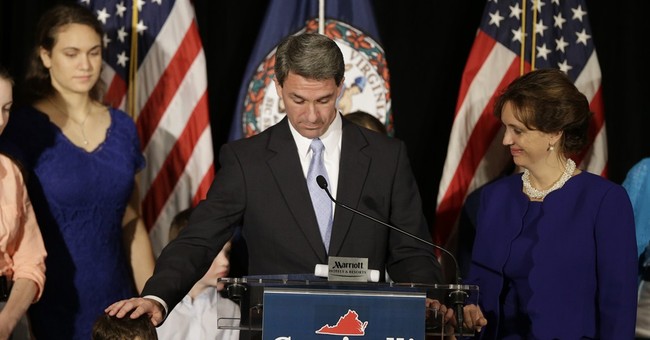 In Virginia, it wasn't supposed to be this close:


But all of a sudden, it was. Republican Ken Cuccinelli shocked the commentariat by leading the raw vote total all deep into the 9pm ET hour, when more than 90 percent of precincts were reporting. Only then did some numbers from heavily blue Northern Virginia counties begin to cascade, pushing McAuliffe over the top. What was widely expected to be a relatively easy Democrat pick-up turned into a too-close-for-comfort, 2.5 percentage point squeaker. As percentages go, Cuccinelli outperformed Mitt Romney in the state. What happened? Several factors: (1) Obamacare. Exit polls showed that a majority of those Virginians who voted yesterday disapproved of the president's job performance (46/54), and opposed Obamacare by roughly the same margin. As the president's healthcare law tanked -- and following the resolution of the federal government shutdown -- Cuccinelli turned his rhetorical guns onto the issue and blasted away through election day. Virtually every major poll showed McAuliffe winning by at least six points, so it's fairly clear that Obamacare's failures tightened the race in its home stretch. That must be disquieting for vulnerable 2014 Democratic incumbents, especially those who actually voted for the law in 2010. To that end, here's how the Obama brand played in a state that voted for him twice:


Also, the conventional wisdom that the shutdown killed Cuccinelli isn't borne out in the data. Virginia voters blamed Obama and Republicans almost equally (48/45) for that impasse; not great news, but more neutral than many would have expected. Then again, the shutdown disproportionately impacted Northern Virginia voters, upon whom McAuliffe relied for his final margin of victory.

(2) Money. Cuccinelli was outspent by a staggering $15 million in this race, to say nothing of outside money. In the final week of the campaign alone, McAuliffe swamped Cuccinelli on television by a ten-to-one margin. Questions arise: Why did the RNC spend just one-third of its 2009 Virginia gubernatorial tab on this race, and why did the RGA effectively write off the contest prematurely? Yes, Cuccinelli looked like a sure loser a few weeks ago, but didn't the party's polling show significant movement late? Did the party's polling fail...again? On the other side of this equation, where was the tidal wave of grassroots and conservative cash for Cuccinelli? He's precisely the sort of candidate strong conservatives insist the party must nominate to win. He secured the nomination (in a convention, not a primary), then struggled to raise funds from wire to wire. Lots of blame and recriminations to go around.

(3) Birth control. I can't tell you how often I saw ads and mailers warning that Ken Cuccinelli wants to ban birth control, and that he opposes abortion even in the cases of rape and incest. Cuccinelli never even came close to adequately responding to these accusations. Terry McAuliffe's abortion position is extreme. He's in favor of late-term and taxpayer-funded abortion. Did voters hear about that? No. Did the Republican nominee have any designs on outlawing birth control? Of course not, but I never actually heard him say so. Part of this can be chalked up to getting beaten like a rented mule on TV spending, but that's not the whole story. Cuccinelli's campaign wasn't especially well run, and Cuccinelli wasn't a great candidate. They focused on McAuliffe's corruption (understandably so, though Democrats muddied the waters with the Star Scientific scandal) and jobs. That's fine, but if young women think your guy is going to target their birth control, they won't even listen to his jobs plan. Unmarried women broke 67/25 for McAuliffe. How many defeats will it take for Republicans to draw up an effective strategy to combat this line of attack?

(4) Bob McDonnell. Virginia's current Republican governor remains popular, in spite of the aforementioned Star Scientific flap. His job approval among yesterday's electorate was 52/41. But because of lingering ethics questions, he was a non-factor in this race -- and as a result, potentially one of the most effective local surrogates for Cuccinelli was sidelined. Was this McDonnell's choice? (He and Cuccinelli have had public disagreements on several issues, and Cuccinelli beat out McDonnell's Lt. Governor, the treacherous Bill Bolling, for the nomination). Or did Team Cuccinelli choose to distance their candidate from the governor's ethics issues? Silver linings: Virginia's House of Delegates remains deep, crimson red, as Republicans beat back Democrats' attempts to eat away at their overwhelming majority. McAuliffe's agenda will run into a brick wall on a host of issues. Also, it looks like the GOP's Attorney General candidate will probably pull out a very tight race, although Democrats' lawyers will try to work their magic in a recount. If Mark Obenshain hangs on, he'd deny Democrats a sweep of the major statewide offices. I'll leave you with video of Cuccinelli's concession speech. A pull quote from the visibly devastated candidate: "Despite being outspent by an unprecedented $15 million, this race came down to the wire because of Obamacare."

UPDATE - One more point. Mike Bloomberg's huge anti-gun spending on behalf of McAuliffe likely endangered the Democrat more than anything else:


Bloomberg had a rough evening, as a big tax hike proposition he helped bankroll in Colorado bit it hard at the ballot box.