As someone who makes part of his living on television, I can attest that delivering a strong, polished message under the bright lights isn't as easy as it looks. That's why my heart generates automatic pangs of empathy when people lose a train of thought at an inopportune moment (with this fairly recent example being perhaps the most painful to watch). In spite of his blowhard leftism, I can't enjoy what should be some delicious schadenfreude over Sen. Sheldon Whitehouse's (D-RI) unfortunate struggles on Fox News Sunday -- although I'm not overly disappointed that the Free Beacon flagged and posted the clip. Things get really bad about 30 seconds in:


Rather than belabor Whitehouse's stammering (he's been a busy boy, hasn't he?), I'll simply point out that his "evidence" in support of Obamacare is (a) an anecdote about a single mother who's benefited from the law (weren't Democrats just complaining about governing by anecdote on Obamacare, even though they do so all the time?) and (b) laudatory comments about "filling the donut hole" on Medicare's prescription drugs benefit. While that second point, once he finally spat it out, may sound attractive to seniors, its reality is far less attractive to taxpayers and people with a stake in Medicare's solvency. Avik Roy broke it down in 2012:


In order to guard against these problems of overspending and overutilization, Congress incorporated a critical feature into Part D. The drug plan would require seniors to pay a share of their drug spending below a certain level, so as to ensure that they had “skin in the game” and would be discouraged from wasteful spending. Seniors were required to pay for 25 percent of drug spending below a certain level ($2,830 in 2010) and 100 percent of drug spending in a middle level (between $2,830 and $6,440). After spending through the middle level, seniors would only pay 5 percent of any additional costs. It’s that middle level, where seniors pay 100 percent of the costs, that came to be derisively known as the “donut hole.” The thresholds were designed by actuaries who mined actual drug usage statistics to identify the optimal price points...This cost-sharing system has worked astonishingly well. Medicare Part D has spent 30 percent less money than the Congressional Budget Office originally projected it would. Last year, it became the first federal health program in memory in which spending actually decreased from year-to-year. Obamacare closes the donut hole.


Obamacare takes one of the most efficient elements of "Medicare as we know it," and breaks it, apparently in the quixotic hope of making seniors less suspicious of the new law. Incidentally, while some liberals are rejoicing over a new CBO report indicating that Obamacare's subsidies will cost the government less than previously projected, the real actuarial picture is effectively unchanged. Here's former CBO director Douglas Holtz-Eakin:

Re CBO #ACA update, this is just tweaks at the edges. Love it or hate it, the #ACA is the same.


Among the parade of negatives embedded in CBO's blockbuster February report, Democrats aren't likely to talk about the nation's deficit trajectory, as confirmed by this week's update:


The nation is doomed to return to trillion-dollar shortfalls by 2024 if lawmakers don't alter existing tax and spending policies, congressional auditors warned on Monday. The culprits? Rising health care costs, an aging population, growing interest payments on federal debt, and an expansion of federal subsidies for health insurance, according to the Congressional Budget Office. This rising debt would have serious consequences, CBO warns. Federal spending on interest payments would increase considerably, and lawmakers would have less flexibility to use tax and spending policies to respond to unexpected challenges.


Policy-makers in Washington must exercise prudence by resisting the politics of now, in order to secure the future. This would require making slightly difficult choices at present to head off the painful austerity that's headed our way. One party has proactive solutions in mind; the other does not. I'll leave you with the latest Obamacare poll results, courtesy of The Economist and YouGov (headlined 'Obamacare: Still Divisive , Still Disliked): 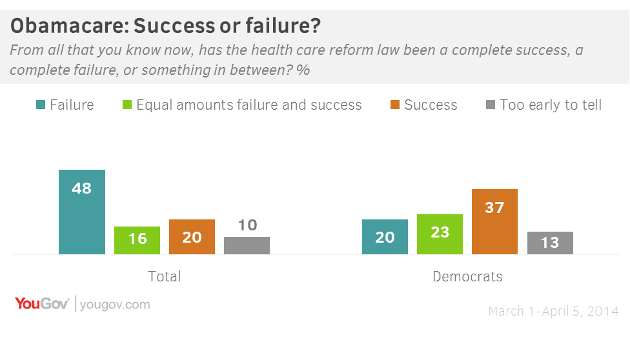