Harry Reid on Obamacare Horror Stories: "All of Them Are Untrue" 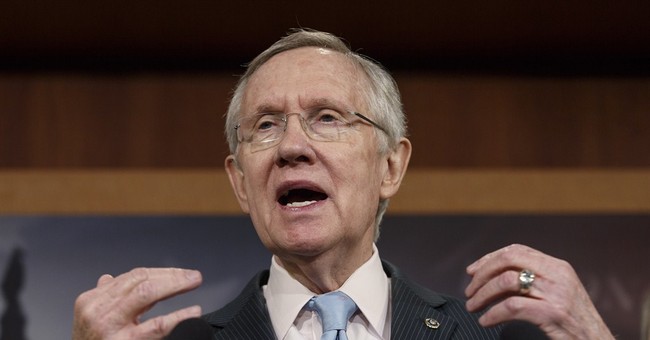 Not a tiny handful. Not even an imagined majority. No, every last person who says they've been harmed by Obamacare is lying, according to the Majority Leader of the United States Senate:

He specifically cites the story of a woman we wrote about earlier in the week, whose story...hasn't been debunked. You'll recall that Rep. Gary Peters, Michigan Democrats' presumptive Senate nominee, had his lawyers pressure television stations to refuse to air an anti-Obamacare ad starring a cancer patient who's been hurt by the new law. Julie Boonstra has since explained her situation in some detail and would like to discuss her predicament with the Congressman who's acted to shut down her story. Megyn Kelly followed up on this controversy, telling viewers that Peters has "repeatedly" turned down interview requests. Note well how the Democrat on this panel stammers through rote denunciations of the Koch Brothers (she, like Reid, would rather make this about billionaire boogie men than ordinary victims) while claiming that Ms. Boonstra's story is "not factual" (via Twitchy):

We addressed the facts in our Monday post. Though Boonstra's premiums have dropped under her new plan, she views its new and unpredictable out-of-pocket costs as a financial burden that she is unable to bear. One MSM fact-checker determined that those cross-currents might even out over time -- a hypothetical outcome that's a far cry from Democrats' promise of substantially lower rates. Plus, Boonstra was denied the ability to keep a plan with which she was fully satisfied, a glaring betrayal that must be particularly frightening for a cancer patient. Unable to secure a meeting with the powerful man who's essentially calling her a liar, Boonstra dropped a letter off at Peters' home:

Julie Boonstra left this letter to @RepGaryPeters at his house. He was inside but did not answer the door. pic.twitter.com/fxRLYy8cvJ


She makes three central points: (1) I couldn't keep my plan, so that political lie affected me personally. (2) Politicians and media members do not understand my financial situation better than I do. (3) I should be free to share my experience as I see fit. The Left begs to differ. Indeed, their new tactic -- carried out by everyone from White House spokesmen, to the Senate Majority Leader, to lefty bloggers -- is to assert that Obamacare victims are figments of conservatives' imagination, whose lies are being foisted upon the public by shady rich people. Brian Beutler of left-wing Salon excoriates conservative "hacks" for defending "misleading" ads like the one featuring Ms. Boonstra. He congratulates his fellow liberals for being on the righteous end of a "hack gap," in which right-leaning media types are much more willing to disregard facts and engage in tendentious arguments to suit their ideology. Liberals also pat themselves on the back for winning the "wonk gap," wherein they simply have more expertise on everything. (Click through for a very special look at these two "gaps" in action). Professional Democrat Greg Sargent of the Washington Post is also characteristically mopey over how conservatives are, in his mind, using a cancer patient as a "human shield." The strategy makes it difficult for lefties to poke holes in her story without looking mean-spirited, he whines. Yes, Greg, please do tell us how it feels to witness your ideological opponents use sympathetic spokespeople to make emotional appeals in furtherance of a political cause. Especially if all the details don't quite add up. Mother Jones' Kevin Drum wonders if there's a single person in America who's actually been hurt by Obamacare (Harry Reid has since weighed in), while noted vicious hack and New York Times columnist Paul Krugman dismisses Obamacare horror stories as "hooey." Over at National Review, Alec Torres humbly suggests that Krugman might try reading his own newspaper from time to time:


If Paul Krugman read the paper he writes for, he would have heard about Mike Horrigan, a lifelong Democrat and a former Obamacare supporter. As the Times wrote in December, Horrigan’s “coverage by a state high-risk insurance program was eliminated, then replaced by a more expensive plan. His wife’s individual plan was canceled for being substandard, then suddenly renewed — also at a higher price.” The Times also brought out the story of Barbara Meinwald, whose temporary plan with fewer doctors would cost her $5,000 more a year. “Meinwald also looked on the state’s health insurance exchange,” Anemonia Hartocollis writes, “but she said she found that those plans did not have a good choice of doctors, and that it was hard to even find out who the doctors were, and which hospitals were covered.” Camille Sweeney, written about in the same article, was “dismayed” that neither her pediatrician nor general practitioner was on the plans offered on her state’s exchange.


Literally tens of millions of Americans have been impacted by Obamacare's false promises. From the truly horrific stories, to the millions whose coverage was canceled (or whose plans' networks have been pared down), to the tens of millions on the individual and small group markets whose costs are increasing, vast swaths of the population have been harmed by this law -- with more pain on the horizon. If you choose to deny or ignore this empirical reality, you might just be the sort of cartoonish hack that you smugly believe only exists on "the other side." And to Krugman et al, this is what non-hackery looks like.