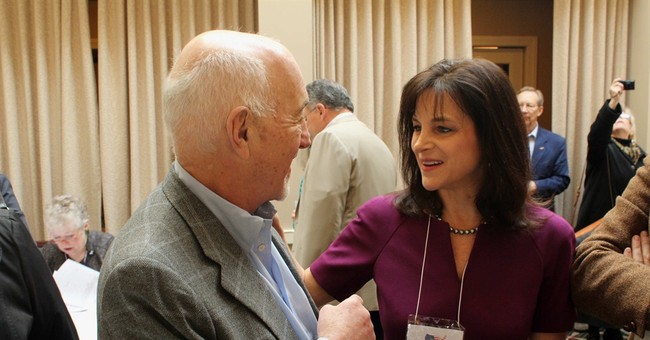 Perhaps one shouldn’t get too excited. After all, GOP establishment-backed candidate Monica Wehby hasn’t even been crowned the Republican nominee yet; nor is it a foregone conclusion that she will be. But a new poll does show her edging her (presumed) general election opponent, incumbent Sen. Jeff Merkley (D-OR), by a percentage point.

Still, only one other (non-internal) poll has been conducted in the state thus far, which showed Wehby losing to Merkley by double-digits. Now a few weeks later she’s slightly ahead? Interesting. Of course, we’ll need to see more polling before we can definitively say she’s “the frontrunner.” But the survey's top line numbers do look promising for the establishment’s hand-picked Republican candidate (via The Daily Caller):

Wehby, a Portland-based pediatric neurosurgeon, received the support of 40 percent of respondents, while an additional five percent say they are leaning towards supporting the first-time candidate. Merkley, who was elected to the Senate in 2008, garners the support of just 39 percent of respondents, with two percent saying they lean towards supporting him.

Fourteen percent of voters said they do not know whom they would support.

According to Vox Populi’s Brent Seaborn, the poll shows that “the Senate race in Oregon is very much in play for Republicans.”

One issue that could be sinking Oregon Democrats, including Merkley, is the failure of Cover Oregon. Indeed, the state wasted some $300 million on its failed Obamacare website, which flopped before it even got off the ground. Hence why we’re seeing numbers like these:

Brutal. Add to the mix a perfectly acceptable (albeit pro-choice) Republican candidate running an impressive ad campaign, and the GOP establishment will tell you they've got a very winnable race on their hands.