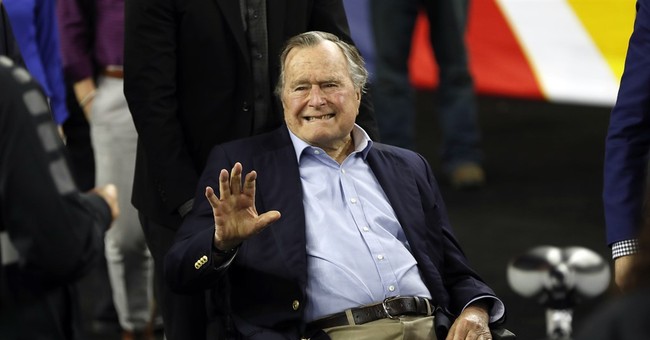 The cast of Broadway's "Hamilton" treated former President George H. W. Bush to a private performance at his Houston office last weekend. Bush had plans to see the musical with his wife Barbara last month, but she sadly passed away on April 17. So, the musical came to him.

A complete joy to welcome the “HamFam” — the cast and crew of @HamiltonMusical — to our Houston office for a special performance I will never forget. History never sounded so powerful. pic.twitter.com/dL224SkMKn

"Hamilton" creator and former star of the show Lin-Manuel Miranda told President Bush, who suffered his own health scare last month, that the honor was theirs.

It was a moving gesture and Bush was clearly touched by the visit. He still hopes to attend the full performance before its Houston run ends on Sunday, according to his spokesman Jim McGrath.

The cast of "Hamilton" has experience performing in front of presidential figures. When Vice President-elect Mike Pence attended the popular Broadway musical in 2016 however, he did not get a personal performance from the cast. But he did get a lecture. After the bows were taken, the cast recognized Pence and thanked him for coming. Then they proceeded to berate him and the Trump administration's bigoted policies. One of the cast members, speaking for the troupe, said, "we are the diverse America who are alarmed and anxious that your new administration will not protect us." He hoped the show inspired Pence to "uphold our American values." In a sense, they asked him to be better.

Pence said he wasn't offended, but Trump jumped to his VP's defense called the show "overrated."

The show remains incredibly popular, with tickets selling out across the country.