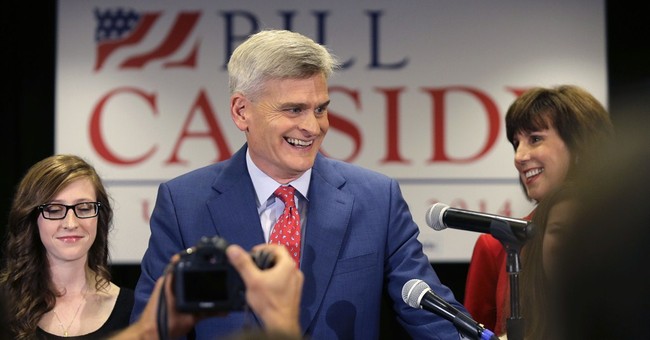 This weekend, I’ll be down in the Bayou State reporting on the last leg of the Senate race between Sen. Mary Landrieu (D-LA) and her GOP opponent Bill Cassidy. Sen. Marco Rubio (R-FL) will be the latest conservative leader to lend his voice to Cassidy and his attempt to unseat the incumbent Democrat.

On the other side of the political fence, Democrats have abandoned Mary Landrieu. No unity rallies appear to be on her schedule, she’s received little to no help from the DSCC or outside groups, and she’s certainly getting no visit from Hillary Clinton this time around. Her campaign headquarters may as well be a ghost town.

Because of her support of Obamacare, Landrieu is also getting hit with a new attack ad linking her to Jonathan Gruber - you know, the Obamacare architect who thinks you're 'stupid.'

Yet, Landrieu is full steam ahead. Recently, she put all her efforts into passing the Keystone XL pipeline, legislation which Rachel Maddow pointed out had been sponsored by Cassidy. Therefore, Landrieu was essentially promoting her opponent’s bill. Those efforts were all for naught, however, as she failed to get the last vote she needed to get it through the Senate.

A new poll released Wednesday shows Landrieu in deep trouble. Like double digit trouble. It’s for reasons like these that Democrats have called for Landrieu to bow out of the race. Landrieu is ignoring them and sticking around for the long haul. “Stubborn” comes to mind.

Will Louisianans elect Cassidy and finally end the Landrieu dynasty? Or will they extend the Democrat’s 18-year reign? We’ll find out December 6th.

Stay tuned for coverage from this Saturday’s unity rally for Bill Cassidy in Kenner, LA, headlined by Sen. Rubio.