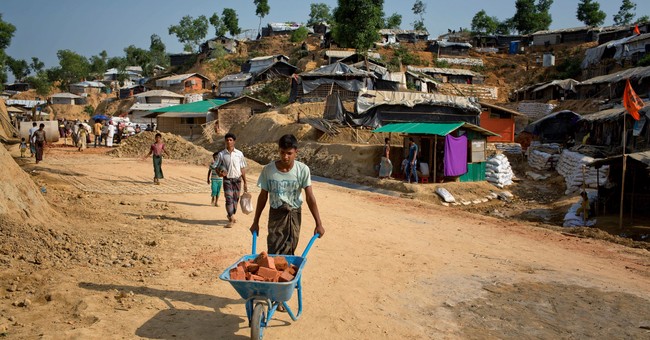 On Tuesday, Secretary of State Mike Pompeo and Ambassador Sam Brownback spoke to press at the State Department to detail the release of its latest report on international religious freedom. During the press conference, Ambassador Brownback took questions from reporters and spoke at length about all the usual suspects that actively deny their citizens’ religious liberty, including North Korea, Communist China, Saudi Arabia, and Myanmar (also known as Burma).

However, when Brownback spoke to journalists about the situation in Myanmar, he did not stop at mentioning the widely-reported persecution of ethnic Rohingya Muslims there. Instead, he also took the time to discuss the plight of the country’s Kachin minority group, which is predominantly Christian. When a reporter from Reuters asked the ambassador about the situation in Myanmar, Brownback described the Kachin people’s situation in stark terms [all transcripts from the State Department, emphasis in bold mine]:

REPORTER: You said you had been to Myanmar and you had raised --

AMBASSADOR BROWNBACK: No, I’ve been to Bangladesh.

REPORTER: Sorry, you’d been to Bangladesh.

REPORTER: And I understand that you had not been given a visa to go into Myanmar. As we know, the USAID administrator has just been there and he got access. But do you think that there have been any kinds of progress made in resolving this issue?

AMBASSADOR BROWNBACK: I had asked for access into Myanmar and to meet with Aung San Suu Kyi or – and to go into northern Rakhine State, where the problems have been most acute, although there’s plenty of problems in various places in Myanmar. And I was denied those accesses. So they might have let me in, but they weren’t allowing me to have the meetings or access to the places I needed to go.

Later during the press conference, Brownback responded to a French reporter’s query about the persecution of Myanmar’s Rohingya population by stressing that the Kachin area was experiencing a similar wave of ethnic cleansing:

REPORTER: Yeah. I just wanted to know, coming back on Burma and the Rohingyas, you say that they are still targeted for their faith. Would you still say that some ethnic cleansing is going on in – now in Burma?

AMBASSADOR BROWNBACK: That ethnic cleansing is going on?

AMBASSADOR BROWNBACK: Yes, yes. I mean, that’s the – Secretary Tillerson had announced the finding of ethnic cleansing, and I believe it’s ethnic cleansing of a religious minority that’s taking place. You continue to see, as I noted, a horrific situation that fortunately has been reported on in Bangladesh of all the refugees coming out, and the international community and the international press has done a great job reporting this.

Unfortunately, now you’re even seeing them step up again in the north, in the Kachin area, and the number of refugees there has increased in recent – in recent weeks as the fighting there has expanded of another ethnic religious minority being pushed out of the country and their normal areas.

Taken together, the ambassador’s comments about the Kachin crisis mark one of the few instances of a major government official condemning the targeting of Myanmar’s Christians in such strong international legal terms. Indeed, Kachin Christians’ persecution at the hands of Buddhist nationalists in Myanmar has largely gone unreported on over the past several years as stories about Rohingya Muslims’ travails have dominated news coverage abroad.

However, in spite of the difficulty of reaching the mountainous areas where Kachins tend to live and the Myanmar military blockade of international aid agencies getting into the area, some intrepid reporters have been able to raise awareness about the Christians’ plight. Earlier this month, The Guardian published a report detailing claims that Myanmar government militias are waging an “invisible war” of “slow genocide” on the Kachins:

That violent pacification is intensifying in Kachin. Since April, more than 6,800 villagers have been forced to flee mortar and heavy weapon attacks. That number adds to the 130,000 Kachin who have been displaced over the decades. Many are stranded in the jungle or trapped in conflict zones. Meanwhile, aid agencies say they are being blocked from providing food and other vitals supplies to civilians trapped in the forest. Blocking aid agencies is a violation of international humanitarian law.

As the Buddhist militias push out the Kachin people from their ancestral homeland, they are not merely violating international laws or committing war crimes – they are also taking prime real estate that hosts numerous amber and jade mines, the output of which could potentially produce billions in income for Myanmar’s government.

While it was good to see the Trump administration continuing its trend of putting increased focus on the persecution of Christians worldwide, it would be even better to see a concrete action plan from the White House on how they plan to fight such abuses in the future. Only time will tell if that development is forthcoming.

The State Department’s latest report on international religious freedom can be found here.