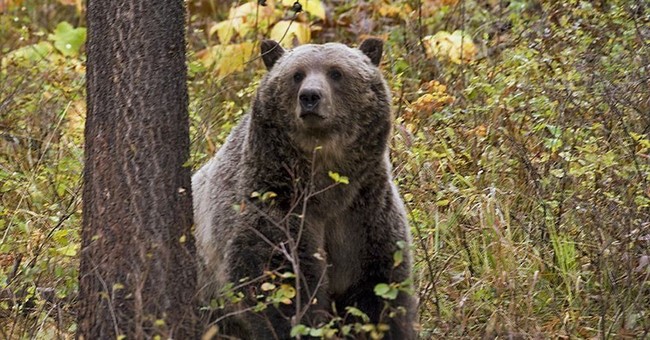 Cody, Wyoming is a small town nestled a short distance from Yellowstone National Park. The town is definitely one of the most pro-gun places in the country. After all, it's home to the Cody Firearms Museum, which houses more than 7,000 firearms from all different eras of American history.

Now, the town is making headlines after a Scott Weber, a local gun store and action house owner, designed and placed a pro-hunting billboard along the side of the road.

But this isn't the first time Weber has utilized billboards to make his pro-gun, pro-hunting stance known. In fact, this is the third in a series of billboards.

Here are the others:

Weber's first billboard was designed to encourage the delisting of the grizzly bear.

"It was very, very effective as it created an international movement and REALLY riled up the anti-hunters," Weber told Townhall via email. "Mission was accomplished as they grizzly was delisted less than a year later."

Interestingly enough, those who were most upset and distraught by the billboard weren't locals. Weber said he received more than 8,000 hate emails, most of which came from Indian Tribes in Arizona and Nevada.

Locals in the area have had encounters with the bears, which have resulted in Wyoming's Game and Fish Department spending over 1 million per year trapping and shooting these grizzlies, Weber said.

"Another reason I put the billboard up was that grizzlies (and wolves) are grossly over-populated and so very over-populated that their range extends over 50 miles from Yellowstone!  I have a ranch on the North Fork about 20 miles from the East Entrance [of Yellowstone] and they are all over here causing all kinds of trouble with domestic stock kills, elk kills and generally getting into trash and dumps as far away as the Cody dump (we had to put an electric fence around the dump)," Weber told Townhall.

Weber's latest billboard was put up in conjunction with the highly-anticipated grizzly bear hunt that was set to take place beginning Sept. 1. Unfortunately, a judge placed a temporary 14-day injunction against the hunt.

"The injunction is only for 15 days and then we will be hunting. Wyoming Game & Fish is ready to adjust the hunting schedule and dates," Weber said. "Note that our present governor and the upcoming governor has denounced the injunction. As hunters, we are used to waiting out these injunctions and 'paper battles' because we KNOW we will prevail and be able to hunt grizzly. The wolf 'court battles' were much the same. A pause here or there and now we’re hunting."

Weber said he plans to put up future billboards, despite their hefty price tag – roughly $10,000 per billboard per year.

"I want to remind people that when they come into Wyoming we hunt, trap, shoot and wear fur! LONG MAY IT LAST!" Weber told Townhall via email.