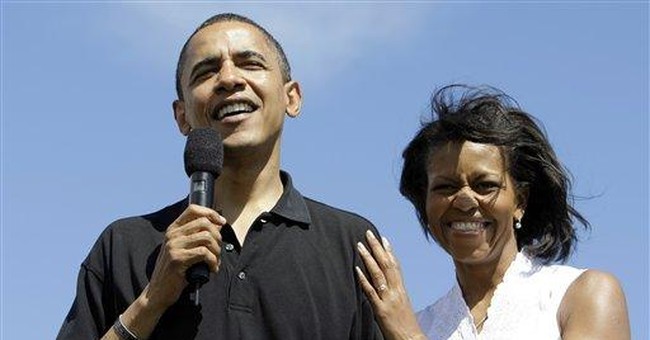 Almost without realizing it, America appears to be on the verge of electing its first black president.

Political observers are in general agreement that, in the normal course of things, 2008 ought to be "a Democratic year." The Republicans have occupied the White House for the last eight years, and controlled Congress as well for the first six of them. In a two-party system like ours, the only serious way of shaking up the political process is to "throw the rascals out" -- or, to put it more gently, to replace the ins with the outs. What's more, the normal accumulation of popular discontents over an eight-year period has left the GOP distinctly vulnerable. The economy is not technically in a recession, but its condition is nothing to brag about. And the war in Iraq, while not going badly in recent months, remains generally unpopular.

So the expectation of most political observers is that the Democrats are likely to win in November -- carrying both Houses of Congress, and probably capturing the White House as well. The only novelty in the situation is the fact that the Democratic presidential choice is black, and, if elected, will be the first African-American ever to sit in the Oval Office.

Does this matter? Americans have gotten pretty sophisticated about racial matters in recent decades, and most of us are thoroughly accustomed to working side-by-side with qualified blacks in just about every aspect of our economy and our political system. Even granting that traces of race consciousness remain -- that, as the late William F. Buckley Jr. once observed, there will never come a time when the average white worker is genuinely unaware that the colleague working next to him is black -- it is safe to say that most of us are not seriously upset by the fact. That truth is a triumph of racial accommodation, and we are right to be proud of it.

But the presidency is something else again. The president, after all, represents all of us, and something on the order of three-quarters of Americans are non-Hispanic white. Would any significant number of white Americans be uneasy on reflecting that our chief national executive wasn't?

My own guess is that this fact would be noticed, and in some cases actively regretted, by a substantial number of white citizens, but that most of them would firmly suppress any impulse to rule out a presidential candidate on that account. They would, in short, think less of themselves if they allowed that consideration to influence their decision.

It goes without saying, however (at least, I hope it does), that this assumes the black candidate in question is thoroughly qualified for the job on nonracial grounds: that he or she has the experience, the temperament and the policies that would make a candidate attractive quite independently of the issue of race.

On that assumption, I see no reason why American voters as a whole would reject a black presidential candidate. There will, of course, be resolute racists who will reject a black candidate out of hand -- just as there are voters, plenty of them, who will not vote for a woman or a Catholic (or a Mormon). But these blocs tend to cancel each other out. Lots of women would actually prefer a female president; lots of Catholics, a Catholic; etc. And a black presidential candidate could certainly count on virtually unanimous support from black voters.

Today, there is one serious contender for the White House who is black: Barack Obama, who certainly appears to be a lock for the Democratic nomination. And polls suggest that he may well go on to win the presidency itself.

If so, I hope -- and expect -- that he will win it because he has convinced a majority of the American electorate that he deserves to: on the basis of his experience in the Illinois Senate and the U.S. Senate, his political policies as these have been (and will continue to be) spelled out, and the personal qualities he has displayed. And if he loses, I devoutly hope it will be because of perceived shortcomings in these respects, and not in the least because he happens to be black.