Manchin: The Last Twitch of a Dead Party

Will Alexander
|
Posted: Dec 24, 2021 12:00 AM
Share   Tweet
The opinions expressed by columnists are their own and do not necessarily represent the views of Townhall.com. 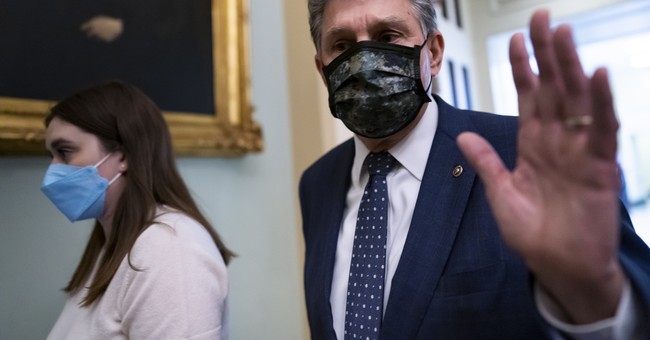 It’s pretty common that when a sick person is dying, especially from a psychiatric disorder, they get spurts of life that can fool you into believing they’re getting back to normal.  But what looks like signs of life can be deceiving.  When sickness declines to a slow death, terminal lucidity, agonal breathing, and the Lazarus reflex become signs that death is imminent.

Terminal lucidity, first described in 1833, is an unexpected return of mental clarity to a person who’s been gone, sometimes, for years.  Agonal breathing looks like real breathing but are the last gasps of a dying brain – a sign that the heart has stopped beating.  The Lazarus reflex comes when artificial ventilation has been turned off and the person is declared brain dead.  They’re able to slowly raise and lower their arms.  Their knee jerks if you tap it with a rubber reflex hammer.  And their face, toes, and legs twitch.

Democrat leaders have long pulled the plug on the old party.  It’s dead.  The hopeful twitch we’re seeing with Sen. Joe Manchin is just a Lazarus reflex.  Woke blood now flows through the party’s veins.   They’ve been infiltrating that sick party for years but, with Biden’s fraudulent election, 2020 was their revolutionary year. They’ve overtaken the party’s disembodied corpse to kill American traditions, dismantle American institutions, and choke off that wellspring of vitality and ingenuity in the country’s soul that we call “the American Spirit.”

It’s working, for now.  In the long run?  Impossible.  America is fighting the strangest war of its history: We just want to get back to normal.  But leftists won’t just let that happen because they’re intoxicated from the smell of blood in the water, and they’re hooked now.  They’re seated at centers of power in every American institution and, for the first time, they feel alive.

Consider Sen. Richard Blumenthal, the man who tried to defang the Insurrection Act of 1807 to keep Trump from stopping rioting and looting in 2020.  Blumenthal spoke at a recruiting event for outright communists recently, then denied that he knew about it.  But it’s all on tape.  Lisa Bergmann and Ben McManus, who invited him, emceed the event.

“If you are not already part of the Communist Party,” Bergmann said just before introducing Blumenthal, we invite you to participate and contribute and join.”

So as the party’s fringe are let loose to demand the moon (or else) and to spark fires of hatred and division all over the country, Democrats are actively, willfully, and strategically brain dead.  As Americans lose their freedoms, their livelihoods, their country, and their lives by the tens of thousands, calloused Democrat leaders – in a Faustian bargain for money, popularity, and power – give aid and comfort to socialists, Marxists, communists, globalists, and useful idiots who are committed to making the country unrecognizable.  In their eyes, like all tyrants, the inhumane means are justified by the superhuman end, as journalist Walter Lippmann once put it.  “… the harder they try to make earth into heaven,” he wrote, “the more they make it a hell.”

This is what the 2,100-page, $2 trillion Build Back Better monstrosity is all about: A shortcut, at the nation’s expense, to create their version of “heaven” on Earth – by any means necessary.  They advertised the cost at $2 trillion but the CBO calculated the real cost at $4.5 trillion. Bernie Sanders wanted $6 trillion.

“My Democratic colleagues in Washington are determined to dramatically reshape our society in a way that leaves our country even more vulnerable to the threats we face,” Manchin wrote, Dec. 19.  “I cannot take that risk with a staggering debt of more than $29 trillion and inflation taxes that are real and harmful to every hard-working American at the gasoline pumps, grocery stores and utility bills with no end in sight.”

Lenard Larry McKelvey (a.k.a. “Charlamagne Tha God”) to Kamala Harris: “I want to know who the real president of this country is.  Is it Joe Biden or Joe Manchin?”

Bette Midler: “He sold us out.  He wants us all to be just like his state, West Virginia.  Poor, illiterate and strung out.”

Ilhan Omar: “We all knew that Senator Manchin couldn’t be trusted. … The excuses that he just made, I think, are complete bulls**t.”

Manchin did not down.  Major kudos.  But it’s not going to be enough to stop the political Frankenstein his party has created.

Republicans fall short, too.  Even the ones who fight.  With the fraudulent election, the COVID mandates, the jailing of political opponents, the Afghanistan debacle, inflation, illegal immigration and massive spending, gentile Republicans have been caught flat-footed by the barbaric audacity of their opponents.

They’ve set America on fire.  This is an emergency!  America needs political firefighters with sirens screaming and air horns blaring who run lights, speed through stop signs, and drive in the middle of roads through heavy traffic to gush as much water as needed to put the fire out.  It’s spreading.

Unfortunately, Joe Manchin and the Republicans are hitchhiking to the emergency, politely abiding by traffic laws, then arriving to the fire – too late – only to pee on the inferno.  Kudos.  Right idea.  But when you’re dealing with psychopathic pyromaniacs, it won’t get the job done.

They need to realize that the old Democrat party is dead.  Want proof?  Joe Biden.  The death rattles are deafening.  He’s the living, breathing embodiment of what the party has become: a hollow, desperate shell of itself who’s transformed the party into a Trojan Horse filled with rabid anti-American socialists chomping at the bit to destroy the country as we know it.

I have no clue how a man like Manchin can stay in such a brain dead party.