Illegal Immigration Is A Powder Keg In LA

Will Alexander
|
Posted: Apr 24, 2019 9:05 AM
Share   Tweet
The opinions expressed by columnists are their own and do not necessarily represent the views of Townhall.com. 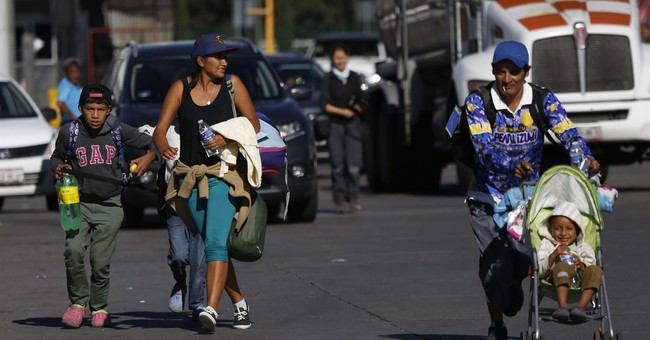 My oldest daughter lives in Los Angeles, a short walk from MacArthur Park.  She’s not political.  Not that politics is bad, but the practicalities of surviving in a tough city requires her to be no-nonsense about what’s important to her success.

I’m convinced she knows nothing about Beto, Bernie, Biden, Booker or Buttigieg. But living at ground zero of one of the most sanctimonious of sanctuary cities, she knows more about the perils of illegal immigration than all of them combined.  Politics was dumped at her doorstep and, like many, she’s cracking under the weight.

Her message? “The situation in LA is unbearable.”

Far outside the political incubators of Nancy Pelosi, Kamala Harris, Eric Swalwell, Adam Schiff and Maxine Waters – all of them California lawmakers – my daughter bears the brunt of the raw political debris created by deeply devious politicians who excrete pious lies about how much they care about minorities.

In utter frustration, my daughter texted me a video that she filmed near her apartment.  I was shocked at what I saw: Cluster after cluster of illegals lined along public streets selling anything they could find, spread over raggedy blankets or anything else they could use to form a boundary for their slipshod sidewalk stores.

“They are above the law,” she wrote.  “How can you sell so much food on the street without a permit? Without the grading system?   I didn’t know you could have a business and not pay taxes. They're spreading, too.  It used to be just several blocks but if you turn the corner, they’re further down than ever before.  Both sides of the street. There are so many of them. This!  Is!  Their!   Country!!! Lol.”

My daughter’s video was strikingly similar to one shot by LA resident Shirley Husar, CEO of Urban Game Changer, near LA’s MacArthur Park last year.  The park, renamed after Gen. Douglas MacArthur in the 1940s, was where Jimmy Webb composed the song “MacArthur Park” that Richard Harris recorded in 1968.

“MacArthur Park is melting in the dark,” Harris sang. Today, it’s “melting in the light” as it has become quasi-home to an influx of illegals who live and sleep there.

Husar’s video showed a woman using a shopping cart wrapped in aluminum foil to cook food.  A man sold heaps of crawdads stuffed inside a baby carriage.  No ice.   No refrigeration.  Another man sold piles of chili peppers sprawled on the bare sidewalk under a rickety table.  Others sold bootleg CDs, phone chargers, hats and stuffed animals.

“I really believe that they skim from the stores that they work in, and then they bring them down here,” Husar said.  “This is a public sidewalk.  This happens every weekend.  I call this an underground economic operational system where they pay cash, they don’t pay taxes, they don’t pay for the space on the ground, they don’t pay sanitation [fees] or licensing.”

She asked eight policemen chatting across the street how they could stand by while laws were being broken.

“The mayor says it’s legal,” one policeman said.  That mayor is Eric Garcetti, a visceral Trump-hater who vowed to keep defending his sanctuary policy after the president said that defying federal law would cost these cities federal funding.

“Slashing funds for first-responders, for our port and airport, for counterterrorism, crime-fighting and community-building serves no one,” Garcetti said.  “Not this city, not the federal government, not the American people.”

That kind of Trojan Horse rhetoric falls on deaf ears for the people who are stuck in the Twilight Zone of illegal immigration.  They have no political connections.  They have no voice.  They’re unsophisticated in the twisted political language that defies the realities on the ground. They are placated, marginalized and ignored, and they’re growing angrier as they realize that no one speaks for them.

No one except Trump.

One black man wearing a MAGA cap and a red Trump-Pence T-Shirt told county leaders that he’s ready to take the law into his own hands.

“Make California Great Again!” he said in a County of Los Angeles Board of Supervisors meeting about SB 54, California’s sanctuary state bill.  “We gonna handle this!  If you guys don’t, I will!  And if Mr. Trump would have lost, I would have organized some brothers, and we [would] put all your asses under … citizens arrest (pointing to a group of pro-illegal immigrant protesters).”

At a different meeting about the bill, long-time activist Lupe Moreno offered deeply emotional comments about the murder victims of illegal immigrants.

“Our beautiful children have been sacrificed at the altars of elected officials and non-profits; as we could see how many non-profits are making money off of our dead children ... We want you to stop this now!  Now!  I have it on good authority that our side wins because you have weeping mothers, not only in California, but throughout the United States.  Stop trying to blur the difference between legal and illegal.  There’s a big difference!  We’re Americans!”

Ted Hayes, an articulate Civil Rights homeless activist in Los Angeles has been speaking out for years against the perils of illegal immigration, especially on black people.

“I don’t blame the people,” he said.  “I blame the politicians for failing to protect us.”

Unlike Hayes, I do blame illegals for knowingly breaking laws to pursue a better life at the expense of others.  Politicians hand them the keys to someone’s house against the owner’s will, and illegals gladly rush in to help themselves while police sit back and do nothing.  Politicians have fortified the plight of illegals with police power.

Like my daughter, LA residents who once recoiled at the noise of today’s politics are finding themselves at city halls, watching political programs and chiming in on social media because, for them, this issue is dire and getting worse.  And growing numbers of these minorities are MAGA-hat-wearing Trumpsters.

Partly to spite Trump, California politicians have forced illegal immigration down the throats of their most vulnerable citizens.  And while they clippity-clop around the country promising to bring La-La Land to the entire nation, they’re telling their most powerless citizens to “shut up and get over it” while they make them second-class citizens at the taxpayer's expense.

From a safe distance, California politicians are playing with matches on top of a political powder keg.   Chatting with my daughter from ground zero, you get the feeling that it wouldn’t take much for things to explode, not only in LA but across the nation.