Wayne Allyn Root
|
Posted: Feb 23, 2016 12:01 AM
Share   Tweet
The opinions expressed by columnists are their own and do not necessarily represent the views of Townhall.com. 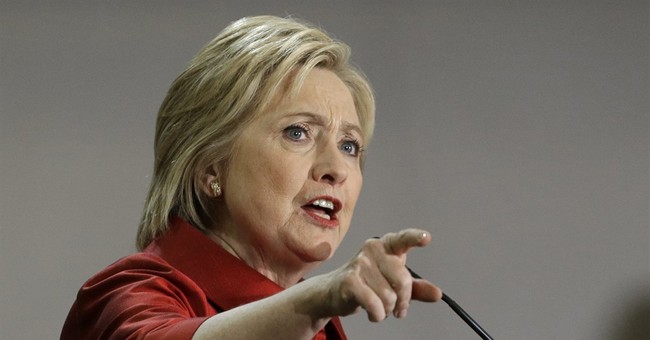 I spent the weekend listening to national media commentators (so called “experts”) gloat over Hillary's "decisive victory" in Nevada and how she is now on firm footing to win the Democratic presidential nomination. The media is committing fraud- you are being lied to.

Hillary’s razor thin Nevada victory wasn’t a “decisive victory.” It was an embarrassment that required spending millions of dollars to garner a pathetic 6,316 votesin an anemic turnout.

“Decisive victory?” The national media is committing fraud. Hillary once led Bernie Sanders by 40 points in Nevada. She led by 25 points less than 30 days ago.She won by 5 points.

But more importantly, the turnout was embarrassing, especially considering the millions spent on TV advertising. Hillary not only spent millions to draw a measly 6000 votes, overall turnout wasdown one third from 2008.

And she lost by 70 pointsamong voters who voted based on “honesty.”

Shouldn’t the national media be reporting how Hillary’s weak, unimpressive, embarrassing victory was achieved? The American people have a right to know there was nothing fair, decisive or ethical about it.

Now let’s look closely at how she achieved her razor-thin, embarassing victory. This is the part where serious questions should be asked. But of course we no longer have a professional unbiased media. We are living in a "Banana Republic" where the media is bought, paid for and in the bag for Hillary Clinton.

Here’s the part missing from mainstream media reporting- Hillary scored her win in Nevada by changing the rules at the last minute and playing "dirty politics" to avoid a humiliating defeat that might have sunk her entire presidential campaign.

Hillary was losing with days to go. Her team was in panic mode. Remember who this is- Hillary is the most famous woman in the history of politics. Yet she was going down to a humiliating defeat to unknown Vermont socialist kook Bernie Sanders. Her entire dream to win the presidency was in danger of imploding. Enter Nevada Senator Harry Reid.

Reid “fixed” the results for Hillary by twisting the arms of casino and union bosses.

Why isn’t the national media reporting this? She needed pure corruption, intimidation and manipulation to squeak out an unimpressive win in Nevada. Reid saw Hillary about to lose Nevada and with it, her entire campaign. So in the days before the caucus he called casino bosses of every Vegas Strip casino and twisted their arms to get them to give union employees three hours off- with pay- to vote in the caucus.

This happened at the last second to deliver victory for Hillary. This was in full cooperation with union bosses who supported one candidate. Everyone understood clearly who this move benefited. It wasn’t Bernie. That got Hillary a few hundred extra votes and put her over the top in Nevada. That’s how she achieved her “decisive victory.”

After spending millions of dollars on TV ads, she needed union and casino bosses to basically order their union employees to take half their day off, and pay them to vote for Hillary.

A few hundred union votes at six Democratic caucus sites inside Strip casinos saved her entire run for the White House. Now the media says she is in a comfortable lead and in position to put away the nomination.

America’s voters have a right to know the truth. If Hillary's actions weren't illegal, they sure smell unethical. Why would casino bosses cave to pressure from Harry Reid and Hillary Clinton? Keep in mind, all of this happened at the last minute with Harry Reid twisting the arms of casino bosses. This was allreported publiclyby liberal journalists, like Jon Ralston, NBC News Analyst. What did Harry Reid and Hillary promise them? Isn’t this a case of “pay for play?”

I’d also ask if these actions violated SEC law. Most of the Vegas Strip hotels are publicly traded companies. Not only did they violate the trust of their paying hotel guests by providing less than optimal service (with so many employees off the job on a busy weekend in Vegas), but I believe a strong case could be made they committed fraud against their shareholders. If I own stock in a public company, casino bosses have no right to use shareholder money to pay employees to take the afternoon off to vote for the candidate supported by union bosses. That crosses into the area of theft of shareholder value.

The real question is what could possibly be in it for the unions and casino bosses? Did Hillary agree to pay back this massive favor with favorable actions toward Las Vegas casinos once she’s president? Isn’t that a bribe? Hasn’t a crime been committed? Of course everyone involved will deny any deal was offered or accepted.

Do other companies provide paid time off to vote? Do other companies get caucus sites placed inside their building to enable employees to vote with ease? It’s sure not a privilege I’ve ever experienced. Why should union employees receive something of value that I don’t, in order to stuff the ballot box for Hillary Clinton? What did she agree to give to the union and the casino bosses in return for this favor?

The mainstream media doesn't understand the popularity of Donald Trump. This is precisely why voters like Trump. Because they are sick of
"business as usual." They are sick of backroom deals. They are sick of corruption and bribery dominating elections.

And this is why Trump is booed at GOP Presidential debates by donors, lobbyists and CEO’s. Because he can’t be bought or bribed. Because under future President Donald Trump America isn’t for sale.

Unfortunately under President Hillary Clinton it’s already been sold. She sold her soul to the devil, Harry Reid and the Vegas Strip casinos for a lousy 6,316 votes.