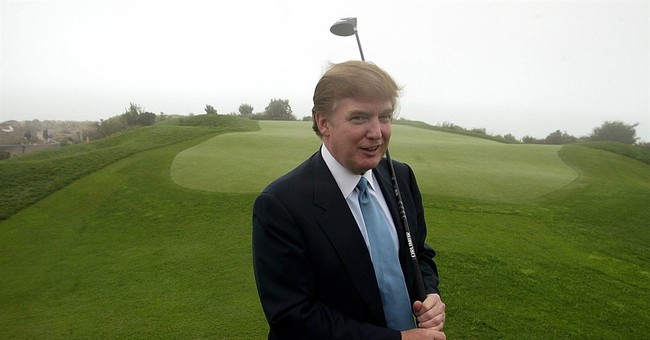 I'm sure the top political consultants and experts in the world are all advising Donald Trump to "tone it down" and "act Presidential" at tonight's first GOP Presidential debate. They're telling him not to be a bomb thrower…not to offend anyone…not to be controversial…not to respond to fire with fire. They're telling him to play down his bigger-than-life personality. I'm sure they want him to play nice…and show his willingness to compromise.

This fellow New Yorker and big-mouthed businessman and politician has a response to that professional advice: Tell them to go to hell!

My advice should matter, simply because I've been there before. And my test run (on a much smaller scale) proves all the experts are wrong.

America wants a Bullworth. America wants a politician tells the truth…that tells it like it is…that offends…that isn't afraid to hurt feelings…who tools the dice…who throws caution and political correctness to the wind. In short Trump is wining because he is the opposite of what the experts want him to become.

Once upon a time, a bombastic, controversial, confident, outspoken, opinionated, tell-it-like-it-is, bigger than life New York businessman ran for President. He was a complete political newcomer and novice. He was an Ivy League educated, but with a cocky New York street fighter attitude. He knew business, the economy and how to create jobs. He despised the socialist policies of Obama and had the chutzpah and audacity to question Obama’s college background. He warned America that Obama would badly damage the economy.

He was also known for his success in the gaming industry and reality television. He had no filter. His personality was that of a bull in a china shop. You might describe him as RELENTLESS. He ran his campaign almost by himself. He wrote his own policies and speeches.

And no one thought he had a snowball's chance in hell of winning his party's nomination.

No, I’m not talking about Donald Trump. The guy I’m talking about ran for the Libertarian Presidential nomination in 2008. His name was Wayne Allyn Root. That’s me. And despite no background or name recognition in national politics of any kind… I parlayed all of those Trump-like personality traits into the Libertarian Vice Presidential nomination.

Please understand I would never describe myself anything close to Donald Trump. Because there is only one Donald Trump. But the similarities really are quite funny (and maybe even a little bizarre).

I was told by experts, consultants, party insiders and delegates at our national convention that I was "too much." That I had to "tone it down." That my bigger than life, in-your-face New York personality would turn people off. That my political incorrectness and blunt, loud, emotional, opinionated style would offend Libertarians- who by nature are shy, humble and intellectual. Unless I changed, I had no chance. I heard that advice a thousand times or more.

They were all wrong. Are you listening Donald?

Yes, I did it on a much smaller scale (third party Presidential run), but I also started in a much worse position. I was not a household name. I didn't have a #1 rated reality TV show. I didn't have a billion dollars to spend. I was a successful entrepreneur, but not a billionaire business mogul. The experts gave me no chance to win the nomination. Zero. Zip. Nada.

But none of that mattered. The good news for Donald Trump is...with all those similar Trump-like personality traits, I went out and won my party's Vice Presidential nomination in my first try at national political office.

I beat out a United States Senator (Mike Gravel) and came within a whisker of beating a 4-term US Congressman who led the impeachment of President Clinton (Bob Barr). Then I wound up on the Presidential ticket and joined Bob Barr the next day on Fox News (for the first time in my life). The experts were shocked.

What were the the keys to my political success? They were pretty similar to what Trump is doing today. First I was relentless. You might expect that from the author of "The Power of Relentless." I never let anyone stop me, slow me, or discourage me. I never worried about offending anyone- I just told the truth and let the chips fall where they may. I just kept fighting- no matter what the critics said…no matter what the media said…no matter what the experts and political consultants said. I was just me.

Secondly, just like Trump, my lifetime of experience in front of television cameras gave me a huge edge. Until the night of the Libertarian Presidential debate on national TV, I was a complete unknown. But I had an ace in the hole. I knew how to stand out in a crowd on national TV, because I’d done it my whole life- from host of five shows on CNBC (then known as Financial News Network), to star of countless TV infomercials, to Executive Producer and host of my own reality television show.

Then I went out and dominated the Libertarian presidential debate. I hit a grand slam. Like Trump, I shared the stage with a lot of candidates. With so many candidates on one stage, and so little time to make an impression, what matters most is memorable lines. No one remembers facts. They remember bigger-than-life personality. If the viewers remember a few funny or impactful one-liners, you won! And trust me, I delivered a bunch of zingers everyone was talking after the debate. And so, my life changed on that stage.

So what will happen at that debate tonight in Cleveland? No one knows. Anything can happen on that stage. But I’ll bet on Donald. He has great instincts. I’d bet when the camera lights go on, Donald will outshine the competition.

Understanding Trump's background and personality, I think it's more than likely he'll hit a grand slam with a few memorable lines everyone will be talking about the next day. Remember…Trump is the one with the advantage. There will be 9 nervous men who have never played for stakes this high on national TV. And they’ll be up against a television showman and media superstar who loves the limelight, loves the media, loves TV cameras, loves pressure.

My prediction? Trump will produce the most memorable moments of the night. In a televised debate that's what matters. I'm betting Trump will cause conservatives watching at home to give standing ovations in front of their television sets. Once that happens with tens of millions watching, the narrative is set. This is Donald's chance to make a lasting impression. After that, even the media won't be able to discredit Trump. He'll be seen as a legitimate contender and potential future President of the United States.

How do I know? Because I’ve seen it all before.

So here’s my advice to Donald Trump...

Ignore the experts and consultants. Go big, or go home! Be yourself. Be loud. Be colorful. Be politically incorrect. Speak the truth. Let it fly- and let the chips fall where they may. Be exactly what you were born to be- a bigger than life political disruptor. A breath of fresh air. A teller of the truth some people don’t want to hear, but we all need to hear.

One more thing- be RELENTLESS. Never stop believing. Never stop fighting. Never worry about offending. Just tell the truth and be you.

I'll be rooting for you! So will much of America. Good luck Donald.