A Constitutional Right to Literacy

Walter E. Williams
|
Posted: Oct 12, 2016 12:01 AM
Share   Tweet
The opinions expressed by columnists are their own and do not necessarily represent the views of Townhall.com. 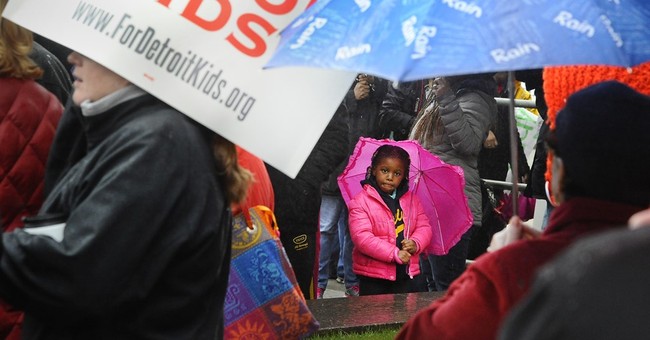 Trending
Detroit school students, represented by the Los Angeles-based public interest firm Public Counsel, filed suit last month against the state of Michigan, claiming a legal right to literacy based on the 14th Amendment to the Constitution. Ninety-three percent of Detroit's predominantly black public school eighth-graders are not proficient in reading, and 96 percent are not proficient in mathematics. According to the lawsuit, "decades of State disinvestment in and deliberate indifference to Detroit schools have denied Plaintiff schoolchildren access to the most basic building block of education: literacy."

In terms of per-pupil expenditures, the state does not treat Detroit public school students any differently than it does other students. According to the Michigan Department of Education, the Detroit school district ranks 50th in state spending, at $13,743 per pupil. This is out of 841 total districts. That puts Detroit schools in the top 6 percent of per-pupil expenditures in the state. Discrimination in school expenditures cannot explain poor educational outcomes for black students in Detroit or anywhere else in the nation. Let's look at routinely ignored educational impediments in Detroit and elsewhere.

Annie Ellington, director of the Detroit Youth Violence Prevention Initiative, reported that 87 percent of the 1,301 Detroit public school students interviewed in a survey last year knew someone who had been killed, disabled or wounded by gun violence. According to an article published by the American Psychological Association, 80 percent of teachers surveyed nationally in 2011 had been victimized at school at least once during that school year or the prior year. Detroit public schools are plagued with the same problems of violence faced by other predominately black schools in other cities.

In Baltimore, each school day in 2010, an average of four teachers and staff were assaulted. In February 2014, The Baltimore Sun reported that more than 300 Baltimore school staff members had filed workers' compensation claims during the previous fiscal year because of injuries received through assaults or altercations on the job. A 1999 Michigan law requires school districts to expel any student in sixth grade or above who physically assaults a school employee. The Lansing Board of Education ignored the law and refused to expel four students for throwing chairs at an employee, slapping a teacher and punching another in the face. It took a Michigan Supreme Court ruling to get the board to enforce the law. The court said the law was enacted "specifically (to) protect teachers from assault and to assist them in more effectively performing their jobs."

Colin Flaherty, author of "Don't Make the Black Kids Angry," has compiled news stories and videos that show how black students target teachers for violence. He discusses some of it in his Jan. 12, 2015, American Thinker article, titled "Documented: Black Students Target Teachers for Violence" (http://tinyurl.com/l67857g). As a result of school violence and other problems, many teachers quit when June rolls around. Every year, Detroit loses about 5 percent of its teaching positions (135 teachers). According to a Detroit schools representative, substitutes, principals and other staffers must cover classes, a situation not unique to Detroit (http://tinyurl.com/p9sf2d9). In California, signing bonuses of $20,000, "combat pay," aren't enough to prevent teachers from leaving altogether or seeking out less violent schools.

The departments of Education and Justice have launched a campaign against disproportionate minority discipline rates, which show up in virtually every school district with significant numbers of black and Hispanic students. The possibility that students' behavior, not educators' racism, drives those rates lies outside the Obama administration's conceptual universe. Black people ought to heed the sentiments of Aaron Benner, a black teacher in a St. Paul, Minnesota, school who abhors the idea of different behavioral standards for black students. He says: "They're trying to pull one over on us. Black folks are drinking the Kool-Aid; this 'let-them-clown' philosophy could have been devised by the KKK." Personally, I can't think of a more racist argument than one that holds that disruptive, rude behavior and foul language are a part of black culture.

Here's my prediction: If the Michigan lawsuit is successful, it will line the pockets of Detroit's teaching establishment and do absolutely nothing for black academic achievement.