Walter E. Williams
|
Posted: Jan 13, 2016 12:01 AM
Share   Tweet
The opinions expressed by columnists are their own and do not necessarily represent the views of Townhall.com. 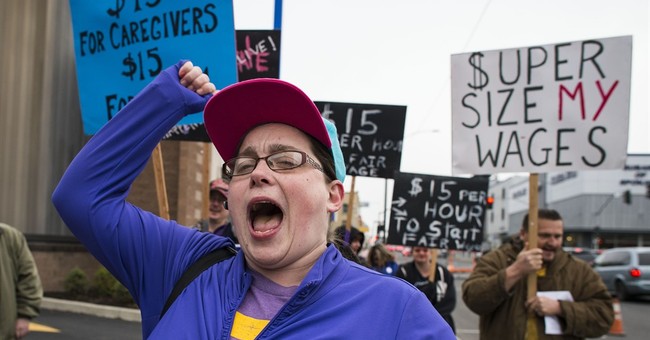 Michael Hiltzik, a columnist and Los Angeles Times reporter, wrote an article titled "Does a minimum wage raise hurt workers? Economists say: We don't know." Uncertain was his conclusion from a poll conducted by the Initiative on Global Markets, at the University of Chicago's Booth School of Business, of 42 nationally ranked economists on the question of whether raising the federal minimum wage to $15 over the next five years would reduce employment opportunities for low-wage workers.

The Senate Budget Committee's blog says, "Top Economists Are Backing Sen. Bernie Sanders on Establishing a $15 an Hour Minimum Wage." It lists the names of 210 economists who call for increasing the federal minimum wage. The petition starts off, "We, the undersigned professional economists, favor an increase in the federal minimum wage to $15 an hour as of 2020." The petition ends with this: "In short, raising the federal minimum to $15 an hour by 2020 will be an effective means of improving living standards for low-wage workers and their families and will help stabilize the economy. The costs to other groups in society will be modest and readily absorbed."

The people who are harmed by an increase in the minimum wage are low-skilled workers. Try this question to economists who argue against the unemployment effect of raising the minimum wage: Is it likely that an employer would find it in his interests to pay a worker $15 an hour when that worker has skills that enable him to produce only $5 worth of value an hour to the employer's output? Unlike my fellow economists who might argue to the contrary, I would say that most employers would view hiring such a worker as a losing economic proposition, but they might hire him at $5 an hour. Thus, one effect of the minimum wage law is that of discrimination against the employment of low-skilled workers.

In our society, the least skilled people are youths, who lack the skills, maturity and experience of adults. Black youths not only share these handicaps but have attended grossly inferior schools and live in unstable household environments. That means higher minimum wages will have the greatest unemployment effect on youths, particularly black youths.

A minimum wage not only discriminates against low-skilled workers but also is one of the most effective tools in the arsenal of racists. Our nation's first minimum wage came in the form of the Davis-Bacon Act of 1931, which sets minimum wages on federally financed or assisted construction projects. During the legislative debates, racist intents were obvious. Rep. John Cochran, D-Mo., said he had "received numerous complaints in recent months about Southern contractors employing low-paid colored mechanics getting work and bringing the employees from the South." Rep. Miles Allgood, D-Ala., complained: "That contractor has cheap colored labor that he transports, and he puts them in cabins, and it is labor of that sort that is in competition with white labor throughout the country." Rep. William Upshaw, D-Ga., complained of the "superabundance or large aggregation of Negro labor."

During South Africa's apartheid era, the secretary of its avowedly racist Building Workers' Union, Gert Beetge, said, "There is no job reservation left in the building industry, and in the circumstances, I support the rate for the job (minimum wage) as the second-best way of protecting our white artisans." The South African Economic and Wage Commission of 1925 reported that "while definite exclusion of the Natives from the more remunerative fields of employment by law has not been urged upon us, the same result would follow a certain use of the powers of the Wage Board under the Wage Act of 1925, or of other wage-fixing legislation. The method would be to fix a minimum rate for an occupation or craft so high that no Native would be likely to be employed."

It is incompetence or dishonesty for my fellow economists to deny these two effects of minimum wages: discrimination against employment of low-skilled labor and the lowering of the cost of racial discrimination.