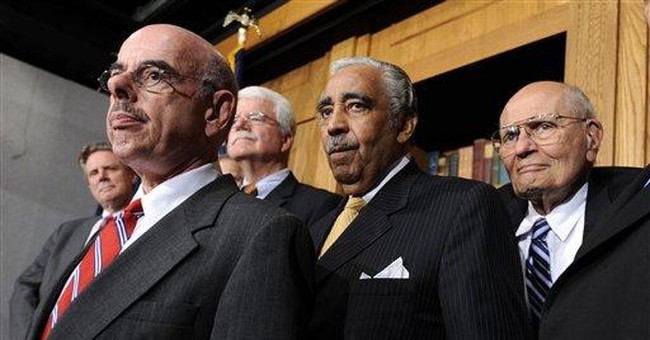 Here's what I wrote in last year's column titled "Global Warming Rope-a-Dope" (12/24/2008): "Once laws are written, they are very difficult, if not impossible, to repeal. If a time would ever come when the permafrost returns to northern U.S., as far south as New Jersey as it once did, it's not inconceivable that Congress, caught in the grip of the global warming zealots, would keep all the laws on the books they wrote in the name of fighting global warming. Personally, I would not put it past them to write more." On June 28, 2009, the House of Representatives, by a narrow margin (219-212), passed the Waxman-Markey bill. The so-called "cap and trade" bill has been sold as a system for cutting greenhouse gas emissions in the struggle against global warming. There's a full-court press on the U.S. Senate to pass its version of "cap and trade."

"Cap and trade" is first a massive indirect tax on the American people and hence another source of revenue for Congress. More importantly "cap and trade" is just about the most effective tool for controlling most economic activity short of openly declaring ourselves a communist nation and it's a radical environmentalist's dream come true.

So why the rush and the press on the Senate? Increasing evidence is emerging that far from there being global warming, the Earth has been cooling and has been doing so for 10 years. Prominent atmospheric scientists have recently sent a letter to Congress saying, "You are being deceived about global warming. ... The Earth has been cooling for ten years. ... The present cooling was not predicted by the alarmists' computer models." Last March, more than 700 international scientists went on record dissenting over manmade global warming claims. About 31,500 American scientists, including 9,029 with Ph.D.s, have signed a petition, that in part reads, "There is no convincing scientific evidence that human release of carbon dioxide, methane or other greenhouse gases is causing or will, in the foreseeable future, cause catastrophic heating of the Earth's atmosphere and disruption of the Earth's climate."

The Obama administration's EPA sees the increasing evidence against global warming as a threat to their agenda and has taken desperate measures. About a week before the House vote on "cap and trade," the Washington, D.C.-based Competitive Enterprise Institute (CEI) released some EPA e-mails, demonstrating that an internal report by Alan Carlin, a 35-year career EPA analyst, criticizing EPA's position on global warming, had been squelched for political reasons. One of the e-mails is from Dr. Al McGartland, director of the EPA's National Center for Environmental Economics reads, "The administrator and administration has decided to move forward on endangerment, and your comments do not help the legal or policy case for this decision. ... I can see only one impact of your comments given where we are in the process, and that would be a very negative impact on our office."

The Competitive Enterprise Institute summarizes Dr. Carlin's report saying, "(T)hat EPA, by adopting the United Nations' 2007 'Fourth Assessment' report, is relying on outdated research and is ignoring major new developments. Those developments include a continued decline in global temperatures, a new consensus that future hurricanes will not be more frequent or intense, and new findings that water vapor will moderate, rather than exacerbate, temperature. "New data also indicate that ocean cycles are probably the most important single factor in explaining temperature fluctuations, though solar cycles may play a role as well, and that reliable satellite data undercut the likelihood of endangerment from greenhouse gases."