Victor Davis Hanson
|
Posted: Apr 18, 2019 12:01 AM
Share   Tweet
The opinions expressed by columnists are their own and do not necessarily represent the views of Townhall.com. 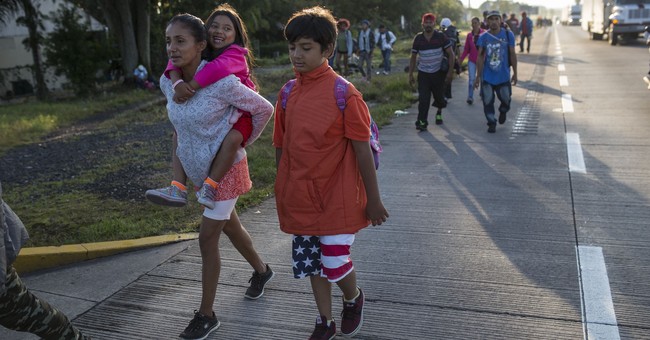 Economist Herbert Stein's old adage -- "If something cannot go on forever, it will stop" -- still holds.

There are currently somewhere from 11 million to 15 million immigrants living in the United States without legal authorization. Last month, nearly 100,000 people were apprehended or turned away while trying to illegally cross the southern border. Some experts suggest that at least that number made it across without arrest. At that rate, the United States would be gaining a fairly large city of undocumented arrivals each month.

Most of the people who enter the United States illegally arrive without fluency in English, a high-school diploma, competitive job skills or money. The majority will require support subsidies, and collectively they will require increased legal and law-enforcement investments.

At some point, American social services will be so taxed that the system will be rendered dysfunctional -- as is already occurring in areas of the American Southwest. Or, some regions of America will so resemble the countries undocumented immigrants abandoned that there will be little point in heading north.

Either way, the current border chaos will find its own self-correcting mechanisms, even if that means there will be no border at all -- or northern Mexico and the southern United States will become indistinguishable.

Currently, the national debt is $22 trillion and growing at a rate of nearly $1 trillion a year due to staggering annual budget deficits. The George W. Bush and Barack Obama administrations roughly doubled the debt they inherited, and the Donald Trump administration may be on schedule to do the same.

More importantly, the national debt is now over 100 percent of the gross domestic product.

Presidents and Congress like to spend and to spread money to voters. They fear politically suicidal recessions if they cut back. But over the last 20 years, the government has mostly exhausted traditional economic stimuli such as larger budget deficits, near-zero real interest rates and expansion of the money supply.

Common sense would dictate that in the present boom cycle, the president and Congress would get together to reduce discretionary spending and at least curb the growth of entitlements before we enter the next inevitable recession.

Otherwise, history outlines a lot of near-automatic solutions to unsustainable government borrowing. Sometimes massive inflation ensues, as the government is forced to print currency to pay bondholders with play money, eroding the assets of those who are thrifty and put cash savings in the bank.

Sometimes more desperate governments simply renounce their obligations to bondholders, on the principle that such creditors are well off anyway and can afford the losses.

Another solution has been simply to slash defense spending and entitlements, and hope that neither a war abroad nor civil strife at home breaks out.

The common result of all these draconian solutions is a general distrust of government. The big fear is an ensuing Venezuela-like nightmare, with shortages, violence, black markets, mass flight, corruption and hatred of elected officials.

For history's rare multiracial and multiethnic republics, an "e pluribus unum" cohesion is essential. Each particular tribe must owe greater allegiance to the commonwealth than to those who superficially look or worship alike.

Yet over the last 20 years we have deprecated "unity" and championed "diversity." Americans are being urged by popular culture, universities, schools and government to emphasize their innate differences rather than their common similarities.

Sometimes the strained effort turns comical. Some hyphenate or add accents or foreign pronunciations to their names. Others fabricate phony ethnic pedigrees in hopes of gaining an edge in job-seeking or admissions.

The common theme is to be anything other than just normal Americans for whom race, gender and ethnicity are incidental rather than essential to their character.

But unchecked tribalism historically leads to nihilism. Meritocracy is abandoned as bureaucrats select their own rather than the best-qualified. A Tower of Babel chaos ensues as the common language is replaced by myriad local tongues, in the fashion of fifth century imperial Rome. Class differences are subordinated to tribal animosities. Almost every contentious issue is distilled into racial or ethnic victims and victimizers.

History always offers guidance to the eventual end game when people are unwilling to give up their chauvinism. Vicious tribal war can break out as in contemporary Syria. The nation can fragment into ethnic enclaves as seen in the Balkans. Or factions can stake out regional no-go zones of power as we seen in Iraq and Libya.

In sum, the present identity-politics divisiveness is not a sustainable model for a multiracial nation, and it will soon reach its natural limits one way or another. On a number of fronts, if Americans do not address these growing crises, history will. And it won't be pretty.