The Rapid 'Progress' of Progressivism

Victor Davis Hanson
|
Posted: Mar 08, 2018 12:01 AM
Share   Tweet
The opinions expressed by columnists are their own and do not necessarily represent the views of Townhall.com. 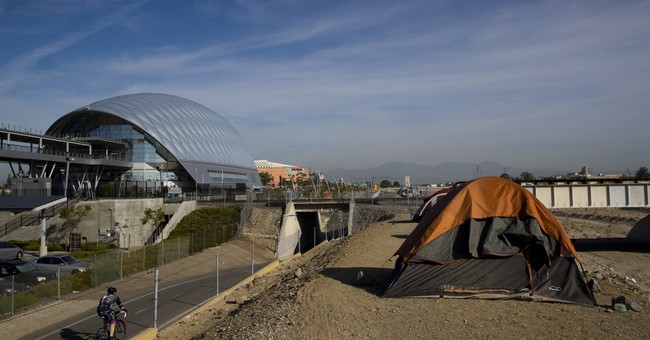 Not long ago I waited for a flight to board. The plane took off 45 minutes late. There were only two attendants to accommodate 11 passengers who had requested wheelchair assistance.

Such growing efforts to ensure that the physically challenged can easily fly are certainly welcome. But when our plane landed -- late and in danger of causing many passengers to miss their connecting flights -- most of the 11 wheelchair-bound passengers left their seats unassisted and hurried out. It was almost as if newfound concerns about making connections had somehow improved their health during the flight.

Two passengers had boarded with two dogs each. No doubt the airlines' policy of allowing an occasional dog on a flight is understandable. But now planes are starting to sound and smell like kennels.

Special blue parking placards were initially a long-overdue effort to help the disabled. But these days, the definition of "disabled" has so expanded that a large percentage of the population can qualify for special parking privileges -- or cheat in order to qualify.

In California, 26,000 disabled parking placards are currently issued to people over 100 years of age, even though state records list only about 8,000 living centenarians.

Current crises such as homelessness and illegal immigration did not start out as much of a public concern.

Originally, progressive politicians felt that cities should bend their vagrancy laws a bit to allow some of the poor to camp on the sidewalks. Bathroom and public health issues were considered minor, given the relatively small pool of so-called "street people."

Few objected to illegal immigration in the 1960s and 1970s. Foreign nationals came unlawfully across the border in relatively small numbers -- thousands, not millions. Fifty years ago, America was eager to assimilate even the few arrivals who arrived illegally. Not now. The melting pot gave way to the identity politics of the tribe that asks little integration of the newcomers.

Whether out of guilt or out of fear of being perceived as exclusionary by harder leftists, progressives cannot, or will not, draw realistic limits to illegal immigration or homelessness. Yet both cost the law-abiding public billions of dollars in social services, often at the expense of American poor.

This rapid spread of progressivism leads to an endless race for absolute equality and an erosion of prior rules. It also makes once-liberal positions seem passe, recasting those positions as dangerously reactionary.

In 2008, Barack Obama ran for president on a number of Bill Clinton's centrist Democratic policies. Obama opposed gay marriage as contrary to his own Christian beliefs.

Obama supported increased security along the border with Mexico. As a senator, he had voted for a 2006 measure to create 700 miles of new fencing along the Mexican border.

But by the time Obama sought re-election in 2012, progressives were routinely labeling Obama's positions on gay marriage and immigration as homophobic and nativist, respectively.

Not now. Anyone who doubts that there is an existential man-caused threat to the planet -- requiring the radical and costly reconstruction of the global economy and society -- is considered a "denier," deserving of professional ostracism or worse.

In the eternal search for perfect justice and equality, what starts out as liberal can quickly end up as progressively absurd. The logic of equality of result, rather than equality of opportunity, demands that there is always one more group, one more grievance, one more complaint against the shrinking and overwhelmed majority.

The conservative ancient Athenian philosopher Plato once made his megaphone Socrates lament that in ancient Athens' nonstop search for perfect equality, soon even the horses would have to be accorded the same privileges as humans.

Socrates' fantasy was an exaggeration intended as a reminder about the craziness of always-creeping mandated equality. Now it seems not far from the mainstream positions of animal-rights groups.

If we insist that the human experience is not tragic and cyclical, but instead must always bend on some predetermined arc to absolute equality and fairness, then unfortunate results must follow.

One, what is welcomed as progressive on Monday is derided as intolerable on Tuesday. The French and Russian revolutions went through several such cycles. After reformers had removed absolute rulers, the reformers were soon derided as too timid. Then came far more radical revolutionaries, who were in turn beheaded or shot as dangerous counter-revolutionaries.

Second, when rules and regulations are always watered down as too exclusionary, the descent to no rules is quite short. The ultimate destination is nihilism and chaos. We see that now in Venezuela and Cuba -- and increasingly in California as well.