Victor Davis Hanson
|
Posted: Apr 28, 2016 12:01 AM
Share   Tweet
The opinions expressed by columnists are their own and do not necessarily represent the views of Townhall.com. 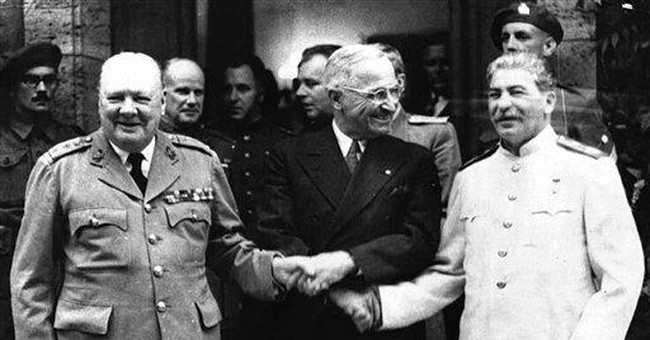 While in London last week, President Obama waded into the upcoming British referendum about whether the United Kingdom should stay in the European Union.

Controversy followed his lecture about the future of the Anglo-American relationship should Britain depart the EU. Obama also implied that without an EU, the United States might again be dragged into European squabbling, as it had been in the prior world wars.

Americans might take this occasion to reflect on Britain's role in World War II.

Before the war, the League of Nations had done nothing to deter the future Axis powers from invading or annexing Albania, Austria, China, Czechoslovakia and Ethiopia.

Britain's alliance with France might have deterred Nazi Germany had Winston Churchill, not Neville Chamberlain, been prime minister in 1939. Or an isolationist United States might have helped had it been willing to conclude a defense pact with the Western European democracies.

What ensured a war were the appeasement of Nazi Germany by Britain and France, the isolation of the United States from global responsibilities, and the collaboration of the Soviet Union with Adolf Hitler. All three developments combined to convince Hitler that he could bully or invade his neighbors without consequences.

America entered the war on Britain's side in late 1941, after more than two years of war that saw Hitler consolidate a continental empire larger than the present European Union. The United States declared war on Nazi Germany and fascist Italy on Dec. 11, 1941 -- but only after the two Axis powers declared war on us first. Had Hitler and Italy's Benito Mussolini not declared war after Japan's Dec. 7, 1941, surprise attack on Pearl Harbor, America may well have concentrated on defeating Imperial Japan and stayed neutral in the European theater.

Great Britain was the only major power to fight for the entire duration of World War II, from its beginning after the invasion of Poland on Sept. 1, 1939, until the surrender of the Japanese in Tokyo Bay on Sept. 2, 1945.

In late June of 1940, after the fall Western Europe, Britain was the only major power in the world still resisting Nazi Germany. Otherwise, all of Europe was either occupied by Hitler, neutral, or supposedly neutral but surreptitiously aiding the Third Reich with shipments of supplies.

Josef Stalin's Soviet Union had become a de facto ally of Nazi Germany in August 1939 with the signing of a non-aggression pact. The Russians supplied Germany with key resources that helped the Luftwaffe bomb a solitary Britain during the Blitz of 1940-1941. Nearly 50,000 British civilians were killed by German bombers, cruise missiles and rockets -- while America's continental homeland remained all but untouched.

Britain, along with soon-to-be-defeated France, was also the rare major combatant that entered the war on the principle of aiding a weaker ally. Germany, Italy and Japan all surprise-attacked neutral nations to instigate war.

The Soviet Union flipped sides to the Allies, but only when Nazi Germany turned traitor and attacked its former partner on June 22, 1941. And the United States entered the war only after Japan hit Pearl Harbor.

In terms of population and territory, Great Britain was the smallest of what became known as the "Grand Alliance" of America, Britain and Russia. Yet its military, research and leadership proved essential for the Allied victory.

Some of America's iconic World War II weapons were, in fact, vastly improved by British engineering, from the up-gunned Sherman Firefly tank to the P-51 Mustang and its superb Rolls-Royce Merlin engine.

When the U.S. entered the European theater in 1942, the British offered advice about how best to fight the German war machine. Some of World War II's most astute war planners and strategists -- Admiral Andrew Cunningham, Field Marshal Alan Brooke, and Marshals of the Royal Air Force Charles Portal and Arthur Tedder -- were British.

Winston Churchill was the first major Western statesman to warn about Hitler and the first to predict the Cold War that would follow the Allied victory in 1945.

Britain helped America in World War II as much America did Britain. We should keep that contribution in mind in speaking softly and preserving our long and mutually advantageous partnership.