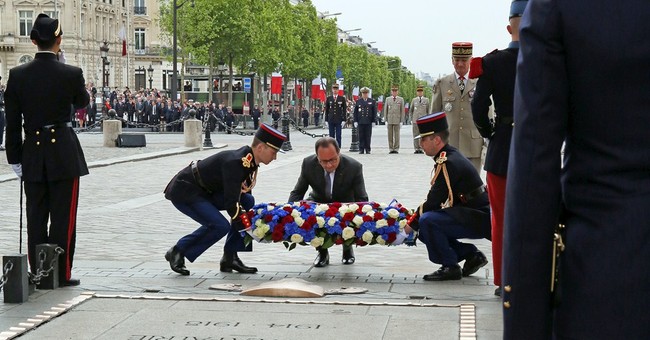 May 8 marked the end of World War II in Europe 70 years ago -- a horrific conflict that is still fought over by historians.

More than 60 million people perished -- some 50 million of them in Eastern Europe, the Soviet Union and China.

The prewar Soviet state in the 1920s and 1930s had killed perhaps 20 million of its own citizens in purges, exiles, collectivizations, forced famines and show trials. Then it lost an estimated 25 million soldiers and civilians to the German army on the Eastern Front. Hitler's Germany by late 1942 had occupied almost 1 million square miles of Soviet ground.

The Soviet Red Army would eventually be responsible for three quarters of Germany's WWII casualties, but at a cost of approximately 9 million dead of its own combatants. Nevertheless, the Allied defeat of the Axis powers is more complicated than just the monumental and heroic sacrifice of the Soviet soldier.

World War II started largely because the Soviet Union had had assured Hitler that the two powers could partner up to divide Poland. With his eastern rear thus secure, Hitler then would be free to fight a one-front war in the West against the European democracies.

The Soviet Union only entered the war after it was double-crossed by Hitler in June 1941. Before the surprise German invasion, the Soviets had supplied Germany with substantial fuel, food and metals to help it bomb Great Britain into submission. For all practical purposes, Russia had been Nazi Germany's most useful ally.

Duplicitous Soviet dictator Joseph Stalin at one time or another both fought against and followed non-aggression arrangements with every Axis power -- Germany, Italy and Japan. In contrast, the United States was the only major power of the war that did not start fighting until it was directly attacked.

The war in Europe was not just won with Soviet blood. When World War II started, America was isolationist and the Soviet Union collaborationist. After the fall of France in June 1940, Great Britain until June 1941 alone faced down the huge Nazi Empire that ranged from the Arctic Circle to the Sahara desert. British Prime Minister Winston Churchill's steadfast leadership, Britain's superb air force and its indomitable Royal Navy ensured that even when outnumbered, isolated and bombed, England would be unconquerable.

Once the United States entered the war after the attack on Pearl Harbor, the Axis cause was largely doomed. America mobilized 12 million soldiers -- about the same number as did the Soviet Union, despite having a population of about 40 million fewer citizens.

American war production proved astonishing. At the huge Willow Run plant in Michigan, the greatest generation turned out a B-24 heavy bomber every hour. A single shipyard could mass-produce an ocean-going Liberty merchant ship from scratch in a week.

In just four years, the United States would produce more airplanes than all of the major war powers combined. Germany, Japan, Italy and the Soviet Union could not build a successful four-engine heavy bomber. America, in contrast, produced 34,000 excellent B-17s, B-24s and B-29s.

By 1944, the new U.S. Navy had become the largest in the history of civilization at more than 6,000 ships. Its B-29 heavy bomber program and Manhattan Project efforts together cost more $50 billion in today's dollars.

America sent troops throughout the Pacific islands, and to North Africa, Italy and Western Europe. The United States staged two simultaneous bombing campaigns against Germany and Japan while conducting surface and submarine campaigns against all of the Axis powers.

At the same time, the U.S. supplied the Soviet Union with 400,000 heavy trucks, 2,000 locomotives, 11,000 railcars and billions of dollars worth of planes, tanks, food, clothing and strategic resources. By 1943-44, the U.S. also supplied about 20 percent of Britain's munitions.

If the measure of wartime success is defined by quickly defeating and humiliating enemies at the least cost in blood and treasure, then America waged a brilliant war.

Of the major powers, only America's homeland was not systematically bombed. It was never invaded. While its 400,000 fatalities were a terrible cost of victory, the United States lost the smallest percentage of its population of any major power.

America did not win World War II alone. But without the United States, the war against Axis fascism would have been lost.