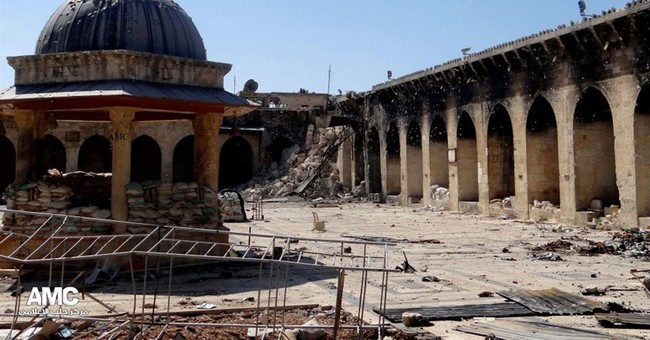 Since antiquity, the Middle East has been the trading nexus of three continents -- Asia, Europe and Africa -- and a vibrant birthplace to three of the world's great religions.

Middle Eastern influence rose again in the 19th century when the Suez Canal turned the once dead-end Eastern Mediterranean Sea into a sea highway from Europe to Asia.

With the 20th century development of large gas and oil supplies in the Persian Gulf and North Africa, an Arab-led OPEC more or less dictated the foreign policy of thirsty oil importers like United States and Europe. No wonder Centcom has remained America's military command hot spot.

Yet insidiously, the Middle East is becoming irrelevant. The discovery of enormous new oil and gas reserves along with the use of new oil-recovery technology in North America and China is steadily curbing the demand for Middle Eastern oil. Soon, countries such as Kuwait, Saudi Arabia and Iran are going to have less income and geostrategic clout. In both Iran and the Gulf, domestic demand is rising, while there is neither the technical know-how nor the water to master the new art of fracking to sustain exports.

The recent Boston bombing reminded the West that nearly 12 years after 9/11, most terrorism still follows the same old, same old script -- committed by angry young men with Muslim pedigrees claiming to act on radical Islamist impulses, without much popular rebuke from the Muslim world.

There is not much left to the stale Middle East complaint from the 1960s that Western colonialism and imperialism sidetracked the region's own natural trajectory to democracy. After the derailed Arab Spring, the world accepted that the mess in the Middle East is not imported, but rather the result of homegrown tribalism, sexual apartheid, religious intolerance, anti-Semitism, illiteracy, statism and authoritarianism.

Revolutionary theocrats always seem to follow the ouster of fossilized thugs. "Reformers" who were "elected" after the fall of the Shah of Iran and Hosni Mubarak in Egypt on spec conjured up the same old bogeymen as their predecessors, subverted the rule of law in the same old fashion, and wrecked the economy in the same old manner.

Barack Obama senses that there is no support for American intervention in the Middle East. Even his idea of "leading from behind" in Libya led to the loss of American personnel in Benghazi. After Iraq, the U.S. will not nation-build in Syria. Apparently, Americans would rather be hated for doing nothing than be despised for spending trillions of dollars and thousands of lives to build Middle East societies.

The U.S. still worries about tiny democratic Israel surrounded by existential enemies pledged to destroy the Jewish state. But Israel's own sudden oil and natural gas bonanza is enriching its economy and will soon offer a source of reliable fuel supplies to nearby Europe.

Most likely, Europe's past opportunistic disdain of Israel and fawning over Arab autocracies were based entirely on oil politics. In the future, the fair-weather European Union will as likely move away from the Middle East as it will pledge a newfound friendship with the once unpopular but now resource-rich Israel.

Visiting Persepolis, the Egyptian pyramids, Leptis Magna, or the Roman and Christian sites in the West Bank, Lebanon and Syria is not worth the madness that is now the price of Middle East tourism. The European Union and the United States are tired of Middle East terrorism -- after 50 years of Yasser Arafat's secular brand and Osama bin Laden's Islamic bookend.

Europe's southeastern Mediterranean flank on the Middle East is a financial and political mess. Most of the West is as likely to shun bankrupt Greece as it is to be wary of Recep Erdogan's new Ottoman Turkey.

While the Middle East failed to transform its oil riches of the last half-century into stable, transparent societies, Asia globalized and embraced the free market.

The resulting self-generated riches in the Pacific do not derive from the accident of oil under the ground of Singapore, Hong Kong or Taipei, but rather from global competitiveness and internal reforms. If China, India, Japan, South Korea and Taiwan 60 years ago were as poor as the Middle East, they are now the economic equals to Europe and North America. Their motto is to borrow from and then beat -- not envy or blame game -- the West.

For now, Western tourists and students still mostly avoid Amman, Baghdad, Benghazi, Cairo and Damascus. American soldiers are drawing down from the bases of the Middle East. And soon, huge American-bound oil tankers will not crowd each other at the docks of the Persian Gulf.

You see, the Middle East is not so much dangerous, challenging or vital to Western interests as it is becoming irrelevant.