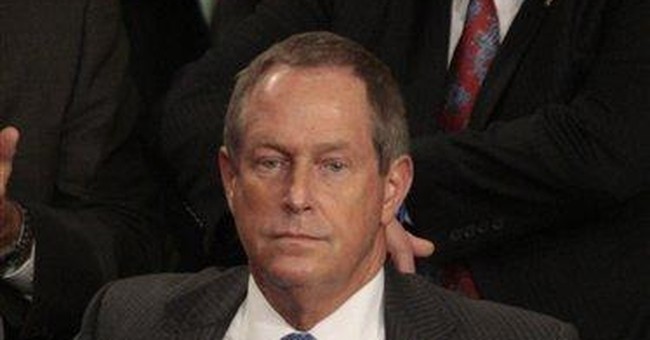 Democrats are still not satisfied with my former colleague Joe Wilson’s apology after he shouted “You lie!” when Obama claimed in his address to Congress that “There are also those who claim that our reform efforts would insure illegal immigrants. This, too, is false.  The reforms I'm proposing would not apply to those who are here illegally.”

If he does not continue to grovel and apologize they are threatening to discipline him for his violation of what Nancy Pelosi’s spokesman calls the “House rules of decorum.”

Whether or not he breached House decorum, Joe’s actions were both true and effective.  Obama admitted as much by proposing changes to the bill to limit illegal aliens’ access to Obamacare.  Joe’s apology is enough, but Obama’s concessions are not.

When Obama made his speech, there were a number of glaring and intentional loopholes to the Democrat’s pretend ban of illegal aliens in the House healthcare bill HR 3200.

Virtually every single means tested government program requires that applicants are screened by the “Systematic Alien Verification for Entitlements” [SAVE] program to ensure that they are not illegal aliens.

But this provision is not included in HR 3200.  This is not an oversight.  Republicans twice introduced Amendments to require the SAVE program be implemented, and it was voted down by the same Democrats who hypocritically added the clause that ostensibly barred illegals.

Furthermore, the bill does not say anything about illegal aliens not being able to participate in the taxpayer subsidized “Health Insurance Exchange” program.  The Congressional Research Service reported that it “does not contain any restrictions on non-citizens—whether legally or illegally present, or in the United States temporarily or permanently—participating in the Exchange”

Conservatives tried to bring these facts to the forefront of the healthcare debate, but the media and the Democrats simply ignored them or repeated their lie that illegal aliens would not receive government funded healthcare.

But Joe Wilson forced them to face the facts.  On Friday night, Obama announced that he wanted to use the SAVE program and bar illegals from the Health Insurance Exchange.

This does not mean Obama was telling the truth when Joe called him a liar.  On the contrary, it is an admission that before Joe called out Obama illegals were eligible.

Assuming the House follows through with Obama’s newly proposed changes, there are still more loopholes.

As the open borders lobby never fails to remind us, many illegal aliens have family members who are here legally.  Often, they are “anchor babies” born to illegal aliens on US soil.  There is nothing in to keep them from getting healthcare.  The Congressional Research Service issued a report noting,

“There could be instances where some family members would meet the definition of an eligible individual for purposes of the credit, while other family members would not… H.R. 3200 does not expressly address how such a situation would be treated. Therefore, it appears that the Health Choices Commissioner would be responsible for determining how the credits would be administered in the case of mixed-status families.”

It doesn’t take a clairvoyant to guess where Obama’s handpicked bureaucrats will come down on this issue.

But even if all the loopholes are closed, they will be meaningless if amnesty is given to illegal aliens.   If passed, Obamacare will not go in effect until 2013.  Obama wants to pass amnesty in the beginning of 2010.   He told Katie Couric he wanted to

“create a situation where we're dealing with illegal immigration, so that we don't have illegal immigrants. And we've got legal residents or citizens who are eligible for the plan. And I want a comprehensive immigration plan that creates a pathway to achieve that.”

Turning illegal aliens into legal residents does not change these costs.

The American people are overwhelmingly on our side.  According to the latest Rammussen Poll, 83% of American voters believe that applicants for government-subsidized healthcare should be required to show proof of U.S. Citizenship.

This is why the open borders lobby is effective only when they hide their real agenda.  In July, Roll Call interviewed an anonymous Congressman from the Congressional Hispanic Caucus,

Tom Tancredo represented Colorado’s 6th Congressional District from 1999 until 2009 where he chaired the 100+ member bipartisan Immigration Reform Caucus.  He currently serves as co-chairman of Team America PAC and president of the Rocky Mountain Foundation.