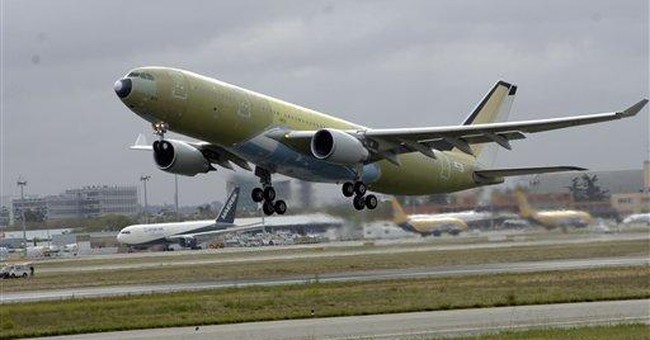 Hugh Hewitt’s March 20 op-ed, “What Do Voters Think?” concludes that voters will rise in indignation over the Air Force’s decision to award a $35 billion contract to Northrop Grumman rather than Boeing for the KC-45A tanker. He seems to forget that the reason the Air Force even held a competitive bidding process for the tankers was outrage from across the country over the original earmark for a new tanker lease that was tucked into the 2003 Defense Appropriations Act conference report by Senator Ted Stevens (R-Alaska), without any hearings or opportunity for debate, in order to help subsidize Boeing’s 767 production line.

Mr. Hewitt seems to believe that the same factors that led to objections over the Dubai ports deal apply to the tankers, but they are separate matters. The original tanker deal was the most expensive earmark in history and corporate welfare of the worst kind. Originally thought to be just a bad deal for taxpayers because it was a no-bid lease, it turned out to be much more. The deal led to a major scandal. There were guilty pleas and jail time for both the Air Force’s chief negotiator on the contract and Boeing’s number-two corporate officer, and Boeing was fined more than $600 million.

According to the Air Force’s analysis of the proposals by Boeing and Northrop Grumman, the winning plane was better than the loser in four out of five major criteria. With the benefit of competition, the Air Force was able to drive down cost and, apparently, found the best aircraft at the best price. If the Government Accountability Office delivers a clean bill of health for process, rejects Boeing’s protest, and allows the contract to stand, Congress should not intervene to change the result.

Members of Congress are trying to turn the decision into a matter of national security, but it really is all about jobs. Members from Washington and Kansas are particularly incensed about the decision, because that is where Boeing has facilities. Those in Alabama and other states that will benefit from Northrop’s construction are pleased to have the business. While some say 40,000 jobs would have been provided by Boeing, it is disingenuous and inaccurate to say all of them would be “exported,” as Democratic National Committee Chairman Howard Dean told CNN on March 13. Indeed, on March 12, ABC News reported that Northrop was planning to create 48,000 U.S. jobs.

By law, the Air Force was prohibited from awarding on the basis of extrinsic factors like jobs creation and pending W.T.O. litigation when trying to decide which aircraft most satisfies the needs of our servicemen and women at the greatest value. Using both existing regulations and the acquisition strategy that the Pentagon itself developed and approved in the wake of the tanker lease scandal, the Air Force was required to conduct a competition – meaning that the best product should win.

As a self-proclaimed free trader, Mr. Hewitt understands that this is a global economy and many manufactured items are made up of parts that were designed and created from all over the world. As the Bureau of Labor Statistics states, “This healthy competition among both domestic and foreign manufacturers has dramatically increased productivity and improved efficiency.”

As for national security concerns, there is no reason for alarm. The KC-45A will be built by American workers in the EADS plant in Mobile, Alabama. The conversion to a military tanker with sensitive technology will be performed at the neighboring Northrop Grumman facility. Ultimately, the protection of any important technology is up to the Department of Defense.

Regardless of the outcome of Boeing’s appeal, having once created a sweet deal for the company through an earmark, it would not be far-fetched to believe that Sen. Stevens, Rep. John Murtha (D-Pa.), or another member would try to sneak a provision into the 2009 defense authorization or appropriation bill that would “guarantee” some of the work for Boeing. That would undermine some of the renewed confidence that taxpayers should have in the procurement process.

Efforts to undue the tanker contract based on vitriol and politics should be opposed. All that members of Congress and other critics should really be concerned about is getting the best deal for the taxpayers.