The Cause of High College Tuition 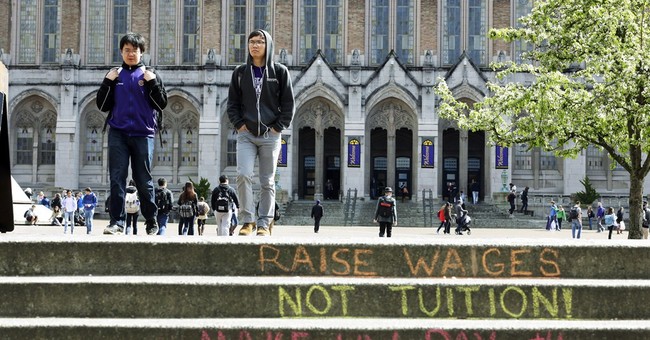 Ah, the autumn is upon us. College campuses are buzzing with activity — as college kids and their parents rack up massive debt to cover the cost of high tuition.

The origin of such debt is interesting to trace.

In 1987, reports Slate, President Reagan's secretary of Education, Bill Bennett, published a New York Times op-ed that blamed the growing cost of tuition on “greedy colleges” that raised tuition every time the federal government increased financial aid and the amount students could borrow — funds that were intended to help more kids get college degrees got swallowed up by universities looking to boost revenue.

Boy, did Bennett's theory hold true in 1992. In that year, a sweeping change in federal lending laws greatly increased borrowing limits. The change opened the loan program to virtually everyone. In 1993 and 1994, borrowing increased 57 percent to a then-staggering $24 billion.

“From 1910 to about 1978, tuition fees rose about 1 percent a year adjusting for inflation,” writes Richard Vedder in Forbes. “Since 1978, fee increases have over doubled, to closer to 3 percent a year, reflecting the enormous growth in student loan and grant programs.”

Many in academia say it is because their costs are rising. They say the government hasn't increased funding fast enough. They say compliance with federal regulations is costly. They say they have to buy computers and other expensive tools to educate students.

What they don't say is they have spent millions to attract pampered college kids to their schools.

Colleges have been on a spending spree, frantically trying to outdo their competitors. They've been building fancy food courts, Olympic-size pools and air-conditioned dorms. They boast some of the finest auditoriums and sports arenas in the world.

According to The Associated Press, many universities have been tearing down traditional dormitories in favor of upscale living quarters — posh facilities that offer private suites, granite countertops, designer furniture and satellite TV.

Today's college kids don't have to worry about much. Maid and laundry services are now available. Heck, kids don't even have to pack up the station wagon when moving in. Moving companies do that for them. Heck, many colleges and universities have spent millions improving everything but the quality of education.

In fact, the quality of education has probably gotten worse. In the old days, experienced professors routinely taught 12 hours of courses per week. Today nearly 30 percent of all professors at research universities teach fewer than four hours per week; what they do with the other 36 hours that most people work, nobody knows.

The real reason college tuition has kept going up is, believe it or not, because colleges have been able to keep raising it.

Why? Because for years, many parents and students believed that if they spend more for college, they must be getting a better, more prestigious product — and because easy borrowing has allowed millions of college kids to saddle themselves with massive debt payments upon graduation.

But now that so many graduates of premium-cost colleges are underemployed or still out of work, many are finally beginning to revisit that thinking. Is college worth the investment, many are asking.

In any event, Bill Bennett was right in 1987. Well-intentioned government programs have created a high-tuition, high-debt mess.