Todd Starnes
|
Posted: Oct 30, 2017 11:01 AM
Share   Tweet
The opinions expressed by columnists are their own and do not necessarily represent the views of Townhall.com. 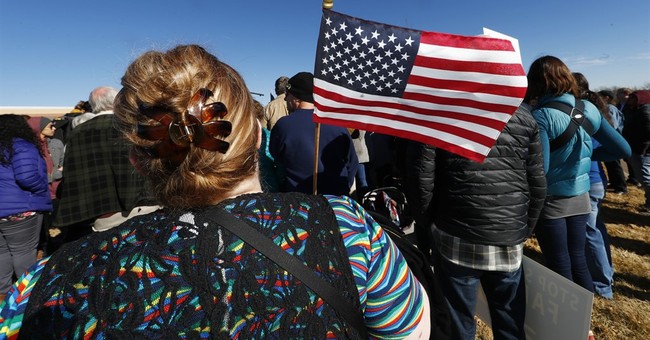 American patriotism is not exactly in vogue these days among Democrats, Hollywood starlets and the National Football League.

It’s considered fashionable among the social justice crowd to take a knee during the national anthem, burn the American flag and dishonor our troops.

But that’s hardly the prevailing opinion across the fruited plain – where tens of thousands of young teenagers are rising up and publicly declaring their love for America and their devotion to freedom.

Last week, some 65,000 members of the Future Farmers of America Organization gathered in Indianapolis to celebrate our great nation.

I received a video of the jaw-dropping celebration from Deb Zippel, one of our faithful readers in Minnesota. Her daughter is studying to be an agricultural education teacher and was in attendance at the gathering. Click here to watch the video.

Jaci Dietrick, an FFA member from Newcastle, Oklahoma, walked onto the stage and delivered a stirring rendition of “God Bless the USA.”

“Ladies and gentlemen, we live in the greatest country in the world and that’s only because we have men and women fighting daily for that freedom,” she told the massive crowd. “Thank you for standing.”

And that’s exactly what they did – tens of thousands of young people rose to their feet and began singing along with vocalist.

And when she started crooning about those lakes in Minnesota and the in hills in Tennessee – well, the young patriots dutifully let out hoots and hollers.

When the singer concluded the song, the entire audience erupted with boisterous chants of “USA, USA”.

You would be hard pressed to find any snowflakes laden with microaggressions in the FFA.

“These kids are the ones that get it,” Miss Deb told me. “They are hard working. They don’t expect it to be handed to them.”

Miss Deb said her daughter worked two jobs to pay her way through college – “including getting up at 4 a.m. to milk cows and working an organic farm and squishing potato bugs by hand.”

It’s that kind of hard work and determination that makes America the most exceptional nation on the planet.

Thanks to young farmers across the fruited plain for reminding us there’s a generation rising that is proud to be American!