Todd Starnes
|
Posted: Jan 12, 2017 12:01 AM
Share   Tweet
The opinions expressed by columnists are their own and do not necessarily represent the views of Townhall.com. 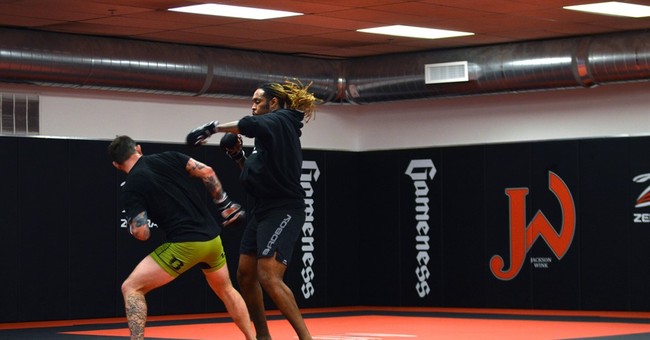 By day Pavel Fesyuk is an exterminator and by night he's a cage fighter.

Click here for a FREE subscription to Todd’s newsletter: a must-read for Conservatives!

On Tuesday, Pavel was on his way to a pest control appointment when he came across a motorist standing in the roadway.

“I was approaching a red light and I saw the man standing at the back of his car,” Pavel told me. “I thought maybe he was trying to flag someone down.”

It was clear the man was in distress. He was choking to death.

Pavel jumped out of his vehicle and rushed to the man’s side – while the dash cam video in the company van recorded the entire incident. I've posted the video at the bottom of this column.

He tried patting the man on the back – hoping that would dislodge whatever was in the guy’s throat – but it did not work.

And performing the Heimlich maneuver proved to be a bit difficult because the victim was a bit larger than Pavel.

In addition to being a fighter, Pavel appeared on two seasons of the hit television show America Ninja Warrior. So, he knows a thing or two about improvising.

And that’s how he came up with the idea to employ a maneuver he normally uses on fighters during cage matches.

“I got a Gable Grip on the guy and just picked him up off the ground,” Pavel said.

The improvised emergency maneuver did the trick and the blockage was cleared in a matter of just a few seconds.

“He thanked me but it all happened so fast I didn’t even get his name,” he said.

Back at the pest control company, Pavel’s coworkers were shocked by the video. They called him a hero – but that’s not how Pavel sees things.

“I just helped somebody out. I took 30 seconds out of my day to help somebody,” he said.

Caleb Fabry, the president of Town and Country Pest Solution, sent me a copy of the video on Facebook.

“This guy showed us in this video that nothing matters but life and love,” Mr. Fabry said. “I think that is one of the most touching parts of this whole video.”

And that brings me back to the company’s ethos.

“Yes, we kill bugs and remove animals from people’s homes, but more importantly, we do what we do because we love helping others, plain and simple,” Mr. Fabry said. “We believe that our business is successful and in the good place that we are in only because of our God. We give Him all the glory.”

I believe there is a lesson for us to learn from this modern-day parable that unfolded on a street corner in Rochester. The gentleman who nearly choked to death told Paul something that shook me to my core.

“He said he was trying to get people to help him, but they kept driving around him. He was choking and nobody cared,” Pavel said.

But a Samaritan, as he traveled, came where the man was; and when he saw him, he took pity on him,” the Gospel of Luke records.

Pavel Fesyuk is that Good Samaritan. He offered a helping hand to a stranger in need. He had mercy on him.